James is a native Californian who grew up surfing and diving outside of San Luis Obispo, CA (approximately 2.5 hours south of Monterey). He arrived at CSUMB in January 2007 as an active scientific diver, having worked for the National Oceanic and Atmospheric Administration (NOAA) in New England and a private research institute in southern California. Immediately upon arrival at CSUMB, James was introduced to Frank Degnan, the instructor for the recreational dive courses and the part-time Diving Safety Officer. Together, and despite a variety of hurdles, they developed the scientific diving program, ultimately merging all dive courses, personnel and resources under the umbrella of the new Department of Marine Science into what is now the largest university dive program in the country.

James has conducted SCUBA-based research on six continents (no trips to Antarctica yet) and has been a participant in six missions to the Aquarius Undersea Laboratory in the Florida Keys (four as a saturation diver, two as a member of the surface diving team). Much of James' research involves the collection of undersea imagery, including stereo diver-operated video and, more recently, 360-degree video for virtual reality, to better understand where fish are and why they're there. 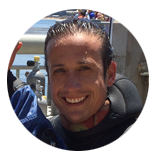 For the past 10 years, Drew has held positions in the scientific and occupational diving field, starting first as a student and dive faculty member at CSUMB, then as a supervisor in the Monterey Bay Aquarium's dive operation and now as the Diving Safety Officer of CSUMB's Research Diving Program. These professional experiences reflect Drew's passion for environmental advocacy and teaching people safe and productive ways to interact with and study the natural world.

In his current role, Drew is responsible for the daily operations of the research diving program. On any given day, you may find him maintaining diving equipment, assisting with the instruction of all the our diving course offerings or working in the field with university research faculty and students on diving projects.

When Drew is not covered in grease in the dive locker or engaging and mentoring our dive students through the rigors of dive training and proficiency activities, he loves being out on the trail with his mountain bike or in the snow-capped mountains riding his snowboard. He also volunteers his time as a member of the Pacific Grove Hyperbaric Chamber and as a diver for the Monterey Bay Aquarium. 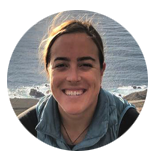 SCUBA diving has been a big part of Paulina's life since she was 12 years old. It created an interest in the ocean big enough to lead her to major in Aquatic Biology at UC Santa Barbara. She worked as a scientific diver for the Santa Barbara Coastal Long-term Ecological Research Lab laboratory her entire undergraduate career. After graduating, she started to work as a technician conducting kelp monitoring and studying invasive species. This would require diving multiple times a day, 3-7 days per week. Here she gained a great variety of skills such as handling small vessels, preparing and deploying oceanographic instrumentation, and CA fish, invertebrate, and algae identification. During her time as a technician, she was certified as a Divemaster and a SCUBA Diving Instructor, and would help teach Open Water Diving classes at UCSB.

She then decided to further her education by pursuing a Master of Science in Environmental Science at CSUMB. She continued to expand her scientific diving experience by working as a Teaching Assistant for MSCI.380 (Scientific Diving Techniques) and MSCI.455 (Marine Fish Ecology), and by volunteering as a diver at the Monterey Bay Aquarium. She currently works as a Lecturer teaching dive courses MSCI.282, MSCI.283, and co-teaching MSCI.380 and MSCI.485 (Marine Biogeography of California) with professor James Lindholm. She has really found a passion in helping students further their SCUBA diving career and always holds their best interest in hand.