Update: おめでとう and Congratulations to CSUMB Japanese Language and Culture major students Christopher Uhl and Trevor Bogna for their participation in the recent 46th Annual Japanese Speech Contest hosted by the Consulate-General of Japan in San Francisco. A sophomore at CSUMB, Uhl’s oratorial efforts gave him a Third Place recognition and were bested only by graduate students from Stanford University who took home the first and second-place awards, including a round-trip flight to Japan. Senior Trevor Bogna, major in both Japanese Language and Culture and Business Administration, also gave the contest his best effort and demonstrated his language and communications skills with a strong performance in this Level 4+ language. 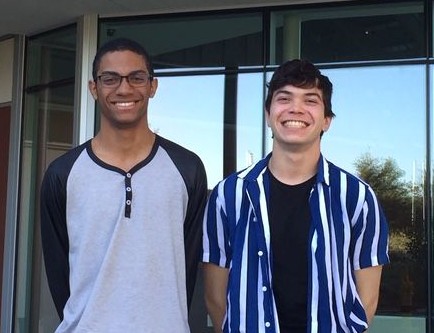 Dr. Shigeko Sekine, Professor of Japanese, coached the two major students through writing their speeches and refining their presentation of the works they wrote. Christopher’s speech, 小さな戦争の話 “A Short Story About the War,” provides a perspective on World War II in Okinawa through his grandmother's eyes. In 日本で学んだ事 “What I Learned in Japan,” Trevor discusses his experience of "failures" in his life and how he transformed his negative experience into the positive.