A walk in the woods

Two professors envision a trail connecting the campus with our community.

A Trail for Everyone

The brainchild of CSUMB professors, Scott Waltz and Fred Watson, FORTAG will make the area more accessible for people hoping to get outdoors and enjoy the peninsula. As Watson, a professor in the School of Natural Sciences, explains, they’re not just building a trail system, “but perhaps the nation’s best.”

View a gallery of maps of the envisioned trail system.

Before FORTAG, a number of advocates envisioned a trail from the beach to what was, at the time, land managed by the Bureau of Land Management.

“Fred and I came to that project separately,” explains Waltz, an associate professor in Liberal Studies. “But we ended up talking with one another and Fred suggested actually looking, given the current state of development, at what that corridor would look like.

“So Fred started doing some mapping and I started arranging meetings with some folks and talking about the opportunity this presented, and it grew from there.”

That was an estimated 240 meetings ago.

“We would look at a route and identify stakeholders for that route – landowners, municipalities, community groups,” says Waltz. “Then we just took the time to talk to them and said, ‘We have an idea,’ and we showed them a map that Fred made, and said, ‘Here’s what we think can happen here,’ and then they gave us feedback.”

The work they’ve put in is impressive.
— Virginia Murillo

By meeting with every person they could identify who would have an interest in FORTAG, Waltz and Watson were able to build a base of support that astonishingly has led to “no red flags.”

In November 2016, Monterey County voters approved a sales tax increment to fund a number of transportation projects, totaling $600 million. The Transportation Agency for Monterey County (TAMC) identified FORTAG as one of those projects, slated to receive $20 million, with an additional $1 million coming directly from TAMC’s state funding.

That is about half of the total budget needed to make this dream a reality, says Watson.

Next up, an EIR

“The next thing in front of us is to do a formal environmental review. We’re environmentalists and we hug trees, and we side-step every little thing that might be impacted by trail, because it’s a paved trail. It’s fundamentally about enhancing nature through people’s connection to nature and developing stewardship of nature,” Watson says.

TAMC has stepped up to be the lead agency for the environmental review, which Watson estimates will take about 18 months.

The EIR consultant will come on board in the summer, with work projected to last through December 2019, which will then give a “better sense of when the entire trail will be built and what parts will be built first,” explains Virginia Murillo, TAMC project manager for FORTAG.

“[Fred and Scott] have been great partners in all of this,” says Murillo. “The work they’ve put in is impressive – outreach and out in the field, gaining public support. It’s a great example of grassroots work, all while being professors.”

Fred Watson teamed with fellow CSUMB professor Scott Waltz and other volunteers to launch the Fort Ord Rec Trail and Greenway, aka FORTAG.

Once the EIR is certified, contracts will go out for final design and construction, a portion of which will depend on finding additional funding sources.

“It’d be great to start digging tomorrow,” says Watson, “but it’s more about knowing that we’ve got something really good, and whatever time it takes to make that happen it will take. It’s one of the luxuries of being a professor at a university. The university is invested in us and the ability to be a part of our community in the long term.”

The professors say that CSUMB’s backing proved to be a huge turning point for the project.

“The university has been extremely supportive and recognized the value of this trail for students and for the university community,” Waltz explains. “President Ochoa stepped right up and said, ‘This is a good idea, we encourage you to put together an MOU, and the university would be happy to look at it and sign it.’”

“We have been absolutely folded right in to the Master Plan. So the university hasn’t just been supportive, they’ve basically said, ‘We want part of this to be ours for our community,’” says Waltz. 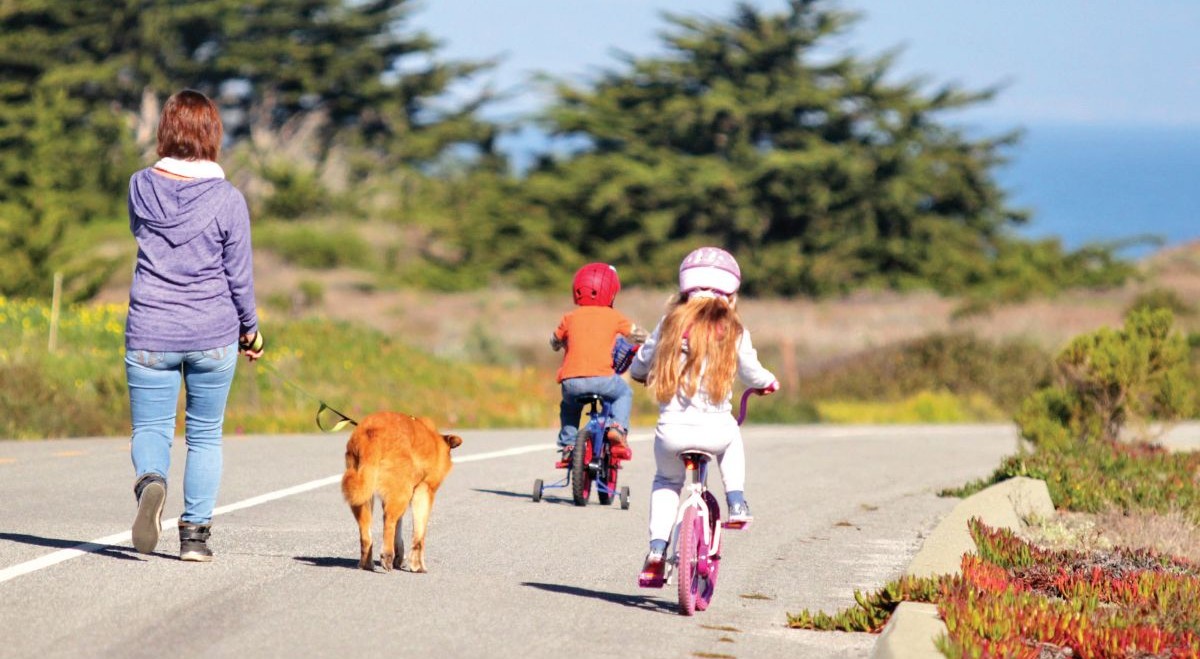 Photo by: FORTAG
Hikers on an existing trail where FORTAG will build a route.

“If you pull back and look at the whole trail route you can imagine it as three loops or three wheels,” Waltz says.

“There’s a circuit that traces around the city of Marina and reaches out into some of the areas just beyond Marina that are largely undiscovered at this point. There’s a loop that goes down and follows the rec trail to the Canyon Del Rey area, that goes through the parks there, that we call our sort of ‘string of pearls,’ and then comes into Del Rey Oaks and up.

Across the whole system we want to create opportunities for people to do outdoor art installations, or outdoor yoga pads, or painting clubs, or birding clubs...
— Fred Watson

“There’s also that middle loop that you can trace around CSUMB. That was not an accident. So CSUMB sits in the middle of the middle loop of the FORTAG route.”

“The whole thing, combined with the coastal rec trail, is over 30 miles,” says Watson. “And we’re about to build 25 of it and it is absolutely crucial that this thing is safe from many perspectives of safety – so that you are not just safe but you feel safe.”

FORTAG will also be accessible.

“People with a cane, people with a sore hip, people on a walker, people in a wheelchair, people on training wheels, people who know they wanna walk but the last time they did it there was a hill and it was just a drag,” explains Watson, “Just everybody in that category now where it just isn’t quite that easy to go for a walk, we wanna grab all them and say ‘Hey, this is not just easy but this is right there in front of you. You just gotta feel like doing it.’”

“The accessibility allows for paralympics and para-athletic events, which are taking place in the region, and we could create a perfect event course for that, too,” adds Waltz.

A public pathway that would stretch from the sands of the Monterey Bay National Marine Sanctuary to the steppes of the Fort Ord National Monument is poised to start environmental review.

Watson hopes the trail draws people from all walks of life.

“Across the whole system we want to create opportunities for people to do outdoor art installations, or outdoor yoga pads, or painting clubs, or birding clubs, lot of opportunity for native plant restoration - at the professional level but also at the level of getting kids engaged in creating a native planted landscape and maintaining that. For youth fitness programs, both formally through public schools and private schools, and also informally.

“The whole thing around the outside is 26.2 miles, which is a marathon. The Marina loop is 13.1, which is a half-marathon.”

Ever the professor, Watson currently has three grad students “working on a project to do all this detail survey in a place where we need to do a tricky bridge undercrossing. It’s pretty exciting to finally start plugging the teaching and learning experience into all this.”

Waltz adds, triumphantly, “FORTAG will be the birth of a thousand capstones!”