Walk into the Game Research Lab at CSUMB and look around. The tables of electronics and circuits only hint at the research being conducted.

Things get more interesting upon further examination, with prosthetic arms placed inconspicuously on shelves. In another room, virtual reality goggles lie next to sensors on tripods. A large whiteboard, resembling an air hockey table, is placed in the corner. A row of computers border a wall, joysticks sitting next to keyboards. 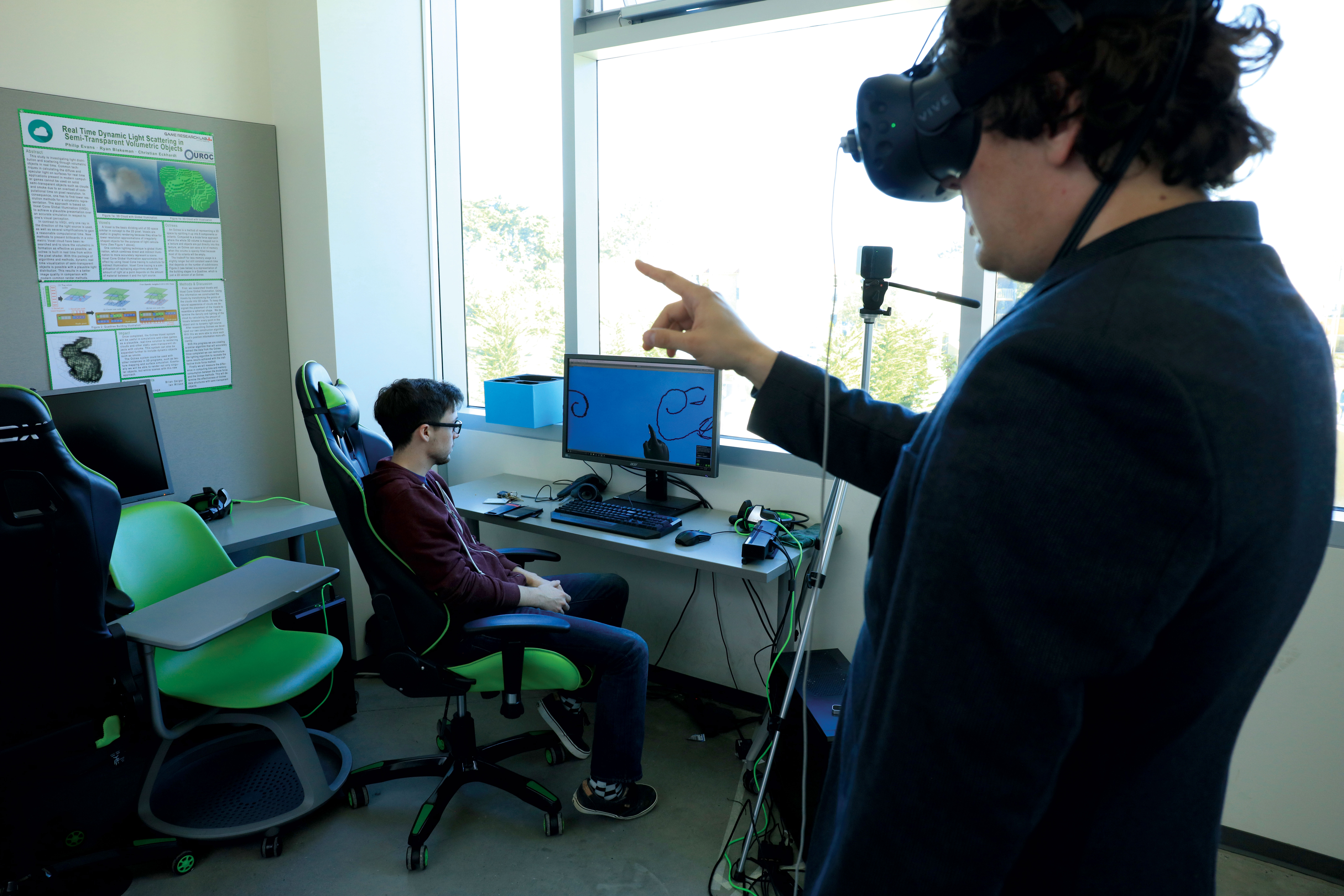 It looks like every kid’s ideal game room. But the research projects here could be an indicator of technology that will transform lives and the world.

Krzysztof Pietroszek, an assistant professor in the CSUMB School of Computing & Design, is the director of the Game Research Lab, which he founded last year. Pietroszek and a fellow colleague Christian Eckhardt oversee daily activities of the lab, utilized by many students for Capstone projects. Others come to tinker and explore. Being a part of the lab is not a for-credit class. Rather, it’s a resource for students that want to push boundaries and explore potential technological breakthroughs.

To Pietroszek, it’s more than experimenting. His main interest is utilizing technology to assist people with disabilities in practical, cost-effective ways. In addition, technology like virtual reality (VR) can make education widely accessible regardless of geographic location – and can serve as a training tool for fields such as medicine and architecture.

One of the more intriguing projects at the game design lab is the development of a low-cost prosthetic arm. The arm is 3D printable, meaning it’s created with successive layers of hard plastic material under computer control, sourced from data out of a digital model. 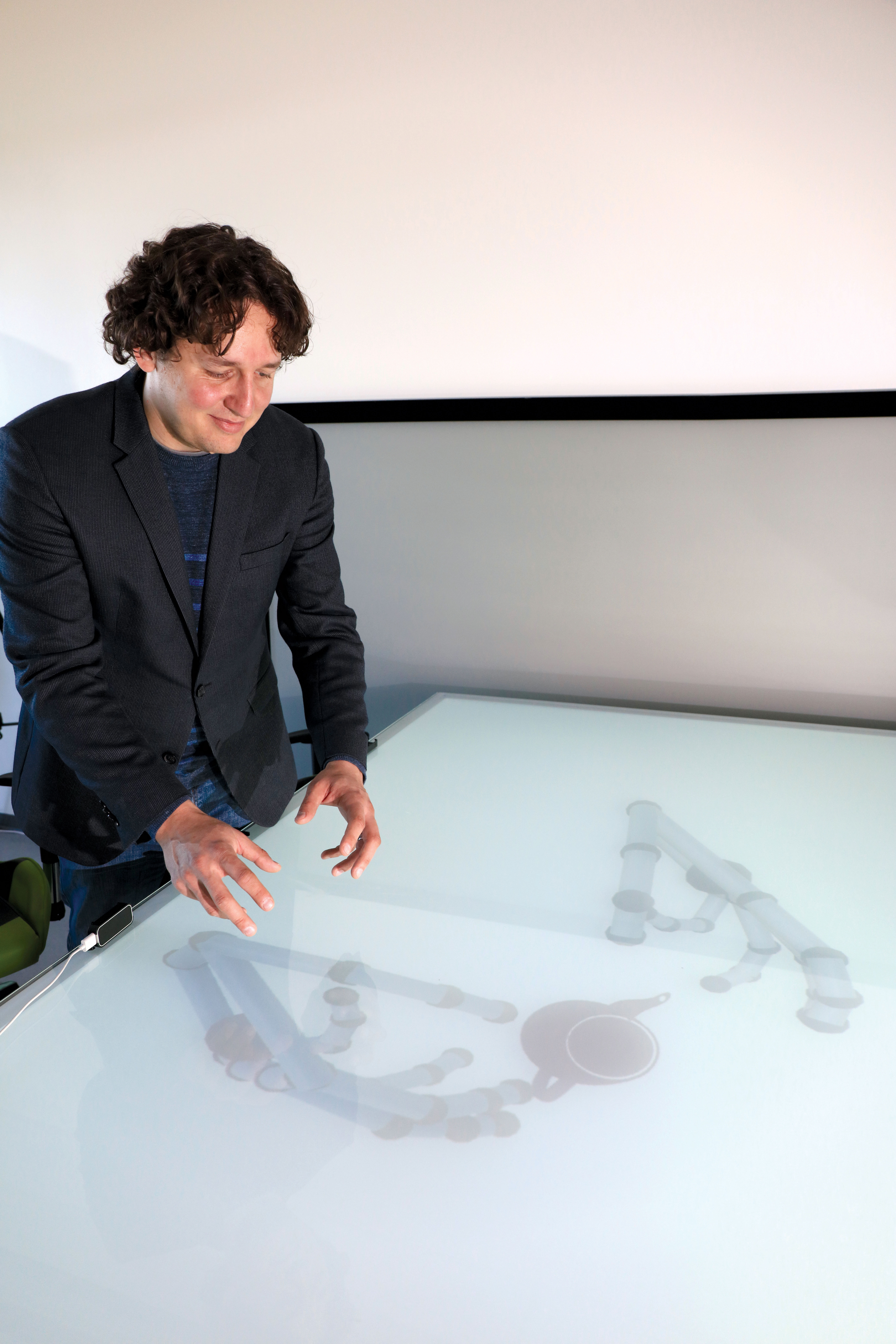 Krzysztof Pietroszek, assistant professor in the School of Computing & Design, uses a holographic table in the Game Research Lab.

The arm is controlled by flex sensors that are attached to the patient. It’s been tested by CSUMB student Morgan Juran, a computer science major, who was born missing the lower part of her left arm right below the elbow. In the lab, Eckhardt and his students attach the prosthetic arm via sensors to the end of Juran’s missing limb. She can then move the “fingers” of the robotic hand secured at the end of the prosthetic arm by using muscle movements in her left arm.

“Across the world, the number of amputees who have access to robotic prosthetics is minimal, especially in the developing countries due to the cost,” said Pietroszek. “The ultimate goal of a project like this would be a prosthetic arm designed as an open-source, free-to-print project. It could be distributed worldwide with the assistance of charity organizations.”

Pietroszek puts on VR goggles and demonstrates the classroom concept. By using his hand, he can “write” on a board in his virtual world, and what he’s writing will be seen on a physical whiteboard in an actual classroom by students. Students themselves can interact the same way. Again, distance is no object. The students could be on the other side of the planet. But the interactions are real time.

“We believe that ‘mixed reality participation’ may result in better learning outcomes than traditional online learning,” said Pietroszek. “It supports social interactions. It supports non-verbal communication. Effective modes of learning, such as peer-learning and active learning, are possible in VR experiences.”

And then there’s the whiteboard, placed in the corner. Turn it on and it’s a holographic table, straight out of a science fiction movie like “Minority Report.” Place your hand above it and a holographic image of your own hand floats in the board, mimicking your every movement. It’s an ideal tool for teaching simple medical procedures – or for creating virtual design when an architect is conceptualizing a building. 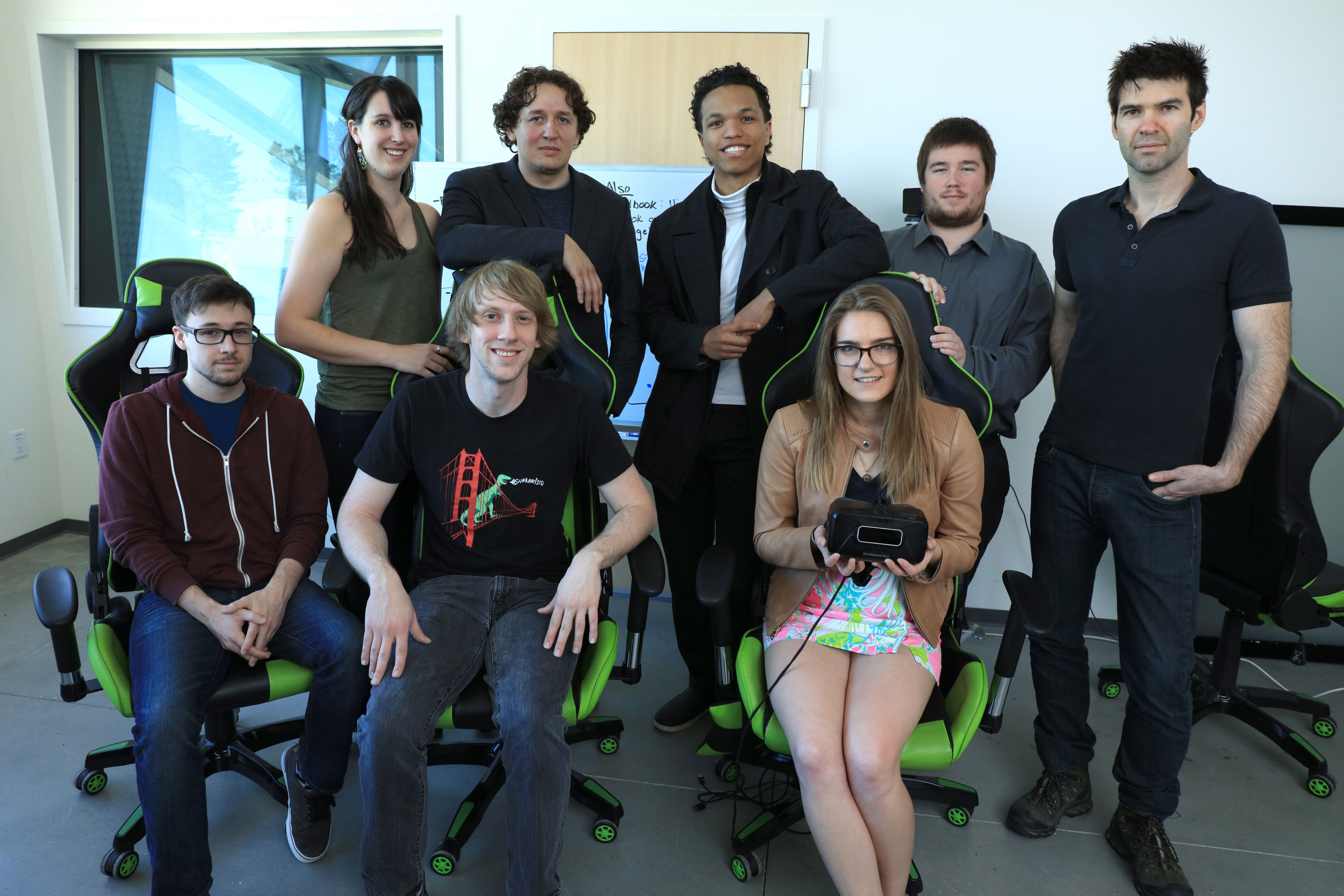 Architecture is tied into the Capstone project of Brian Geiger, a computer science major and regular at the Game Research Lab. Geiger created a virtual reality “tour” of the Gambord Business and Information Technology Building. Put on a pair of VR goggles and you’re walking around the interior of the Gambord Building, examining the classrooms and overall floorplan. It’s an almost surreal experience – and an ideal tool for architects and real estate developers.

Applications also go beyond the physical structure of a building itself. One of Eckhardt’s projects focuses on simulating sunlight in interior spaces. If you want to know, before building a house or building, what the lighting will look like in any particular room, put in the time-of-year and time-of-day. The sunlight for that moment and location comes through the windows of the digital interior, which is represented on the computer screen. Other applications focus on “virtual landscaping,” allowing developers to see what types of vegetation look like around the exterior.

The possibilities are numerous. The lab is still new and is supported by the Undergraduate Research and Opportunities Center (UROC), Cryteck’s VR First Initiative, Faceware Technologies, the School of Computing and Design and Pietroszek himself.

“Many people don’t realize the power of these new technologies – and how it can improve the quality of life,” Pietroszek said. “We are hoping to change that.”