Athletics and kinesiology treat injuries that are not always physical 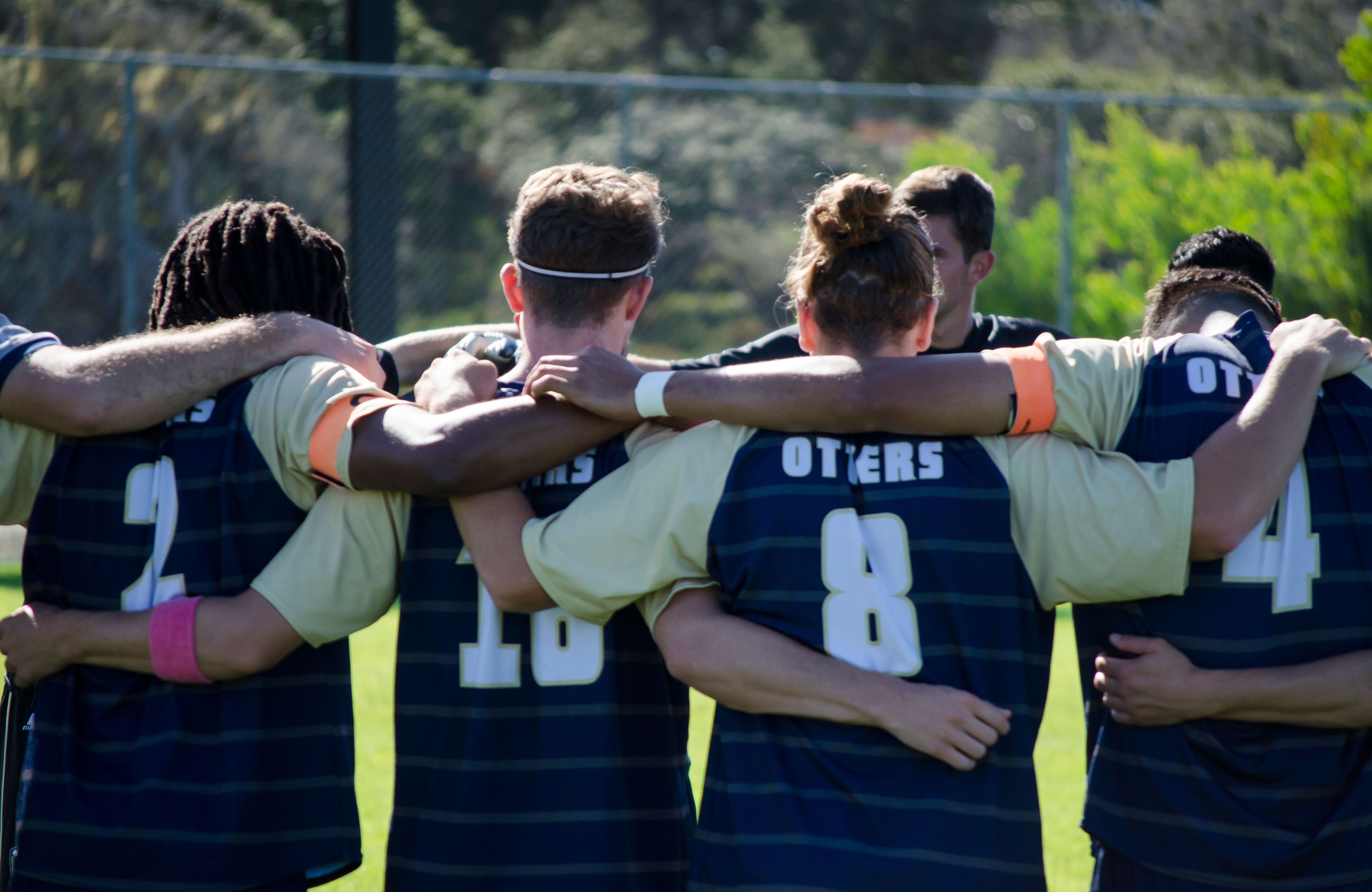 The CSUMB Men’s Soccer team gets ready for a game.

When most fans think about how stress affects athletes, they focus on the big moment – the game-tying free throw, the decisive penalty kick, the downhill five-foot putt to take the lead.

But what about the sprained ankle, the jammed shoulder, the blown-out knee? Are those affected by stress as well?

“The research indicates that the best psychological predictor for physical injury is stress,” said Joanna Morrissey, an assistant professor in kinesiology at Cal State Monterey Bay. She said that stress activates the flight-or-fight response, which leads to increased muscular tension, loss of peripheral vision and slower information processing, all of which can make an athlete more prone to injury.

So CSUMB is building on the existing relationship between the Athletic Department and the Kinesiology Department, which have joined forces on the physical training of student-athletes, to explore the mental aspects of the games more fully as well.

CSUMB Athletic Director Kirby Garry appeared on a panel discussing athletes’ health issues at the 2017 NCAA convention in Nashville. “We have limited resources to deal with this,” Garry said. “But we are really fortunate to have faculty members who have gone above and beyond.”

While Division I athletic programs have plenty of budget and personnel to explore all aspects of their sports, a Division II program like CSUMB needs to be more creative. Fortunately, the university has a thriving kinesiology program, whose faculty members and athletic training staff study and teach the science of sport and human performance.

“I haven’t been any place where people are so willing to work together, with so much respect for professional strengths that each person has,” Paddack said.

“We all have the same goal, making it a great experience for the students.”
— Mike Paddack

Morrissey, who specializes in sport and exercise psychology, began working with athletes who suffered season-ending injuries. She helped them handle logistics – mobility issues around campus, residence hall accessibility and the like – as well as offering them an opportunity to work through their feelings about being sidelined.

“We did that for about a year, and the overwhelming response from the students was that it was helpful,” Paddack said.

This academic year, Morrissey’s role expanded. If stress is a major predictor for injury, she reasoned, perhaps lowering stress levels could lower injury rates as well.

Morrissey worked with athletics to come up with a baseline test for athletes to determine the levels of stress they feel in their everyday lives.

To combat the problem of concussions in recent years, athletes have been given tests to determine their baseline level of cognitive functioning. If they suffer a concussion, their activity is restricted until they get back to their baseline level. Now, the NCAA urges similar testing for mental health issues.

The baseline test indicated that about one-in-five student-athletes thought they needed help with stress and anxiety issues, similar to the findings for the entire student body.

Paddack said the test did not show any real difference in stress levels by sport. “Regardless of what sport it is, they are invested in it 100 percent, so outside factors that get in the way of that are going to cause a problem.”

The results of the baseline test allowed Morrissey to meet with student-athletes who requested help as the school year was getting under way. That alleviated some of the demand on the CSUMB Personal Growth and Counseling Center, which provides services for the entire student body.

She said that if student-athletes come to her with a clinical diagnosis of anxiety, depression or an eating disorder, she refers them to a specialist. Usually, however, the issue is less severe.

“Sometimes there are issues about performance in their sport – they might be in a slump or their team is losing games,” Morrissey said. “But more often, it is regular student issues – time management, goal-setting, and relationship issues – that are the problem.”

According to Morrissey, she has met with a number of student-athletes who have stopped by her office a few times to talk. She has several athletes she meets with on a regular basis.

It is too early to tell whether this program had any impact on the number of injuries among Otter athletes. But Paddack said there is some positive anecdotal evidence. And both the academic and athletic sides of the relationship seem eager to see where it leads.

“We are just building this as we go along,” Morrissey said, as they learn about the needs of their student-athletes.

Below is a NCAA video from May 2017 that features Morrissey and Paddack.