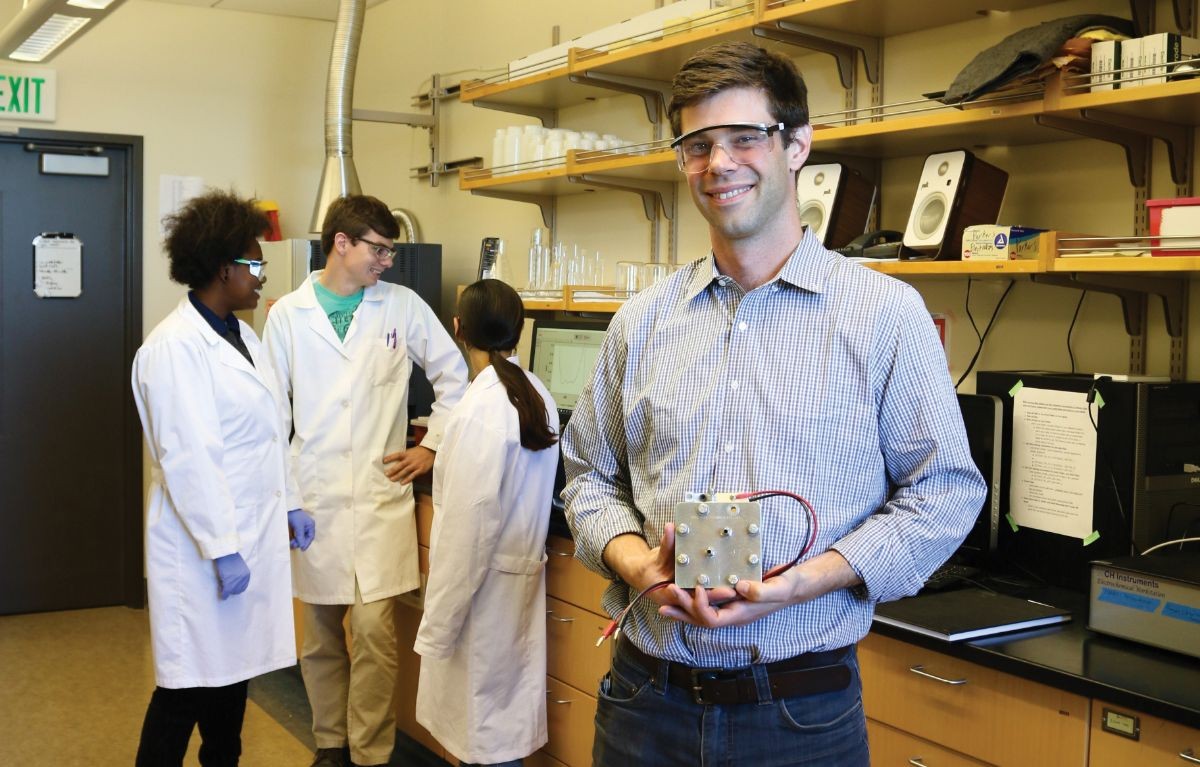 Photo by: Joan Iguban Galiguis
Assistant Professor John Goeltz and students in his lab at CSUMB's School of Natural Sciences.

Over the past four years, assistant professor John Goeltz has built the Laboratory for Applied Electrochemistry at CSUMB with a plan for long-term sustainability and with two main goals in mind: to create “whole” scientists and increase traditionally under-represented populations in science, technology, engineering and math (STEM) fields.

Along the way, while taking full advantage of every possible resource available, the list of accomplishments from his lab has also continued to grow.

Goeltz was hired as an assistant professor at CSUMB’s School of Natural Sciences in 2015. By 2016, California State University (CSU) awarded him a faculty incentive grant to support the applied electrochemistry research in his lab. His research aims to enable faster battery-charging capabilities and overcharge protection and led to a non-provisional patent application for a hydroxide selective electrode in 2017.

After a few hours with our hands-on training module, undergraduate students emerge ready to converse with potential graduate advisors and employers and prepared to dive into research in fields ranging from batteries to neuroscience.
— John Goeltz

In addition to their research success, the team developed a three-hour, hands-on training module for undergraduate scientists that takes participants beyond the scope of electrochemistry taught in general chemistry. The module was first offered by Goeltz and CSUMB undergraduate Parker Smith during the summer of 2017, and trained eight Research Experience for Undergraduate (REU) students who were conducting summer research at CSUMB. The training program was so successful that Sonoma State University’s Department of Chemistry requested Goeltz and his team offer it to their department during the spring of 2018.

“Electrochemistry is an excellent research domain for an undergraduate institution as the equipment is generally cost-effective, it is highly interdisciplinary, and training can be rapid,” said Goeltz. “After a few hours with our hands-on training module, undergraduate students emerge ready to converse with potential graduate advisors and employers and prepared to dive into research in fields ranging from batteries to neuroscience.”

Goeltz has now mentored more than 20 CSUMB undergraduate researchers and recently secured funding from the National Science Foundation (NSF) for $245,000 over three years, that will ensure his lab continues to expand well into the future.

The NSF grant, spanning from Sept. 1, 2018, until Aug. 31, 2021, will support up to three students at a time in Goeltz’s lab. It will cover costs for chemicals and supplies associated with the research, and pay for travel costs for each student to present their research findings at a national conference each year.

“Our proposed research aims to enable enhanced charging speeds, potentially doubling the accessible charging rates at high states of charge, and accelerating sustainable transportation through adoption of electric vehicles,” said Goeltz. “Perhaps more importantly, our work to make the liquid part of sealed batteries an active participant that would enable intrinsically safe batteries that can’t be overcharged, with reduced risk for overheating or catching on fire.” 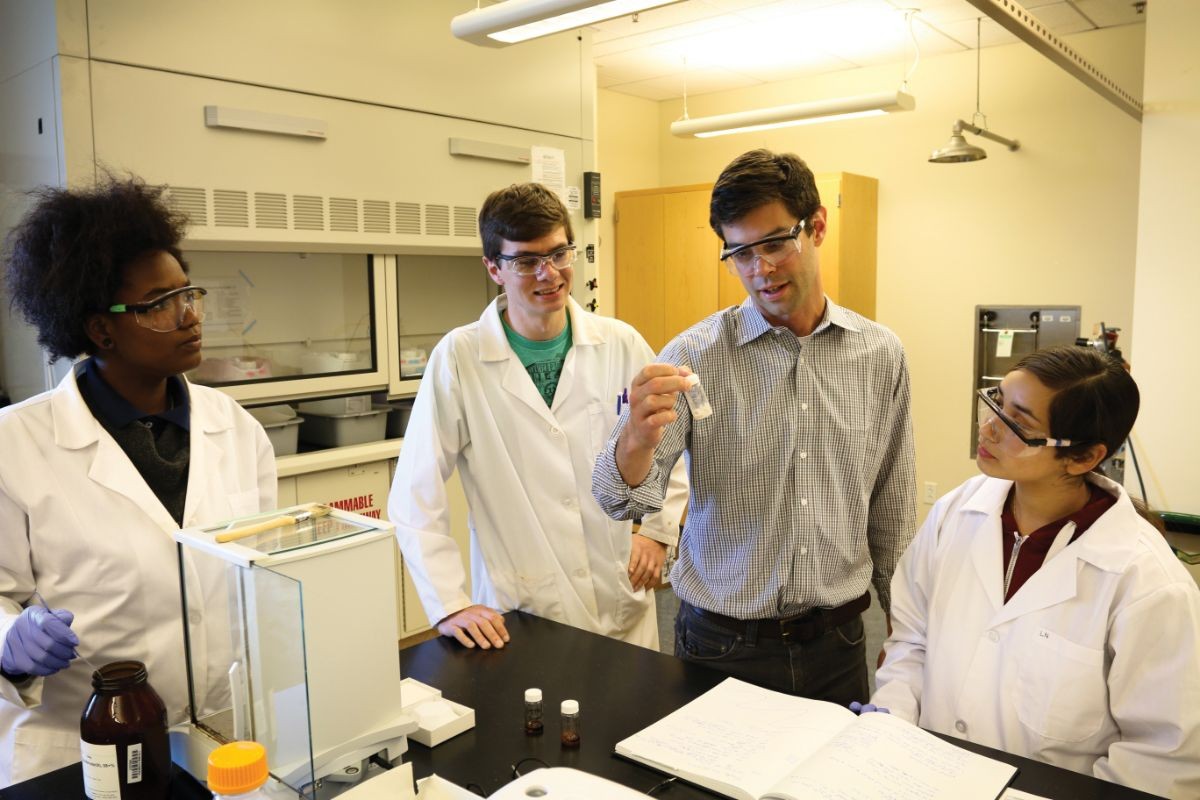 Photo by: Joan Iguban Galiguis
John Goeltz and students in the lab.

Along with the growth of his lab, Goeltz has encountered some challenges and increased needs for support that he understands he cannot fill alone. Collaborative and resourceful, he has turned to others for help. He contacted Natasha Oehlman, writing and professional communication associate at CSUMB’s Undergraduate Research Opportunity Center (UROC), for assistance.

“Training young scientists to practice communicating their work effectively is a critical piece of broadening the STEM pipeline with respect to under-represented groups and first-generation college students,” he said.

To increase participation of under-represented groups in chemistry, Goeltz asked the university’s Office of Inclusive Excellence for strategies in inclusive mentoring and recruiting.

“Of the 20 undergraduates I have mentored up to this point, 60 percent have been female and 50 percent have been from traditionally under-represented groups, and both of those numbers are a strong representation of CSUMB’s overall population,” Goeltz said. “It is essential that I facilitate training of whole scientists in a way that is inclusive to all backgrounds.”

Goeltz has established his lab, and CSUMB, as a pipeline for talented undergraduate scientists to pursue competitive graduate programs and STEM careers in the physical sciences. His leadership and contributions toward preparing students for future success are an embodiment of CSUMB’s vision to serve all the diverse people of California.

“The opportunity to train a diverse group of talented young scientists in electrochemistry while working towards improved energy technologies has been, to be frank, a whole lot of fun,” Goeltz said.

“Every morning, I come in to work thinking I’ve found new challenges to spur my undergraduate researchers to grow as scientists and as people, but every evening I go home thinking that’s what they’ve given me.”