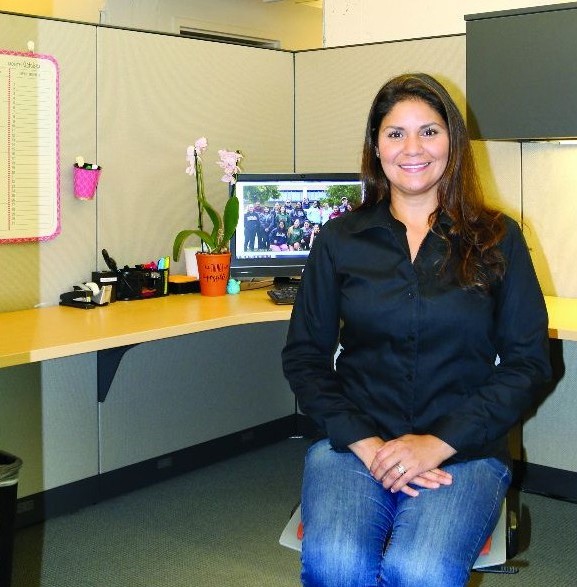 If you want to understand Theresa Dexter, two quotes from her should help.

"I think the person who has to do something about this is me.” And “Don’t tell me what I can’t do.”

Dexter is a senior health and human services major from Sacramento who works with TRIO student support services. A product of the foster care system, Dexter has been active with the Guardian Scholars program, which supports former foster youth on campus.

“I am at a Guardian Scholar event, and I was a little frustrated,” Dexter said. “We have this check-in when people tell their stories, and I was thinking, I am living within a budget, and I can’t afford to go buy new underclothes. I am mending my bras, and I am pretty irritated. And I thought there should be more resources for foster youth, because a lot of us don’t have families who support us.

Only about three percent of the 415,000 youth in foster care in the United States ever obtain a college degree, in part because of the lack of such basic support. So Dexter set off to find resources to help.

After talking with people who have started similar programs on other campuses, and talking with a wide range of administrators at CSUMB, she decided to put together a packet of student stories and take it to local retailers.

Providing that extra support and ensuring equal opportunity to all former foster youth at CSUMB.

“I went out and started passing out these folders that had people’s stories in them and said, ‘Hey look, this is what is going on. And it is not like we are asking for a lot; we are asking for basic necessities,’” Dexter said. “I got turned down a lot, but that didn’t stop me.”

Eventually, Target and Ross Dress for Less signed on with the project, allowing Dexter to put together “Mending the Needs” bags. And the CSUMB bookstore sold her sweatshirts at half price and approved an account so that the Guardian Scholars can purchase CSUMB attire at a discount throughout the academic year.

Just as important, Dexter said she has put things in place so each year’s Guardian Scholars will receive similar care packages.

Dexter herself took a non-traditional path to college, working for Safeway for 20 years before her husband’s college graduation inspired her to go back to school. Now she is hoping to pursue her master’s of social work degree after graduation.

Don’t tell her that she can’t do it.