From state-of-the-art buildings, to transformative scholarships, to game-changing stadium lights, these donors helped make it possible. Vice President of University Advancement Barbara Zappas wrote to donors in 2017: “Your generosity provides a lifelong memorable college experience for our students who move into the world with the skills and values to make them successful.” 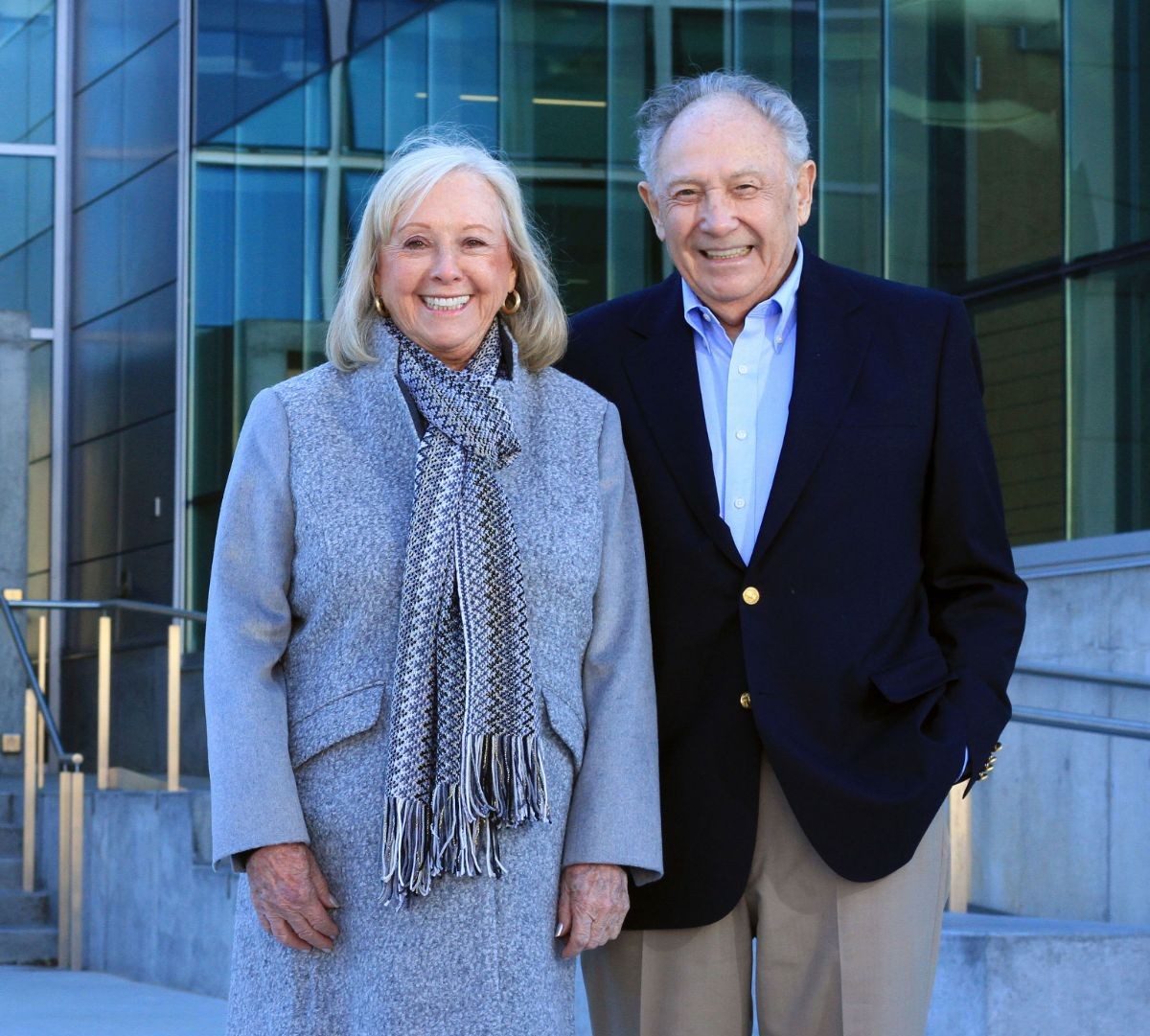 They came from humble beginnings, yet Joel and Dena Gambord became inspiring philanthropists. The Gambords gave $10 million to CSUMB in March 2015, the largest donation the university has received to date.

“We have been blessed by the good fortune during our lifetime to have the resources to create an opportunity to assist others in our community," the Gambords said.

In recognition of their generous gift, the university named its new academic building at the time — the $43 million home of the College of Business and the School of Computing and Design — the Joel and Dena Gambord Business and Information Technology (BIT) Building.

Both Gambords are no strangers to the Monterey Bay area. Dena’s father, a carpenter, helped build Fort Ord. Her mother worked in sardine canneries in Monterey.

During the Korean War, Joel was drafted and sent to Fort Ord for boot camp. After the war, he started a small business as a contractor and built a real estate development empire in Silicon Valley.

“There are much larger universities to which we could contribute, but our gift would get lost in the shuffle,” Joel said. “At CSUMB, we know whatever we do there, we will have an impact.”

From the start, Bob and Sue Antle were among CSUMB’s staunchest supporters. Dedicated philanthropists, they gave of their time, talent and treasure to the university

“I remember (Bob) coming up to me and saying it was the best thing to happen: to establish this campus, and to give young people here, who might never have the chance, the opportunity to get a good education and to improve their lives,” Secretary of Defense Leon Panetta recalled about Bob at a memorial service in 2014.

The Antles met at Watsonville High School and were married for 58 years. At a young age, Bob took over the produce company started by his father, Bud Antle. He became a leader in the industry and co-founded produce giant Tanimura & Antle.

Bob served as vice chairman of the Panetta Institute and president of the CSUMB President’s Council for many years. CSUMB awarded him an honorary doctorate in 2007. Sue helped found and support CSUMB’s “Have a Heart for Students” scholarship fundraiser for 20 years.

Upon Sue’s death in March 2018, CSUMB President Eduardo M. Ochoa praised her decades of fundraising work: “(She) helped open the door of opportunity for many first-generation students and transformed lives.”

If you’ve cheered for the Otters at a nighttime sporting event or enjoyed the glow of the new stadium lights shining in the distance, thank the Monterey Peninsula Foundation. A $1.5 million grant, one of the foundation’s largest gifts ever, enabled CSUMB to install 16 stadium lights and host night games for the first time.

“It’s going to make a huge impact on our ability to market and promote our programs, and invite the community out to our campus to see what we believe is really great NCAA Division II competition,” Athletic Director Kirby Garry told the Monterey Herald in January 2019, as the project neared completion.

The foundation began in 1937 as a small charity golf event hosted by Bing Crosby and became the famed AT&T Pebble Beach Pro-Am. It has since distributed $135 million to hundreds of non-profits in Monterey County. CSUMB has received more than $8.4 million from the foundation, a donor for more than 20 consecutive years.

Led by patriarchs George Tanimura and Bob Antle, two longtime Salinas Valley farming families joined forces in 1982 to form the industry-leading farming company Tanimura & Antle. The company is committed to funding education programs in the community, and nowhere is that more visible than at CSUMB.

In honor of the company and its founders, the university named its centerpiece building the Tanimura & Antle Family Memorial Library. The company gave the largest private donation of $4 million for the library’s construction.

Ahead of its dedication in December 2008, the Monterey County Weekly described the $64 million library as “architectural performance art” with “a transcendent edifice of soaring glass and sculpted concrete.”

The biggest building on campus at 136,000 square feet, the library serves as the social and academic hub of the university, and an enduring testament to Tanimura & Antle’s support.

In fall 2003, CSUMB opened the Patricia and Robert Chapman Science Academic Center, the university’s first new building. The state-of-the-art facility was named for the Chapmans, who gave $2.5 million toward construction of the $24.5 million building and were among the university’s earliest supporters.

“From my first day here, I have been impressed with the quality of the university leadership and faculty, the accomplishments of the students, and the strong teamwork ethic at CSUMB,” Patricia said.

When Robert died in August 2016, perhaps Navy veteran and science student John Freutel said it best: “Thank you for the great science building where I'm learning so much. Students here are learning to use science to improve the lot of all life on Earth,” Freutel wrote in a condolence message. “All the good things that come about because of our training come from your generosity and investment in our future.”

In celebration of our 25th anniversary, CSUMB is recognizing a company, a foundation and 23 individuals and couples for helping to make the university what it is today. This story is Part 5 of 6 in "25 for the First 25: Honoring Our Past." Go to "Alumni" to read Part 6.