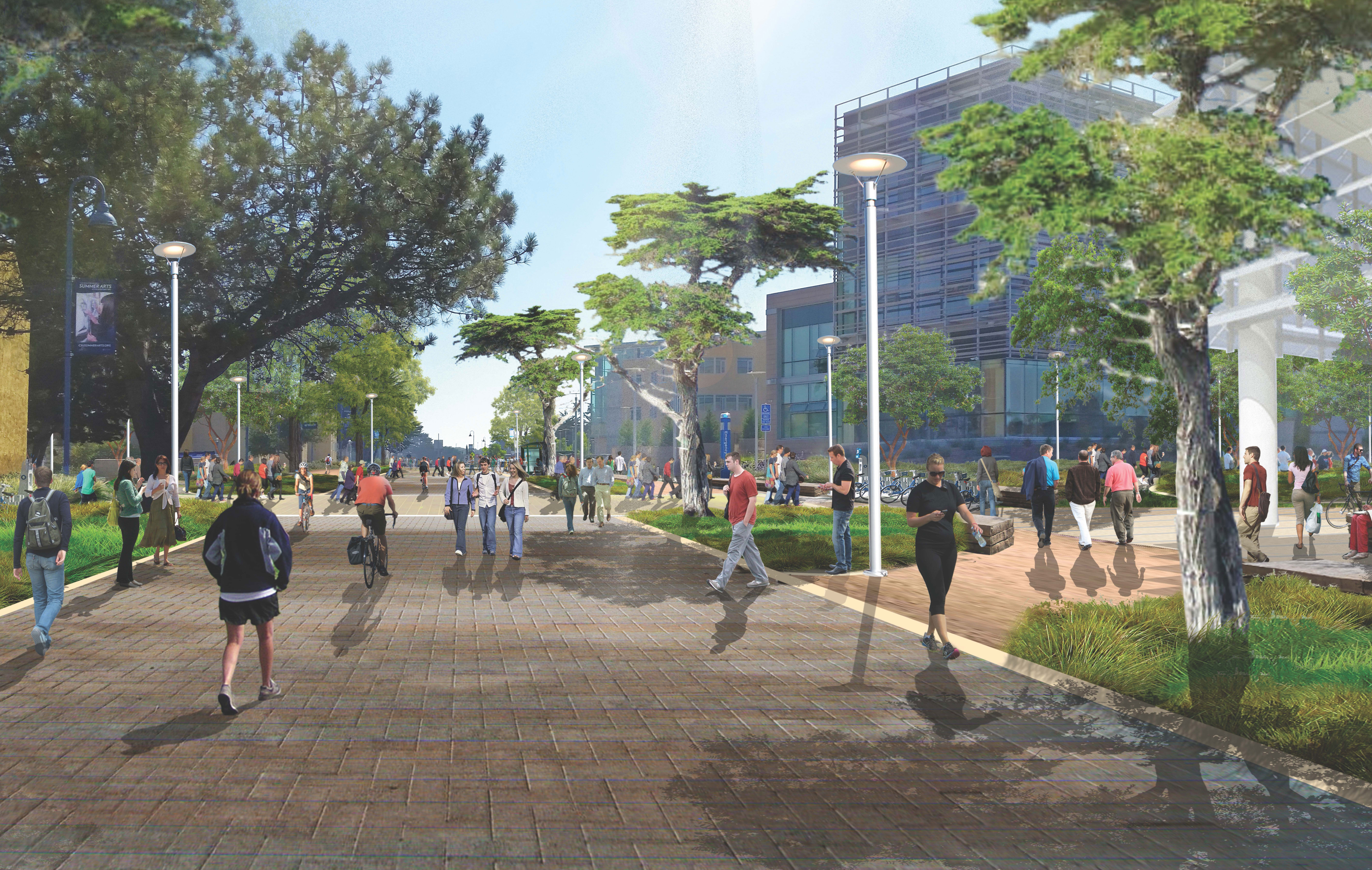 A vision of Divarty Street mall.

Since 1994, Cal State Monterey Bay has transformed an historic military training facility into an academic community that is shaping the culture and economy of the Monterey Bay region. And things are just getting started.

The university, which recently celebrated its 20th anniversary, serves more than 7,000 students. The 2017 master plan update looks to a campus of up to 12,700 students. The plan also sets aside land for growth to a 25,000-student campus, which was originally envisioned in the Fort Ord Base Reuse Plan.

CSUMB previously updated its master plan in 1998 and 2007. The 2017 update identifies best practices in sustainability and transportation, protects the natural environment, increases public and car-free areas, and determines locations of future classrooms, offices, and research spaces. 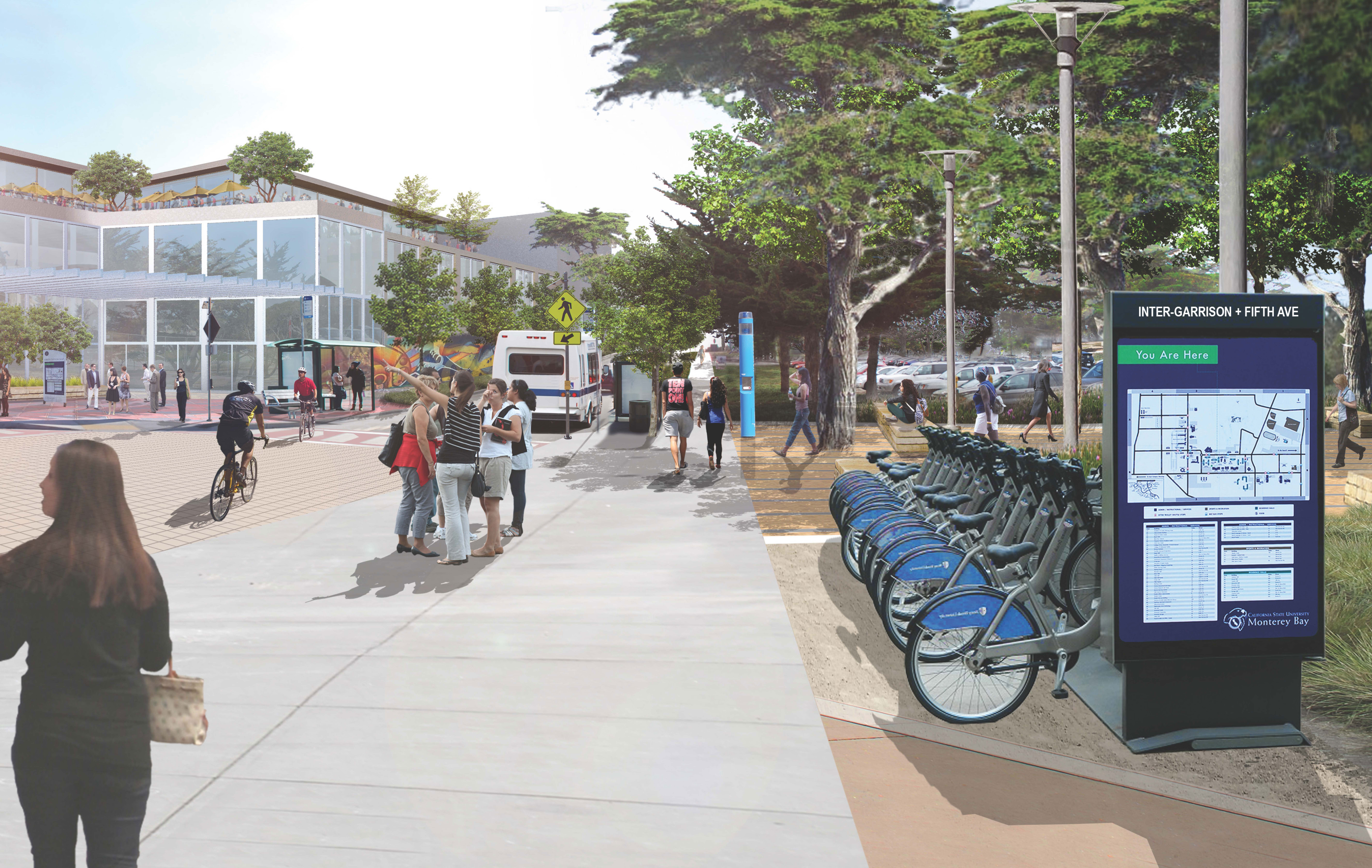 A vision of Inter-Garrison Road.

Academic III will house the College of Arts, Humanities, and Social Sciences. The building will be more than 50,000 square feet, and will include classrooms and department and faculty offices. It will have indoor and outdoor community and gallery spaces, and be designed to meet the U.S. Green Building Council’s Leadership in Energy and Environmental Design (LEED) Gold standards.

The Student Union will be approximately 70,000 square feet. It will feature meeting rooms, a ballroom, lounges, food service space, a bookstore, retail space, as well as student government, housing, and administrative offices. It will be designed to LEED Silver standards.

Another project in the early planning stages is the Student Recreation building, to be located near Divarty Street and Engineer Lane, adjacent to the proposed Academic III. The 24,000 square-foot facility will include indoor and outdoor multi-use courts; weight, cardio, and fitness rooms; lockers and restrooms and administrative office spaces. It will be built in phases. Like Academic III, the building will be designed to LEED Gold standards.

With new buildings lining Divarty Street, the concept of the Divarty Street Pedestrian Mall, originally proposed in the 2007 Master Plan, will come to life. The concept of a road for pedestrians and cyclists, and closed to through traffic, is one of the core concepts of the plan (see illustration above).

In the past, the primary purpose of master plans was to site buildings and plan basic systems, such as transportation, water, and energy.

According to Lacey Raak, director of sustainability at CSUMB, the 2017 master plan update will take this concept one step further, striving to create community and to site and design buildings and systems that are ingrained with the natural environment. The CSUMB sustainability committee is working closely with this process.

Raak said two sustainability frameworks are being considered, both of which take the concept of building-scale sustainability and expand it campus-wide.

“Addressing the operational and infrastructure elements of sustainability is just one piece of the puzzle. It is also crucial to acknowledge the relationship that people have with physical structures and the natural environment,” Raak said. 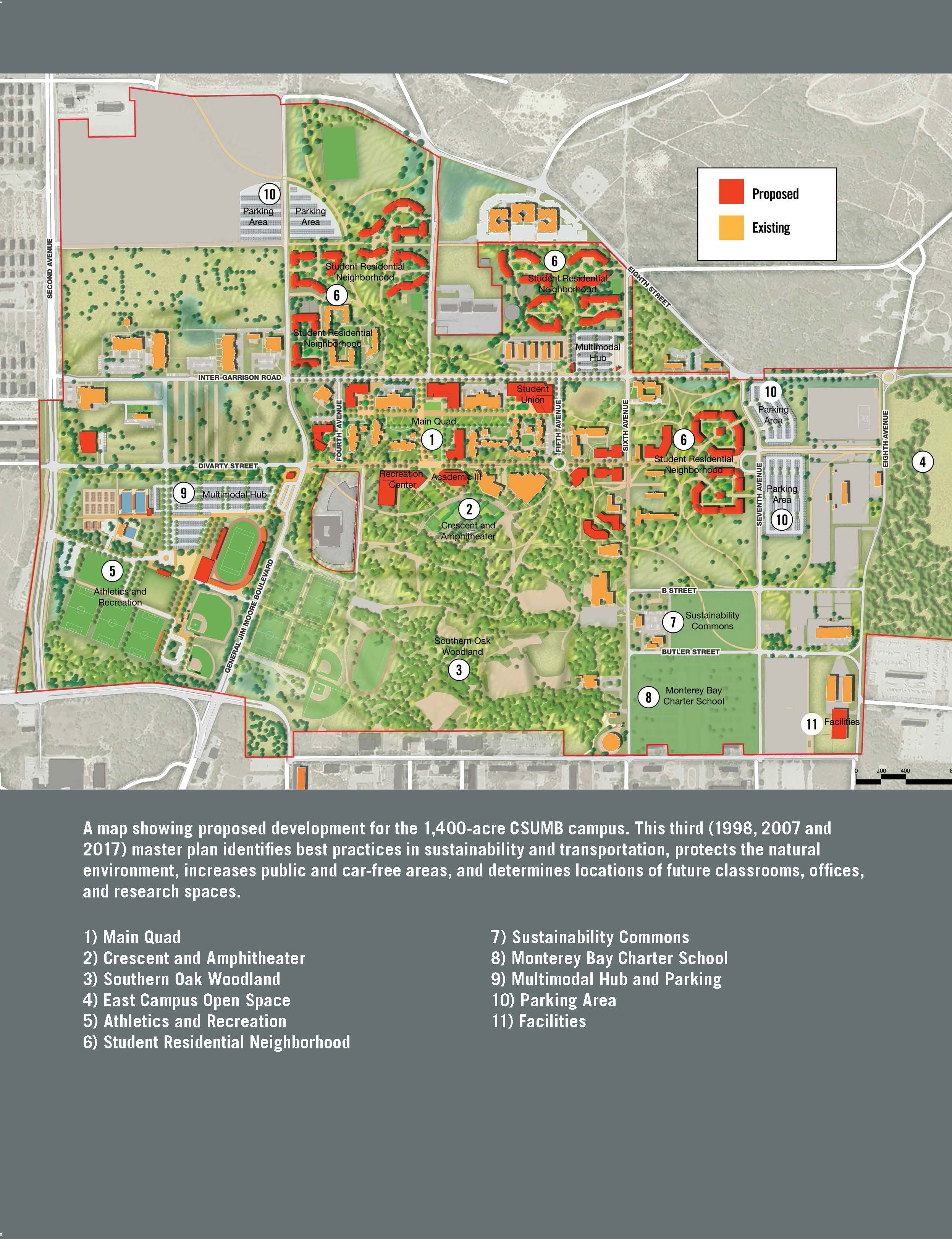 Land use and transportation

CSUMB campus planners must take into account a settlement agreement that requires the university to mitigate offsite traffic impacts. This agreement would require CSUMB to spend millions of dollars to improve roadways around campus if annual vehicle counts exceed a certain threshold.

“I’d rather see our money spent creating an accessible bike and pedestrian network across campus and providing safe pathways for people to walk, talk, and share ideas, than spending millions to widen or signalize off-campus intersections,” Spear said. “I know people want cheap parking close to their buildings, but that comes at a cost.”

The new plan proposes expanded bike and pedestrian pathways to connect all parts of campus. The proposed Fort Ord Rec Trail and Greenway, designed by two CSUMB faculty members, is a 30-mile regional network of paved trails and greenways connecting communities to open space. It was incorporated into the plan and now runs through campus.

President Eduardo Ochoa supports an ambitious transportation scenario presented by the master plan consultants. This scenario is similar to UC Davis, where 30 percent of people drive alone, 20 percent share rides and the other 50 percent bike, walk or use transit.

In addition, CSUMB is embracing the stewardship of water resources.

“CSUMB is putting itself in a position to be able to treat and reuse its own water in the longer term,” Kathleen Ventimiglia, director of campus planning and development, said. “Decreasing reliance on potable water for irrigation or flushing toilets is important to prevent over drafting our aquifers and supports our role as good stewards.” 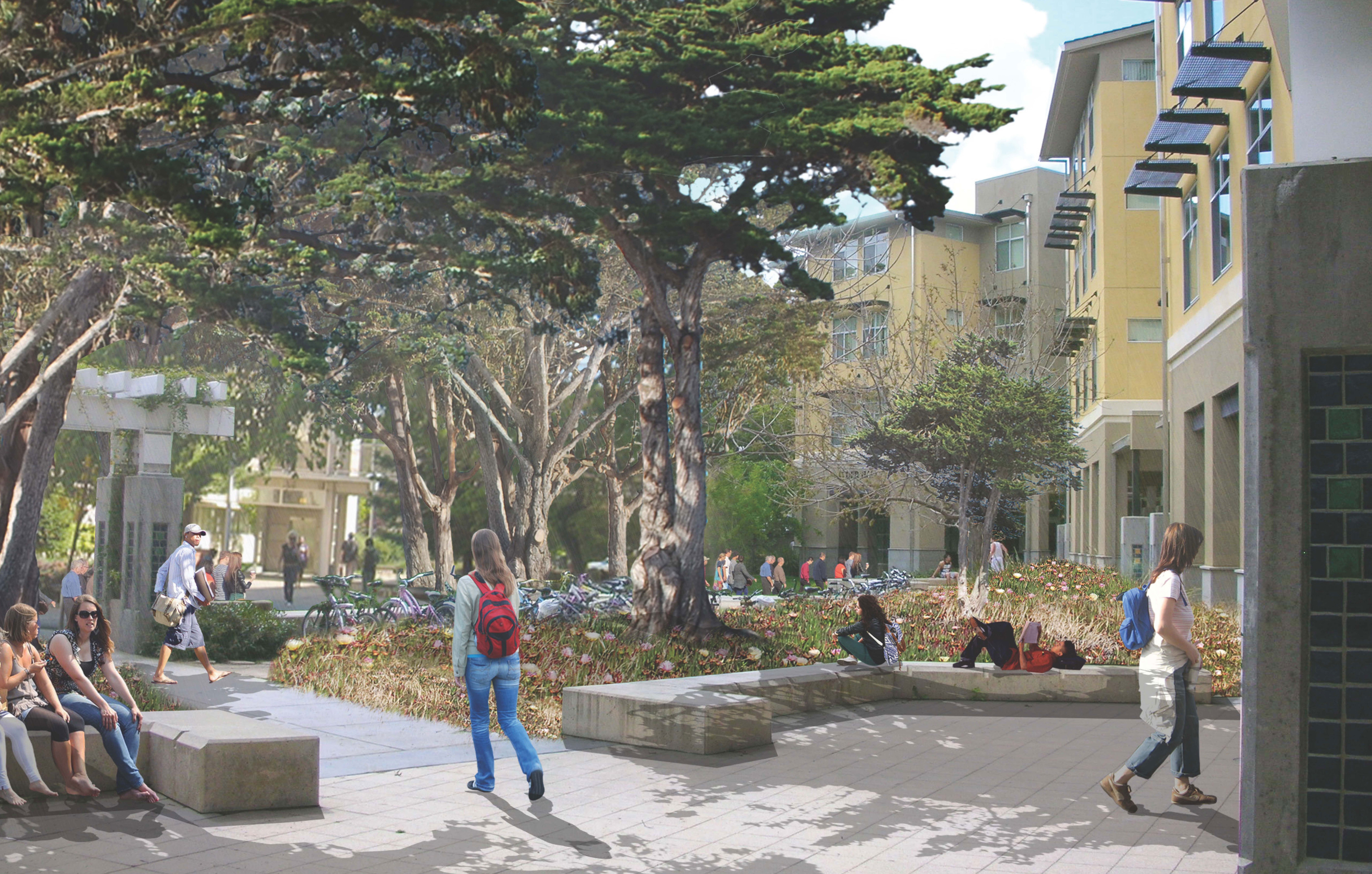 The surrounding community has a vested interest in the growth of CSUMB, and for good reason. The university is a driving force in the Monterey Peninsula economy (see sidebar). Unlike many universities, CSUMB has ample land to grow, but does face water and traffic limits.

Ventimiglia said that if CSUMB grows to 12,700 students, the university will need to house at least 60 percent, or 7,620 students. The university now houses about 3,100 students, 45 percent of the current population.

Kevin Saunders, vice president of administration and finance at CSUMB and executive director of the University Corporation, helps develop private and community partnerships for CSUMB.

A recent example is the Promontory, a student housing facility built on an eight-acre site at Eighth Street between Fifth and Sixth Avenues. The Promontory, which houses 600 to 700 students, is a short walk to the main campus and is connected by a bike and pedestrian pathway to Inter-Garrison Road.

The facility was built through a partnership with a private developer and the city of Marina. Earlier this year, the University Corporation purchased the Promontory from the developer, using revenue bonds. The bond payments are now lower than the corporation’s lease payments to the developer.

“Student housing was desperately needed – and the CSU capital project process would have taken too long and been too expensive,” said Saunders.

In addition, the CSU Board of Trustees recently approved the relocation of the K-8 Monterey Bay Charter School from both Pacific Grove and Seaside locations to campus. The school will be located on 18 acres between Sixth and Seventh Avenues and north of Colonel Durham Road.

Also included in the 2007 Master Plan, but just now moving forward, is the construction of a new building for the Panetta Institute for Public Policy. The building is in early planning stages and will likely be located off Second Avenue.

“We anticipate this process with private entities and community partners will be essential for future growth and economic development in the Monterey Bay region,” Saunders said.