Ready for the World

Photo by: Provided
CSUMB alumna Merlyn Calderon Schultz represented the United States as a Cultural Affairs Officer in Yaoundé, Cameroon. She has also served abroad in Mexico and Costa Rica.

As a girl living in the farming communities of Salinas and Castroville, Merlyn Calderon Schultz (B.A., Global Studies, 2001) never imagined she would become a national labor union leader or a foreign diplomat for the United States. Cal State Monterey Bay changed the trajectory of Schultz’s life and started her on a journey to experiences and places far from her California home.

"CSUMB prepares you for the world. Literally, I’m proof of that,” Schultz said. “Traveling around the world, I’m working alongside colleagues who are your Yale graduates, your Harvard graduates, and you know what? I’m performing well, I’m able to compete and move forward foreign policy. And I got my education at CSUMB, and I’m very proud of that.”

Schultz is the youngest of six children born to Mexican-immigrant, farmworker parents. Her father was a tractor driver in lettuce fields, and her mother labored for 23 years in an artichoke cannery.

CSUMB prepares you for the world. Literally, I’m proof of that."
— Merlyn Calderon Schultz

“I don’t think we really realized we were poor. We always had amazing food, my mother and father always provided for the family. But the truth is, we were poor,” Schultz said.

The family lived in the “tougher neighborhoods” surrounded by gang violence, she said. Friends were shot and killed when she was in middle school. Her older siblings all had children of their own by the time they were 16, and none went to college.

Schultz began exploring a different path, thanks to a teacher and a CSUMB advisor. An English teacher at North Monterey County High encouraged the talkative and argumentative teen to use her traits in a positive way. Schultz became active in student government and developed an interest in international politics. An advisor with Educational Talent Search at CSUMB, a federally-funded program of the U.S. Department of Education, began encouraging Schultz to pursue higher education. 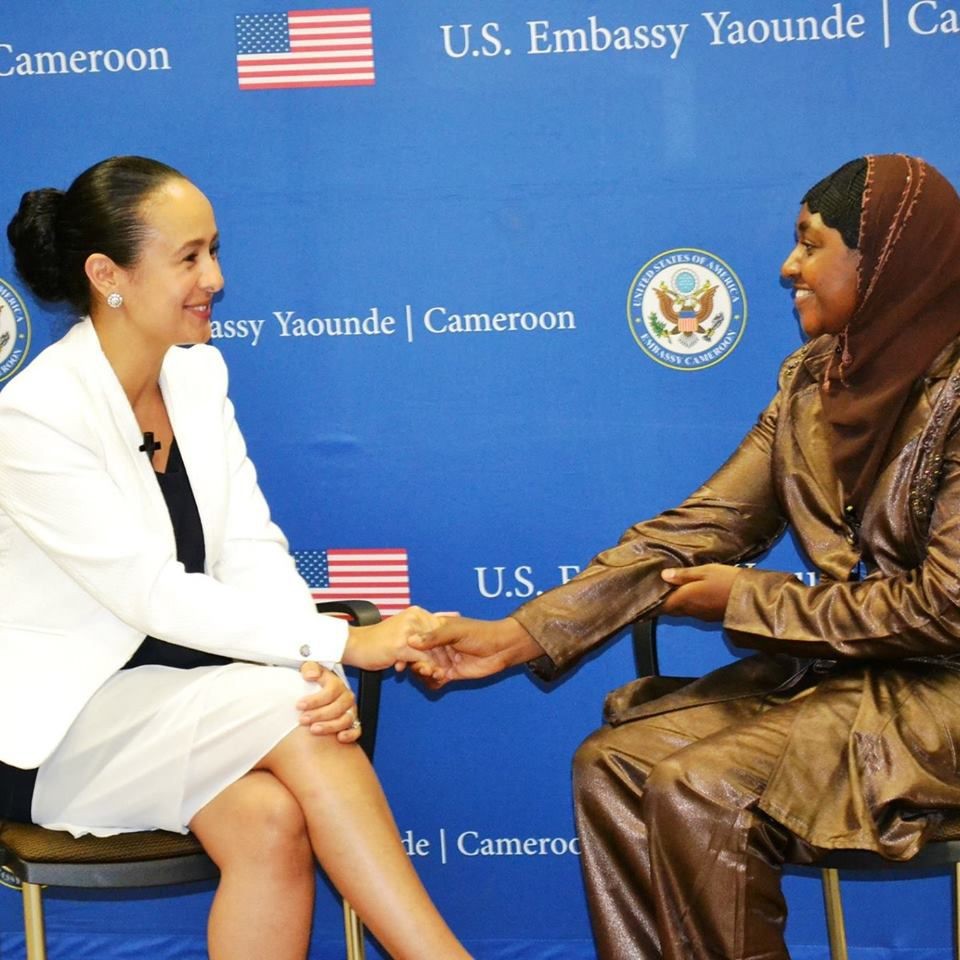 Photo by: Provided
Schultz at work in Cameroon

“She would come to North County, pull me out of class, and talk to me about the steps it takes to go to college. I found out about all the rich opportunities I could have if I kept going into higher education, … and I found out about CSUMB,” Schultz said.

“It was a huge advantage that (CSUMB) was in my backyard, which allowed me to go to school and keep a connection to my community.” Schultz became the first person in her family to go to college and earn an undergraduate degree. She continued on to graduate school, obtaining a master’s in public administration from the University of Southern California. At CSUMB, she was named Outstanding Senior for her community service work with Natividad Medical Center in Salinas, the Monterey County AIDS Project and Mothers of Chualar.

The latter is a community group that grew from a CSUMB class which tackled environmental policy. The students organized and educated mothers in the nearby farming community of Chualar about the health dangers in their drinking water caused by agricultural runoff, pesticides and septic systems. The group succeeded in convincing Monterey County officials to dig a new well to provide a source of clean water.

“My education (at CSUMB) was super hands on. When I was there, I remember 30 students would be a big class, and we had the very best professors that were traveling from the Ivy Leagues to come teach us. And we were paying a CSUMB price for them, which was awesome! We were going out into communities and using in the field what we were learning in the class.”

After graduation from CSUMB, the California Department of Consumer Affairs awarded Schultz a fellowship in Sacramento. She later went to work in the State Legislature for then Assembly Appropriations Chair Judy Chu, as a senior legislative assistant focusing on public health policy issues.

Drawn to help farming families like her own, Schultz became California political director in 2007 for the United Farm Workers (UFW) of America, the country’s largest farm workers union. She quickly rose in prominence and was elected UFW’s national vice president in 2008.

I’m very proud of the work we did in Cameroon, in helping women and children. They were the greatest victims of that terrorism and violence."
— Merlyn Calderon Schultz

Her father had died years before, but her mother was present for the momentous occasion. “She was over the moon!” Schultz said. “My mom really saw the benefit of the union and having union representation. She was super, super proud.”

Her foremost accomplishment with UFW was establishing stronger regulations requiring shade, water and extra breaks to protect farm workers from heat stroke, Schultz said. She then turned to the world stage, beginning her foreign service career with the U.S. State Department in 2011. She has since served in Mexico, Cameroon and Costa Rica. Her responsibilities have included providing aid to refugees in Cameroon escaping Boko Haram terrorists.

“I’m very proud of the work we did in Cameroon, in helping women and children,” Schultz said. “They were the greatest victims of that terrorism and violence.” Last spring Schultz returned to the United States to accept a role with the State Department’s Operations Center in Washington, D.C.

“We handle crises around the world, keep State Department leaders abreast of current news, and facilitate communication for the secretary of state with foreign leaders,” Schultz said. No matter where her life and career take her, Schultz said she will always feel a special closeness and connection to Cal State Monterey Bay.

“Those are my roots, that’s where I started. Nothing was possible until I started there,” Schultz said. “I feel so tremendously thankful for my CSUMB education and proud to be an Otter!”