Published in the Fall/Winter 2015 CSUMB Magazine, prior to Moroh's retirement.

A CSUMB founder continues her journey

Riding the Monterey Bay Coastal Rec Trail, with the Pacific’s majestic blue expanse at her side, Marsha Moroh is enjoying another commute to her office. The dean of CSUMB’s College of Science bikes often on this path, an eight-mile trek from Monterey to campus that provides stunning coastal views and plenty of time to think and reflect. There’s plenty to remember – Moroh was one of the founding faculty at CSUMB more than 20 years ago. She is retiring this year.

Some paths are more challenging than others. Moroh is a trailblazer. After becoming the first woman ever to earn a Ph.D. in computer science at the Polytechnic Institute of New York, and after serving for 25 years as a professor in the City University of New York (CUNY) system, Moroh and her family came west to help found this California State University campus. Ferry rides past the Statue of Liberty, her daily commute in New York, were replaced by the serenity and rustic military history of the decommissioned Fort Ord. Moroh was thrilled.

“The CUNY system was horribly bureaucratic. I was intrigued by the idea of starting a university from scratch and applying best practices,” she said.

What really pulled her in was the vision of CSUMB – people teaching and learning from one another in mutual respect; a residential family community in a university; the concept of service learning. It seemed almost utopian, according to Moroh.

Then reality hit. The workload was stunning for CSUMB’s 13 founding faculty members during the first year. There were no courses, no labs or equipment, and little infrastructure. Moroh and her colleagues would work all day and at night, and read resumes to hire additional faculty. They reached out to the community on a regular basis to meet people. Yet, the campus ethos was being a creative hub with little restriction. Faculty came up with innovative curriculum. They were audacious and thinking big. “We felt like we were really building something,” Moroh recalls fondly. 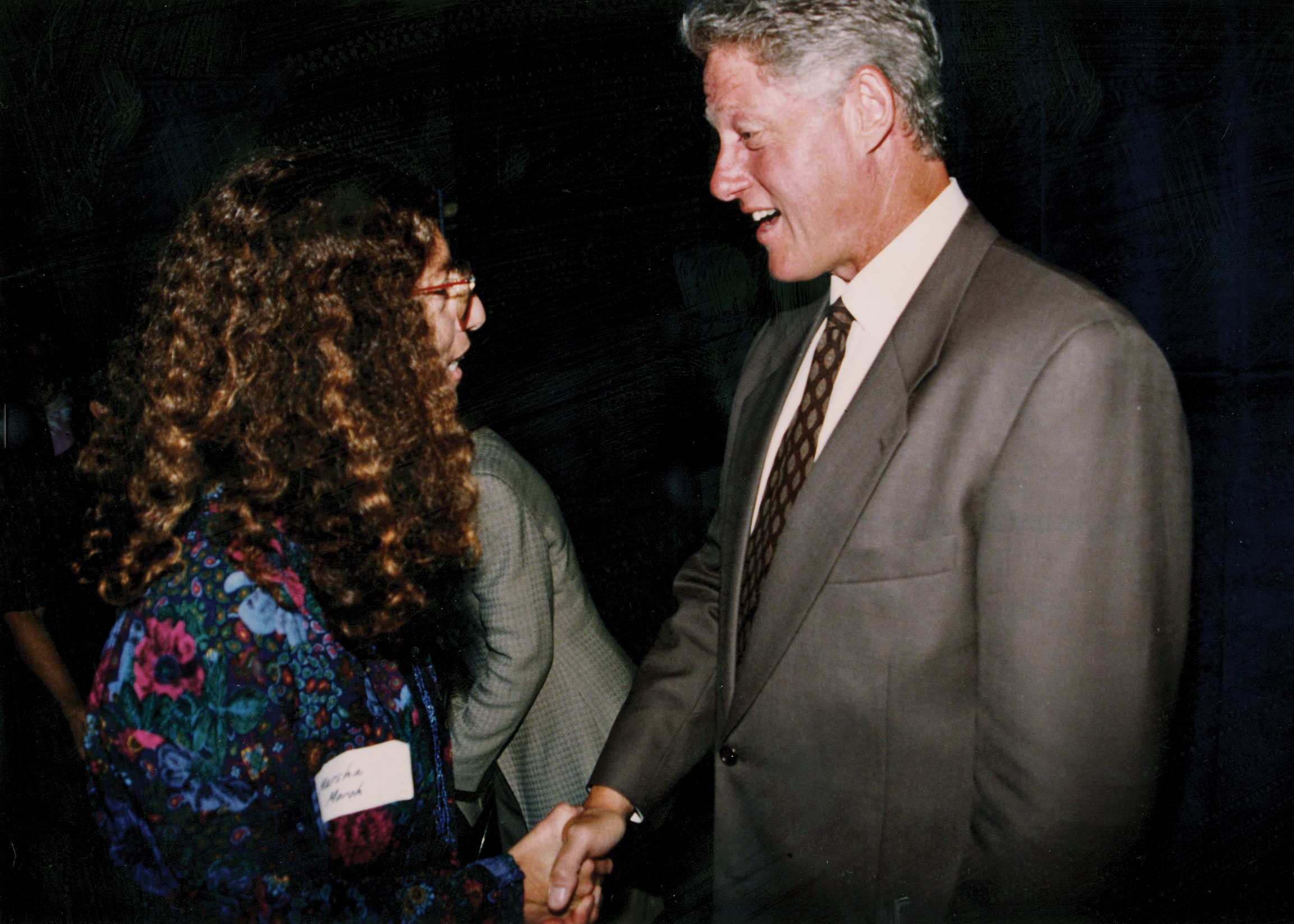 Marsha Moroh and President Bill Clinton at the CSUMB dedication ceremony in 1995.

Along with assisting in the founding, Moroh was hired at CSUMB to teach computer science. On the first day of class during that first year, there was only one problem – the computers were still in their boxes.Thus Moroh’s first teaching assignment to her computer science students: unpack the computers and set them up.

Experiences like these made a tightly-knit campus community. But things began to change. A major step was the opening of the three-story, 68,000 square-foot Chapman Science Academic Center in fall 2003. The first new building on the CSUMB campus, the center has 13 science labs, five designated for capstone and student-faculty research projects. Until then, the science department utilized a former Fort Ord blood bank for lab space.

Moroh oversaw the design and construction of the Chapman Building but gives the real credit to Science and Environmental Policy Professor Bill Head, who recently retired. “If it wasn’t for Bill, we probably wouldn’t have a science building,” said Moroh. “He developed a strategic plan for the College of Science and wrote grants to fund the Undergraduate Research Opportunities Center (UROC), one of the best undergraduate research support programs in the country.”

Moroh hired virtually every faculty member at the College of Science. She credits those faculty for its growth and success. “My greatest accomplishment is the faculty that I hired.”

Much of the research equipment at the College of Science, including the boats and diving equipment, were purchased through grants written by the faculty said Moroh. Last year, close to 200 students were paid researchers from faculty grants, doing cutting-edge research, and often publishing their work with faculty. In the CSUMB student population itself, approximately a third of the students are STEM (Science, Technology, Engineering and Math) majors. 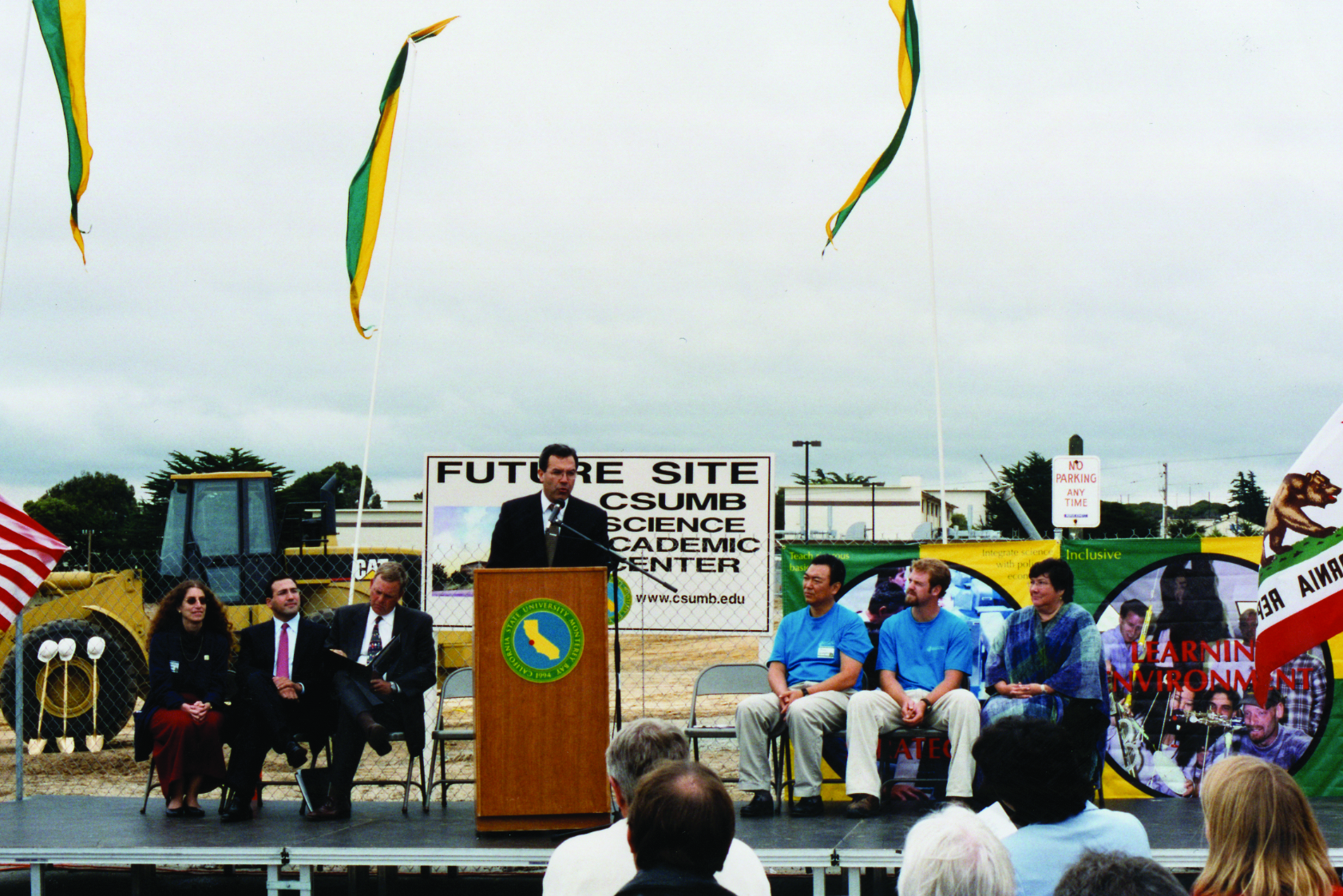 Marsha Moroh (at far left) at the groundbreaking ceremony for the Chapman Science Academic Center in 2001.

The success of the CSUMB College of Science is a fitting tribute to Moroh’s outstanding academic career – a career that spans both sides of the country and almost a half-century. For the last 20 years, Moroh has been a visionary, innovator and scholar at CSUMB. The College of Science is strong, and will continue to innovate and expand research opportunities due to her leadership.

What’s next after retirement? Her husband, Ken, is a retired CSUMB computer science faculty member. They plan to travel to Italy together, and she will spend more time with their two grown daughters and Moroh’s mother, who is 96 years old. A skilled pianist, Moroh will have more time to indulge in her passion for music. Gardening is also on the agenda, as is volunteer work, and probably occasional consulting (she has extensive international education experience, in settings as diverse as Dubai and Pakistan).

Whatever path Moroh takes from CSUMB, perhaps you could say it’s going to be smooth, probably with a great view. Maybe you could say the wind will be at her back. Regardless, she’s not leaving CSUMB completely behind. She was a mentor and friend to many in the CSUMB community and always will be.

“I’m certainly going to be a part of CSUMB in some way, contributing where I can. And I’m sure I will take a few OLLI classes and keep learning,” she said. “Life-long learning: that’s what CSUMB is all about.”