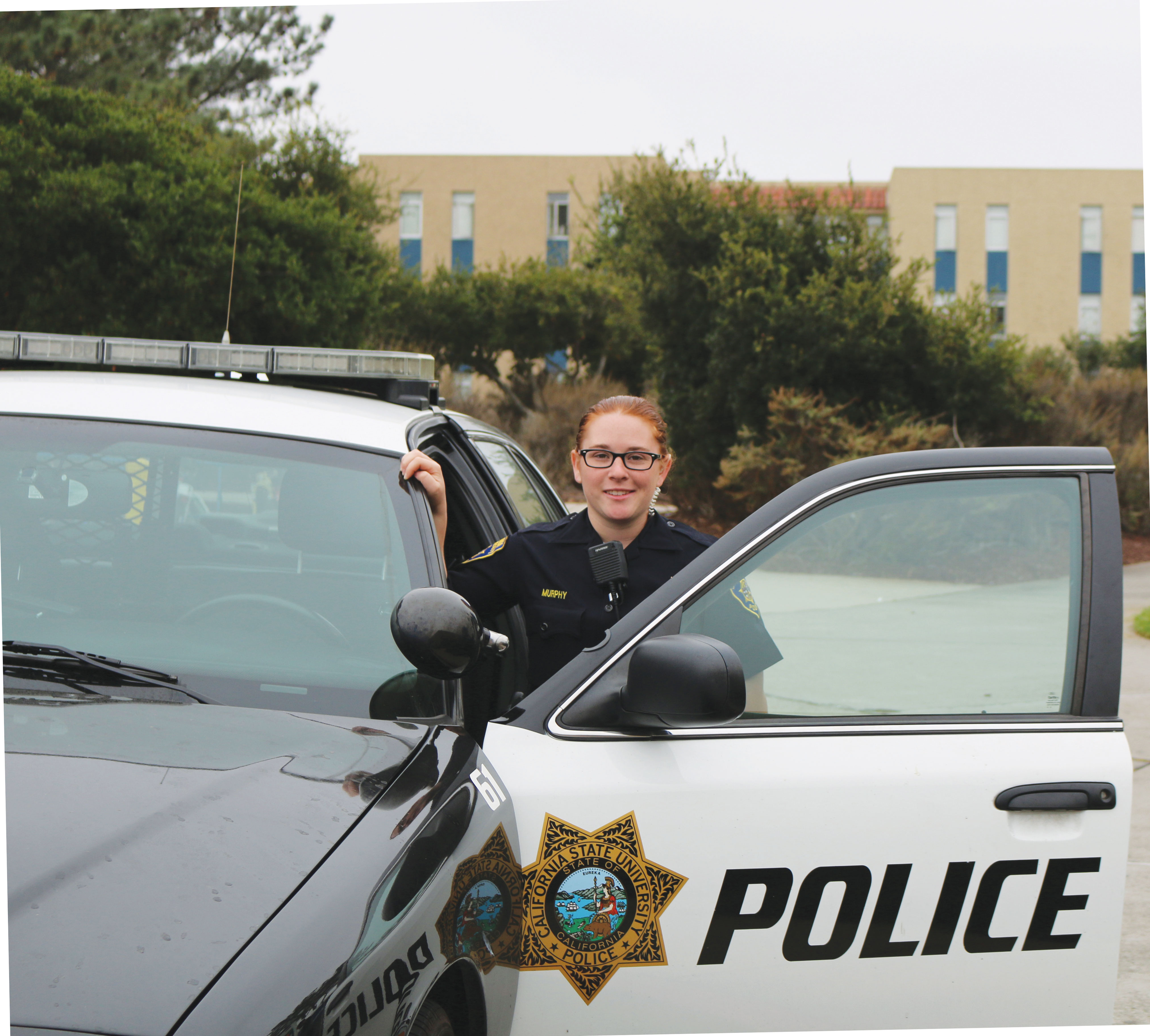 A CSUMB police cruiser drives west on the darkened campus, a spotlight occasionally streaming out from the vehicle’s side and scanning the shrubbery along the road. It drives past the main quad area, where groups of students are milling around, and heads to a parking spot popular with those headed to the beach. It is an unseasonably warm night, perfect for a walk.

CSUMB Sergeant David Ham slowly pulls up to a cluster of vehicles near the trailhead to the beach. Officer Heather Murphy (SBS ’15) joins him. Both casually examine the vehicles with flashlights and sure enough, one student has left her wallet, keys and ID in plain sight on the front seat. The road is dark and deserted – a prime opportunity for theft.

“It’s not uncommon” said Ham with a smile. “Students sometimes don’t think about the consequences.” Nodding in agreement, Murphy reads the student’s name off the exposed ID, looks up the student’s phone number and attempts to contact her. In the dark, a group of students walk past as Murphy tries calling. They are coming back from the beach. None is the student the officers are trying to locate. Friendly hellos are exchanged.

This example of assistance – and dozens like it in a typical semester – is an excellent example of what makes the CSUMB University Police Department unique, according to Police Chief Earl Lawson.

“Our officers have the power and authority of state police officers – yet consider themselves mentors, counselors and a resource,” Lawson said.

The department serves an area of just under 10 square miles encompassing the 1,400 acre CSUMB campus. Since CSUMB is a residential school, and many students, faculty and staff live on campus, this area is home to more than 7,500 people when school is in session – nearly twice the population of Carmel.

Chief Lawson directs UPD’s extensive operations and is a well-known figure on the CSUMB campus. For nearly 20 years, he has been a part of the university’s police force, becoming chief in 2010. He frequently attends campus events and is often seen talking to students, staff and faculty.

Many officers live in staff and faculty housing, making the campus a place that is truly called home. Others are alums. “Our officer-alums can especially engage well with our students from the shared experiences,” Lawson said. 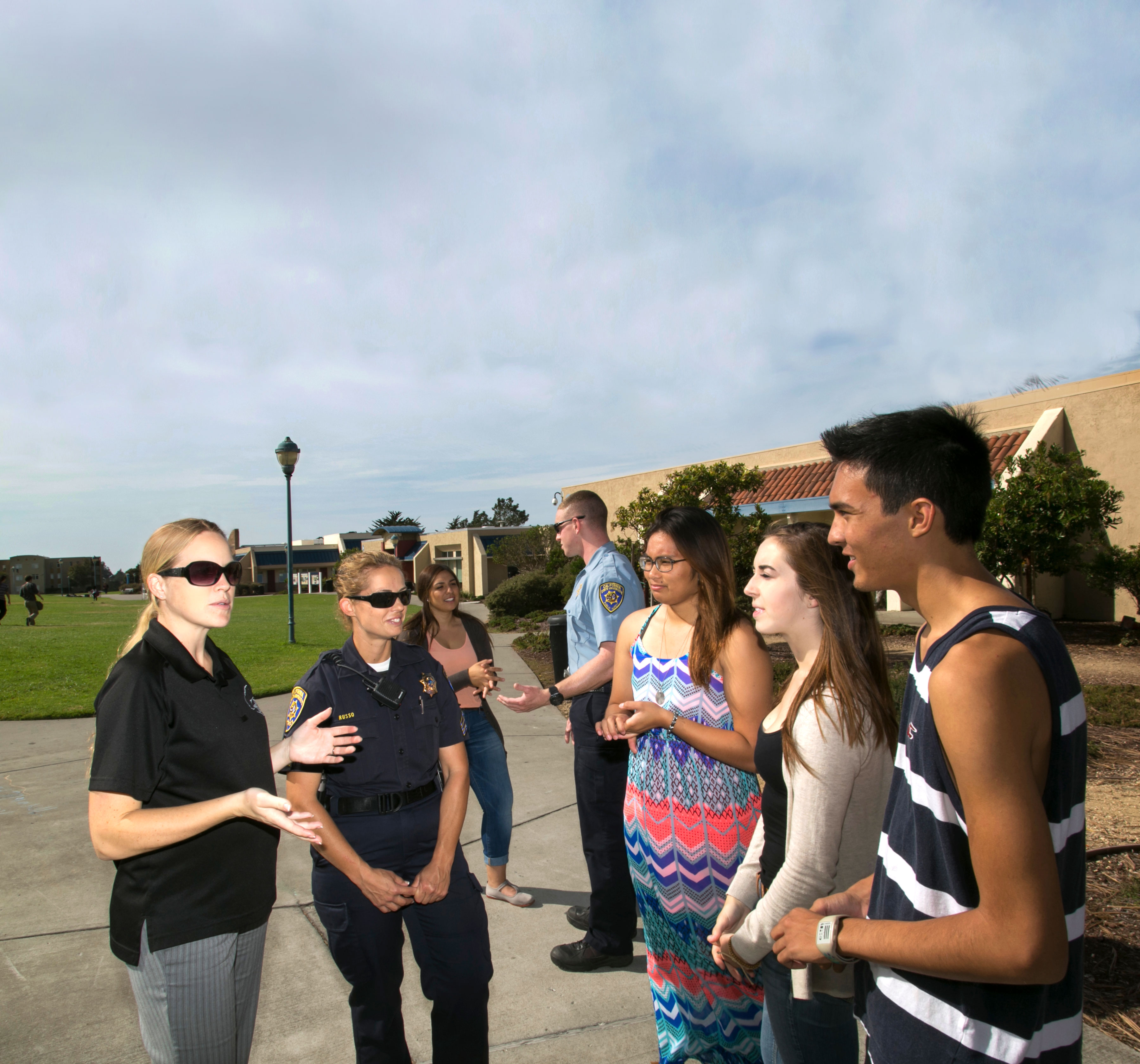 Corporal Carolyn Mcintyre (LS, ’12) was serving as an officer with the Monterey Police Department before coming to CSUMB and completing her education. “I was attracted to the supportive environment. The department is very family-oriented and puts their officers first,” she said. Sergeant Stacie Russo (LS, ’04) agrees and enjoys interacting with students, staff, faculty and visitors. Every day is different. “You feel very connected to the campus community,” Russo said.

This sense of community at CSUMB is one significant factor that drives Lawson’s philosophy – earn respect, build trust, be a resource, keep the lines of communication open, establish a strong visual presence.

Lawson outlines the strong relationship between University Police and the departments that provide counseling to students. “Students come to this campus from all different backgrounds, socio-economic situations and neighborhoods. Many have a very adversarial relationship with the police back home,” he said.“We strive to change that.”

One critical partnership on-campus is with the counseling center. If a student is a non-violent offender, or is having issues with substance abuse causing disciplinary action, the first approach is to help, not prosecute. A “CARE” team, comprised of UPD, staff members from the counseling and health centers, Judicial Affairs, Student Affairs and Residential Life meets weekly to evaluate students with difficulties or in a crisis on a case-by-case basis. Intervention on this level goes hand-in-hand with UPD’s core emphasis on safety. It prevents bad choices by students that result in harm to themselves or their classmates.

Safety is top priority on all levels of operation. Lawson points out the window from his office. “Look at the trees and vegetation. See how they’re trimmed from the ground up? It eliminates hiding places and discourages criminal behavior,” he said. “As a community member, you have a clear line of sight. Safety is a priority in every aspect of the university, it’s even a consideration as to how we landscape.” 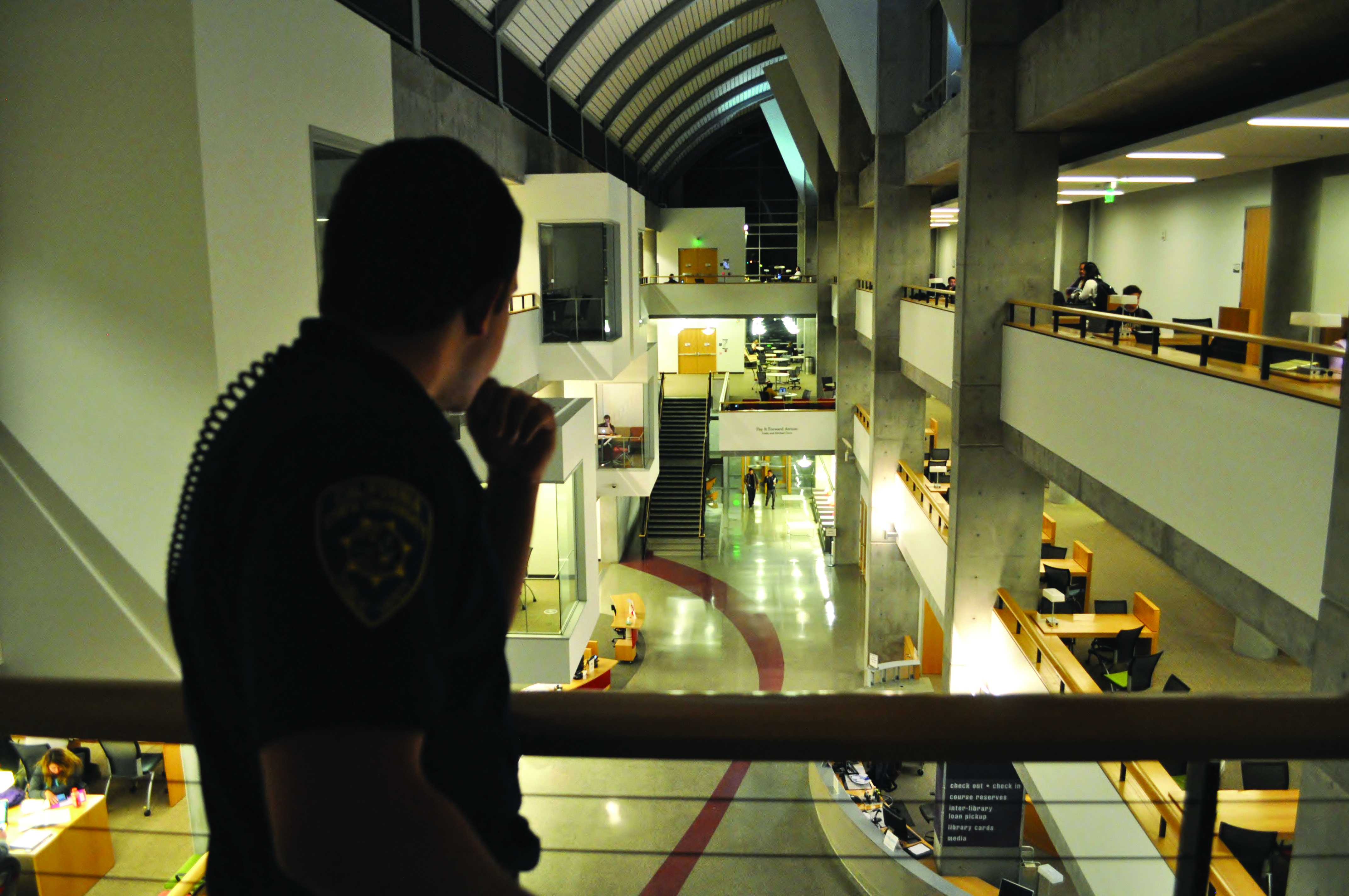 UPD patrolling the library at night (photo by Jarrett McAdams)

That’s just the beginning. UPD is home to a full-time Regional Emergency Operations Center (REOC), which coordinates evacuation and response plans in such incidents as an earthquake or fire. The REOC is managed through a direct partnership with the cities of Seaside and Marina and also serves those communities in event of a disaster.

Another tool is the aptly named “Otter Alert System,” providing UPD the ability to send text notifications and web notifications campus-wide instantly from almost any location. More than 14,000 cell-phone users are subscribed. If the CSUMB website goes down, a “mirror-server” – often located hundreds of miles away at another CSU campus – will take over.

For other worse-case scenarios, UPD is a member of the Monterey Peninsula Special Response Unit, SWAT and Crisis Negotiation Team. Lawson was the team founder and commander before taking the job as chief in 2010. This relationship allows UPD to quickly mobilize officers from surrounding agencies during a crisis response.

“We have robust resources due to inter-agency relationships, allowing us to train together and resource-share,” Lawson said. “We take this very seriously. Student safety is the first priority. It’s our neighborhood. It’s our community. It’s not just a place where we work.”

Sergeant Ham and Officer Murphy agree with this sentiment wholeheartedly. After alerting the student to her exposed ID, the night’s patrol continued. Tickets were written. Doors were knocked on. Music was turned down. And people went home safely.

Ham reflects while driving away from the beach trail in the warm night. Ham is a former Army Ranger, stationed at Fort Ord before starting an extensive career in law enforcement. He came back seven years ago. “The students are what keep you coming back, building those relationships, and seeing them mature and grow. It’s a great feeling.”