Aaron Grice lies bare-chested in his hospital bed eating popcorn. His bed table is covered with plastic utensils, creamer and sugar for coffee, fruit and hot sauce. The table next to his bed holds an assortment of DVDs; Vin Diesel and Dwayne Johnson are his favorite actors. The room is small, but he has it all to himself. The volume on his television is turned up to drown out the rhythmic sound of his oxygen machine.

Grice, 66, is dying. Last year he was diagnosed with thymus cancer. After an unsuccessful attempt at treatment, the cancer has spread to his liver. In February he was told he had less than six months to live and moved hospice care.

When he is not sleeping or watching a movie, he does Sudoku and crossword puzzles to keep his mind occupied. The pain is less when his mind is occupied, he said.

In addition to his physical pain from cancer, Grice grapples with emotional pain. As he nears the end of his life, he reflects on what has led him to this place.

When he dies, he wants to go home to be with his family in the Sacramento area.. His wife and son would like that too. But the reality is Grice will most likely die where he is — prison.

Grice has been in the California prison system since an October 1985 conviction for residential burglary and attempted murder. He has been denied parole three times. 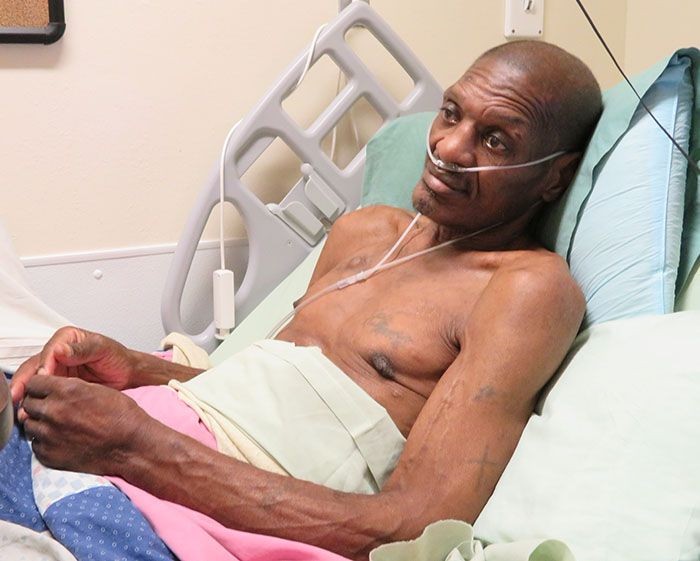 Aaron Grice lies in his bed in the CMF hospice unit.

The hospice unit where Grice receives care is part of the California Medical Facility, a state prison in Vacaville. This 17-bed facility is always full due to the overwhelming demand for end-of-life care for California’s aging prison population.

“The nurses and workers here do what they can to make you comfortable,” said Grice. “It is a tiresome job cleaning people up. Sometimes I get the attitude that I don’t want to trouble anyone.”

This is a common feeling among the dying inmates. The hospice unit offers Pastoral Care Services to help patients and family members during this emotional time.

Reverend Keith Knauf is the chaplain and director of the Pastoral Care Services, and he has been at the facility for 22 years. He works with prison staff, patients, family members and volunteers to ensure the hospice unit is a comfortable and caring space. He also guides patients through reconciliation.

“I like to know why they are here, so I know what they are dealing with,” said Knauf about getting to know new patients. “Some are very remorseful. Some still cling to things. Most will let go at the end and ask for forgiveness.” 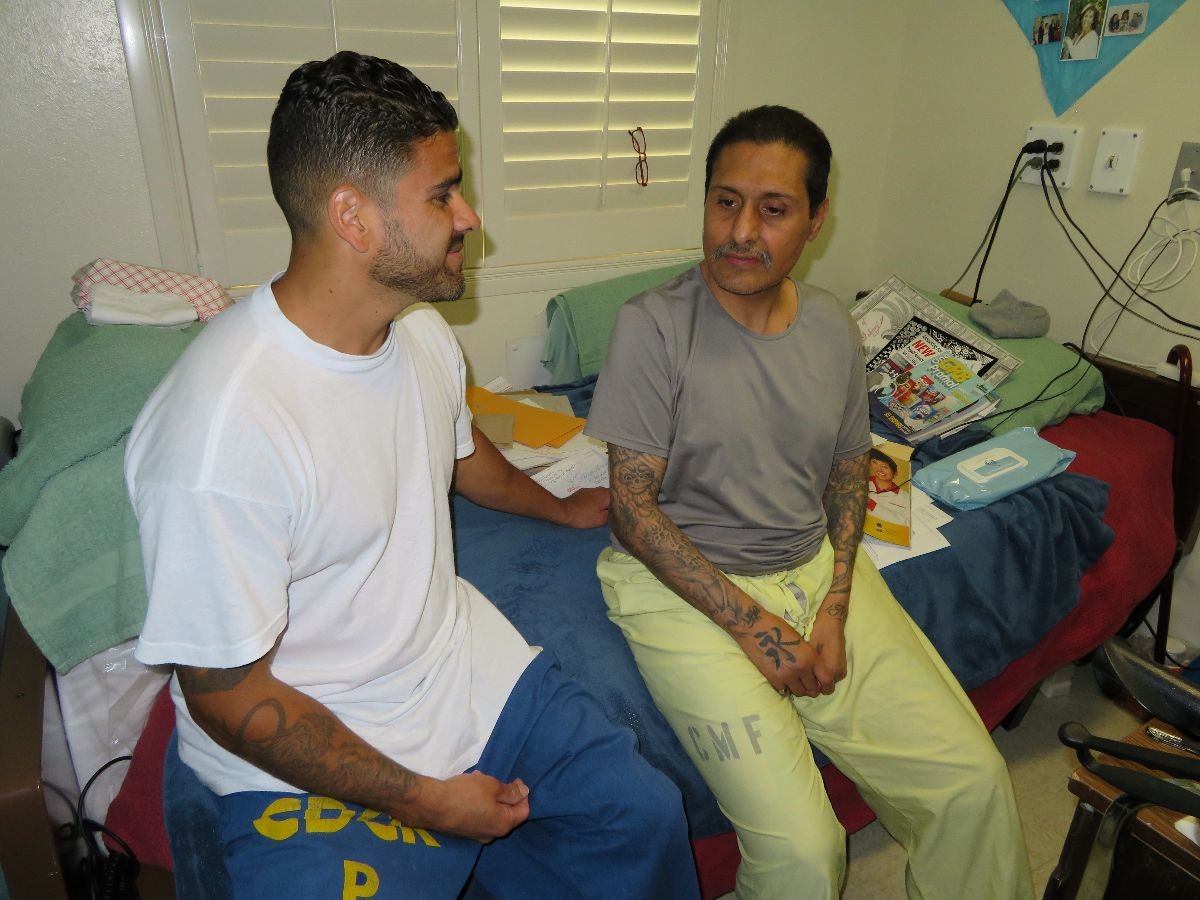 PCS worker Fernando Murillo talks with an inmate patient in the hospice unit.

Knauf also oversees the training and duties for the unit’s Pastoral Care Worker program. These workers are other inmates who provide assistance and companionship to the patients and family members. The inmate workers are screened for prior offenses and receive more than 50 hours of training to be part of the program.

“This gives them a greater appreciation for how it feels to be older,” said Knauf. This is important because many of the younger inmates do not have any respect for the older inmates, which can lead to problems in the general population, according to Knauf.

One of the current Pastoral Care Workers is 37-year-old Fernando Murillo who has been helping out since September 2015.

“It was an accident. I came down for janitorial duty, but then I saw what was happening here. The Chaplain saw something that could be of value in me and here I am,” said Murillo. He was given a life sentence for carjacking and attempted murder in 1996, when he was just 16 years old.

“I was such a calloused individual. I was self-entitled when I committed my crime. I devalued my family and my community,” said Murillo. “Now, I appreciate life in a different way. I have seen a lot — many difficult and wonderful and emotional things.”

The hospice unit averages 70 to 80 inmate patient deaths each year. Some patients die within days of arrival while some after months. It is the patients who have been there awhile and who the workers have gotten to know that make the job both rewarding and challenging, said Murillo.

“I like to know why they are here, so I know what they are dealing with,” said Knauf about getting to know new patients. “Some are very remorseful. Some still cling to things. Most will let go at the end and ask for forgiveness.” 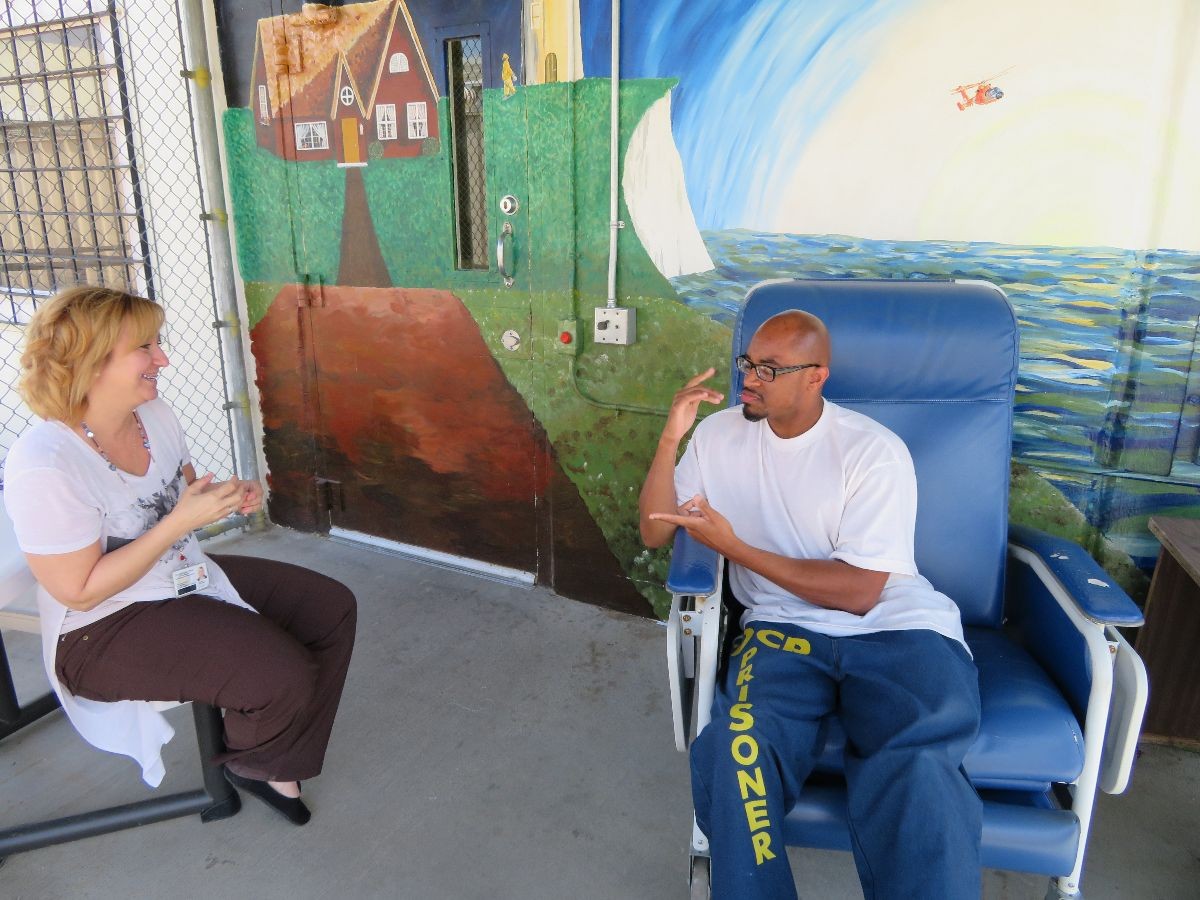 “He was only 20, and I knew him from Sacramento, from the streets. I helped him a lot. When he passed I felt bad because there was nothing I could do. I wish there was a way I could have contacted his family. I am sad because he passed without family by his side,” said Watkins.

Watkins has volunteered in the hospice unit for three years. Now 34 years old, Watkins was sentenced for 12 years to life in 2007 for attempted murder.

Witnessing so many deaths wears on the workers. When he is feeling overwhelmed, Watkins said he likes to go to the yard to workout. He also tries to talk with other workers about what he has experienced. However, both of these activities are particularly challenging for Watkins because he is deaf.

“Communication is key, but sometimes I get frustrated,” said Watkins. “People think because I can talk that I can hear. I read lips but people talk too fast or behind me. I ask people to be patient with me. I try to be more patient with people and to control my emotions and improve my social skills.”

Watkins echoed Murillo’s sentiment about learning the value of life through witnessing death.

“I don’t think of hospice as prison,” said Watkins. He feels the unit offers a place of compassion and acceptance.

There is considerable spiritual care that is given to both inmate patients and workers in the hospice unit.

“These are broken vessels in need of care,” said the Chaplain. “Self forgiveness is hard.”

Knauf said the aspect of reconciliation is a critical part of the care. If an inmate arrives at the unit and has lost contact with his family, Knauf works to find the family and reunite them with the inmate. Only two families in his more than two decades as a prison pastor have not wanted to be involved in the inmate’s life and death.

If an inmate patient is deemed to be in his final 72 hours of life, Knauf and the Pastoral Care Workers start a vigil. This around-the-clock care is meant to ensure that no one dies alone. Visiting hours for family members are broadened and end-of-life spiritual rituals are observed.

All spiritual and religious faiths are honored at the time of death. If family members have made arrangements with Veteran’s Affairs the inmate can receive the U.S. flag and a military funeral.

Going back to Grice, he says he is ready for the end. “I stand on God’s promise, I have always been a Christian,” he said about being at peace with his death.

Part of this has been acknowledging the impact of his crime. “I realize now that the person I shot wasn’t the only victim...the families, my family was also a victim,” said Grice.

His wife and son who live about an hour away have been to visit him once since he has been in hospice. However, Grice does not want them visiting more. He said he doesn’t like to see the hurt on his wife’s face and that she blames herself for his crime.

“It happened because it happened, it wasn’t her fault,” said Grice.

Grice applied in April from Compassionate Release, which would release him from his sentence and allow him to die at home. As of the end of May, no decision has been made on the request; he is still waiting. 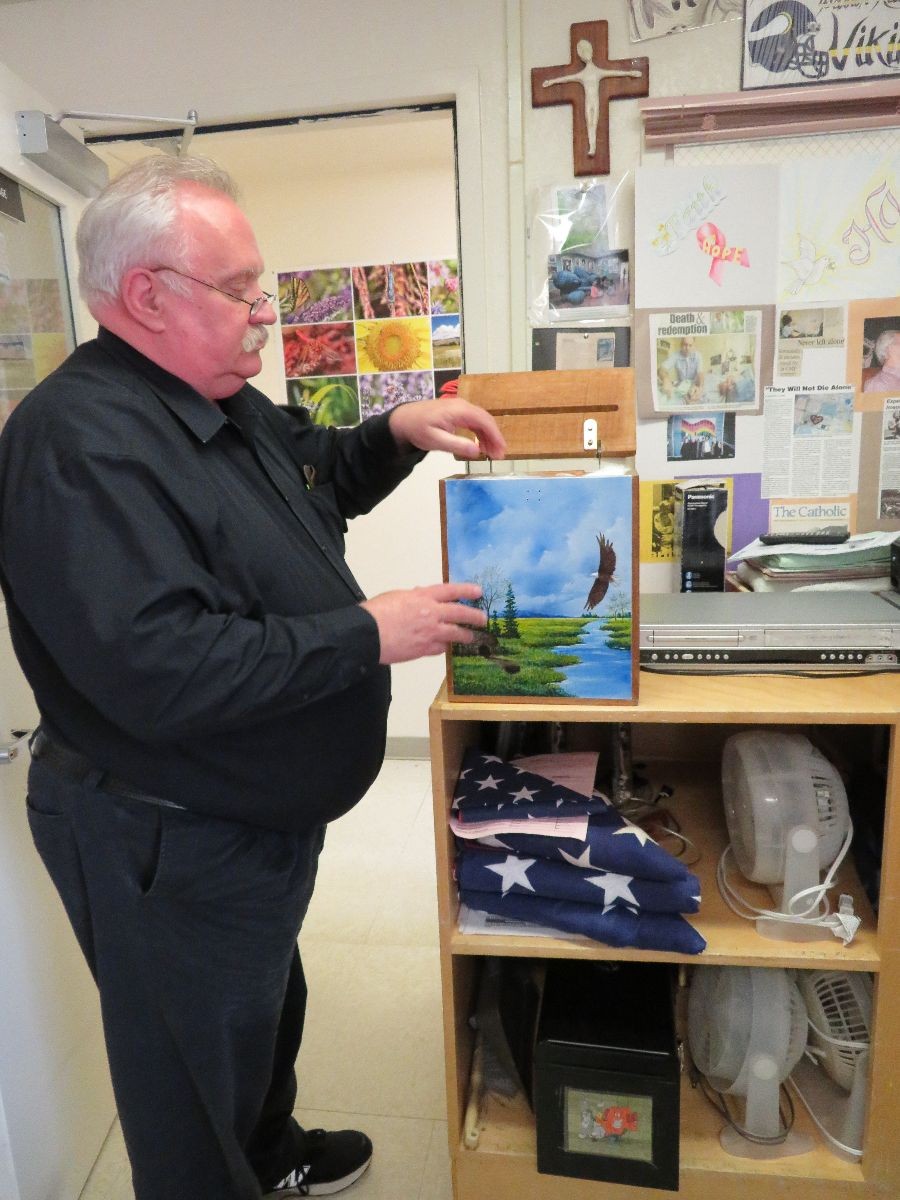 All faiths and beliefs are recognized in the hospice unit. The box Chaplain Knauf is looking at holds items for Native American rituals. On the shelf below is a stack of U.S. flags for veterans.