Life after prison - the struggles of re-entry

In 2013, Cadriel was serving a life sentence in Salinas Valley State Prison when he was granted parole. Having been in prison since he was 17 years old and serving over 25 years, Cadriel was unsure of where he would go upon his release. Then he met Jordan Jeske, a former inmate dedicated to helping others transition back into society after serving prison sentences.

On Thursday, November 15, California State University, Monterey Bay (CSUMB) hosted a talk with Jordan Jeske of J&J Prison Consultants in the University Center to discuss life in prison and the struggles inmates face when re-entering society. Several participants of Jeske’s re-entry program, including Cadriel, also spoke at the event, offering their personal journeys as an inside look into the prison system and means to reduce the rate of recidivism.

Jeske is the co-owner of J&J Prisoner Consultants along with Johnny Placencia. The two have both served sentences in California correctional facilities for felonies, and they now use that experience to counsel current and former inmates.

The event was organized by Professor Javier Cardoza-Kon who teaches a Restorative Justice course for the School of Humanities and Communication at CSUMB. 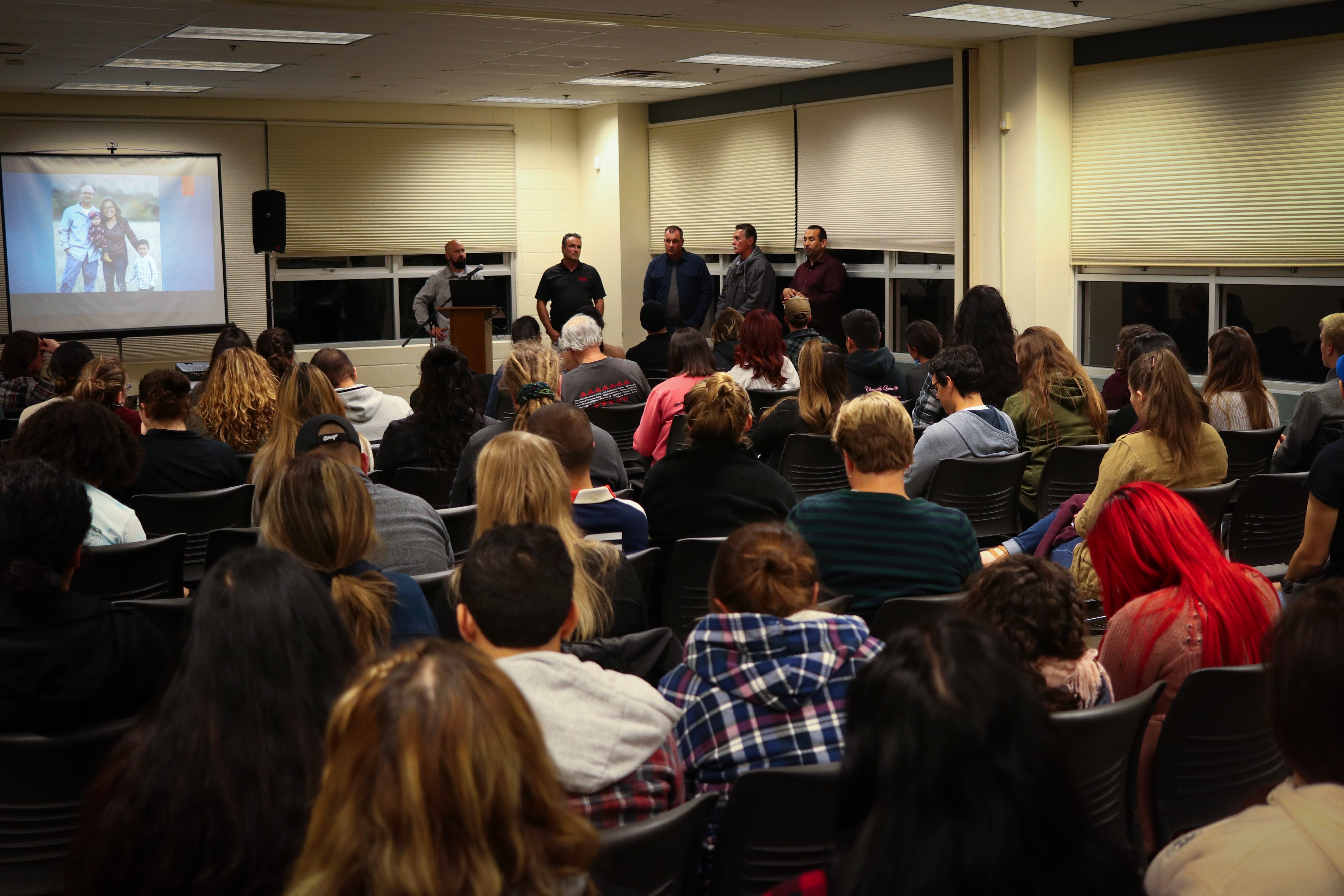 “Actually, it was almost by accident… I stumbled upon Johnny's story one night before class as I was surfing the net for stories on prison reform and thought it was quite compelling,” said Cardoza-Kon. After commenting that he would be interested in having Placencia as a guest speaker, a student immediately contacted J&J Prison Consultants, and before the end of the class period Jeske had agreed to visit.

California has been known for persistently high recidivism rates; 65 percent of those released from California’s prison system return within three years, according to a report by the California Department of Corrections and Rehabilitation.

“Johnny and Jordan are trying to address a problem of inmates trying to come back into society, most of them without any help. There’s not any sort of infrastructure, so many people go back to an old lifestyle, and it increases recidivism. So what they’re trying to do through their nonprofit J&J Prison Consultants is try to mediate problems like that,” said Cardoza-Kon.

“We’ve become a society that marginalizes certain groups, be it prisoners, or minorities, or poor people, or the homeless, and they become second-class citizens or no-class citizens. What I hope to get out of this talk is to bring what they’re confronting with rehumanizing people into the consciousness of our university,” added Cardoza-Kon.

Jeske said he was happy to come to campus and share his story. He sees CSUMB students as key to making changes: “They are the future leaders of America. One thing that I want to do is to encourage them to think outside the box when it comes to individuals coming back to their community from serving prison sentences.”

During the event, Jeske described his experience with drug addiction and serving time, explaining how he reconnected with his Christian faith and became inspired to help other inmates. Jeske is now a business owner and sits on the board of Community Alliance of Safety and Peace, an organization dedicated to reducing violence in Salinas.

On top of J&J Prison Consultants, Jeske has established a re-entry home with his wife Antoinette. The family is currently hosting six former inmates in their home, providing them with stable housing. Their program follows a three-prong approach for the successful transition of prisoners back into society. This approach includes providing former inmates with a structured living environment, job opportunities, and moral rehabilitation.

“He gave me employment from the very get-go. When I came into the program, I had a job already. I had a stable living environment… where I could come lay my head down in peace and safety,” said Kirt Sarkine, a former inmate who served 31 years in prison. “Also, there was that moral compass… We had a family that had morals.”

Despite there being two state prisons in Soledad, Jeske’s program is the only prisoner re-entry program of its kind in Monterey County.

“Having burned all my bridges, I spent more than a decade going back to the old neighborhood because I knew somebody would give me a couch to sleep on. Usually it was in a drug-infested house, so I was pretty much on my way back in,” said Brian McAuley, a former inmate and current intern for Cornerstone New Hope Ministry. “The way that Jordan has structured the re-entry home is very unique. It should be that way for everybody that comes out that wants the opportunity to make changes.”

After hearing from the speakers, students and faculty were given the opportunity to ask the former inmates further questions. Student Kelsey Mikols was able to connect their experiences to her own family. “I feel that I’ve learned kind of a sense of what these inmates go through personally… That’s something that I’ve always wondered, the struggles that they face as individuals, coming out and being in prison. I related my brother to that situation, he’s kind of in a similar place. It was very eye-opening for me.”

This was Jordan Jeske’s first visit to the CSUMB campus, but he expressed interest in returning for future events.

“I know that these could be future lawmakers,” said Jeske. “There might be some people that get a job in the justice department, and they can actually change the culture, change society.”