Most people do not imagine the stale, white walls of a prison cell when they think about where they will die. However, this is the reality for prisoners with life sentences and elderly inmates, both of which are growing populations in our U.S. prisons.

“It's an unfortunate reality that most people who do life end up dying in prison,” said Marvin Mutch, a former prisoner for 41 years who was serving a life sentence in California prisons as a result of a wrongful conviction for murder. “One of the biggest fears I had was dying in prison.”

Mutch, who now lives as an exonerated activist trying to halt the increasing number of prisoners who continue to die behind bars, spoke with a group of California State University, Monterey Bay students and guests on Oct. 25. He was on campus with documentary director Edgar Barens for the screening of Barens' short film about prison hospice: Prison Terminal: The Last Days of Private Jack Hall.

"You're terminally ill and you die. You get your paperwork through and you're dead,” Barens said to describe what many terminally ill prisoners with life sentences experience in their final days. “It's a sad process."

Barens filmed more than 300 hours of footage over six months at Iowa State Penitentiary, earning the trust of guards, prisoners and administrators. Barens was fortunate to meet inmate Jack Hall who, due to his declining health and surprising story as a World War II veteran, became the focal point of the documentary to showcase the inhumanity of dying behind bars. 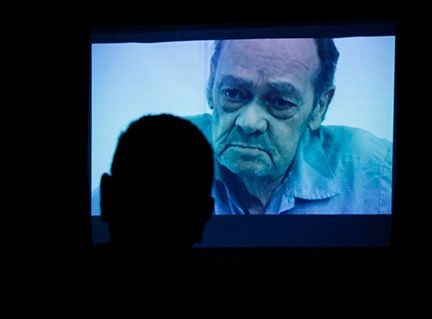 Photo by: Ryan Sigala
A viewer watches the story of Jack Hall (on screen) at the event.

Hall died in the caring company of prisoner volunteers and his son at the hospice unit at Iowa State, one of only a few prison hospice units in the nation.

Barens and Mutch would rather see prisoners released from prison in their final days, to allow terminally ill prisoners to die with dignity with family and friends.

As a present-day activist and former prisoner sentenced to life, Mutch shared his own story at San Quentin State Prison. Arrested in 1974, Mutch was tried and wrongfully convicted for the murder of thirteen-year-old Casey Riley. As a prisoner, Mutch frequented the law library at San Quentin to learn as much as he could in order to prove his innocence.

Mutch was released from prison in 2016, leaving behind a legacy of prisoner activism, particularly with his co-founding of the San Quentin prisoner suicide watch and support group Brother's Keepers in 2005.

"Every murderer [I knew] in San Quentin was a Vietnam veteran," Mutch said, explaining the huge population of incarcerated veterans he encountered during his years in prison. Stories of veterans dying behind bars, like Hall, demonstrate a need for change with how the criminal justice system allows, even warrants, their deaths without respect for their lives or service.

The Monterey Bay Justice Project will host a documentary screening of Southwest of Salem on featuring the story of the San Antonio Four who were wrongfully convicted of child rape Wed., Nov. 29 at 6 p.m. in the University Center Ballroom. Exoneree Anna Vasquez will be there for Q & A. The event is free and open to everyone.

Photo by: Ryan Sigala
Director Edgar Barens talks about the making of the documentary.