By Sam Robinson and Erin Dobrzyn

The aging population and increasing number of inmates with chronic health conditions in California state prisons led the state to adopt measures that can release these prisoners from custody. However, due to the slow nature of the process and high denial rate, many terminally ill patient inmates die waiting for a decision.

In 2016 to now, the California Medical Facility (CMF) in Vacaville, home to the state’s only Correction Hospice Unit, 53 qualified patient inmates applied for Compassionate Release. “We had six granted but some died before release,” said Reverend Keith Knauf, director of Pastoral Care in the Hospice Unit.

In addition to terminal illness, inmates who receive a recall of sentence must be deemed no longer a threat to society, and have a place to go upon release.

Some released inmates spend the remainder of their days with family, while others go to non-profit hospice centers. There are two that Knauf worked with to place patient inmates from CMF.

“We had six granted but some died before release.”

One patient inmate at CMF, 66-year-old Aaron Grice, has been in the Hospice Unit since February. He applied for Compassionate Release in mid-April, and he is still awaiting a decision.

While Grice is hopeful, Knauf indicated it is rare for a request to be granted. He cited the complicated administrative process and receiving approval from multiple groups that need to sign off on the request as part of the problem. “You can have medical say yes, custody say yes and the court say no,” he said. If a judge denies a request no reason has to be given.

The determination process for Compassionate Release should take no longer than 30 days, according to California Department of Corrections and Rehabilitation (CDCR), but despite this protocol, Grice was told it would be 40 to 60 days before he knew his fate.

Inmates and family members place a great deal of hope in the possibility of receiving Compassionate Release. However, Knauf said that most are disappointed because of the high denial rate.

This emotional strain can lead to a loss of hope for the inmate along with the family, and sometimes accelerates the patient's decline and death..

Allowing inmates to spend their final days in comfort is part of the motivation behind Compassionate Release. However, saving the state money is also a key motivator. When an inmate’s sentence is recalled, or they are paroled, the financial burden is shifted away from the state.

The determination process for Compassionate Release should take no longer than 30 days, according to California Department of Corrections and Rehabilitation (CDCR), but despite this protocol, Grice was told it would be 40 to 60 days before he knew his fate.

However, granting Medical Parole is easier than Compassionate Release. There have been 160 statewide medical parole requests, with 107 granted, said corrections officials.

Despite being completely incapacitated, prisoners who are not paroled must be guarded around the clock. In one instance in 2008, the state spent nearly $80,000 a day to provide 24-hour nursing care and two around-the-clock guards for one inmate, the Sacramento Bee reported.

Medical parole allows incapacitate prisoners in California to receive parole before completing the end of their sentence, if they are released to a 24-hour care nursing facility.

Placing this type of inmate on Medical Parole shifts most of the cost to the federal Medicaid program, easing the strain on California’s budget.

Currently, there are 25 inmates out on Medical Parole according to Joyce Hayhoe, director of Communications and Legislation for the California Correctional Healthcare Services. Hayhoe said there can be 20 to 30 inmates on Medical Parole at any given time.

California’s first medical parole hearings took place in 2014, and the Board of Parole Hearings typically holds these hearings 45 to 120 days after inmate referral from the the correctional department.

As with Compassionate Release, the health of some prisoners up for Medical Parole declines so quickly that they do not live to see their hearing.

Under penal code 3550, prisoners who have been released on Medical Parole can still be subject to examinations by a doctor to determine if they remain medically incapacitated as well as restrictions on visitors or types of staff that assist the prisoner. 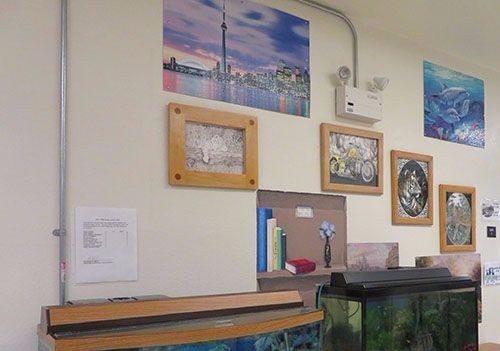 Drawings decorating the walls of the California Medial Facility's hospice unit were made by one of the few inmate patients who received Compassionate Release.

If an inmate’s condition improves while they are on Medical Parole, parole can be revoked and they can be returned to custody to serve out the remainder of their sentence.

Prisoners who are convicted to life sentences without parole, sentenced to death or convicted of the first degree murder of a peace officer are not eligible for medical parole or compassionate release.