The story of Valerie Anthony, a student, a mother, a veteran 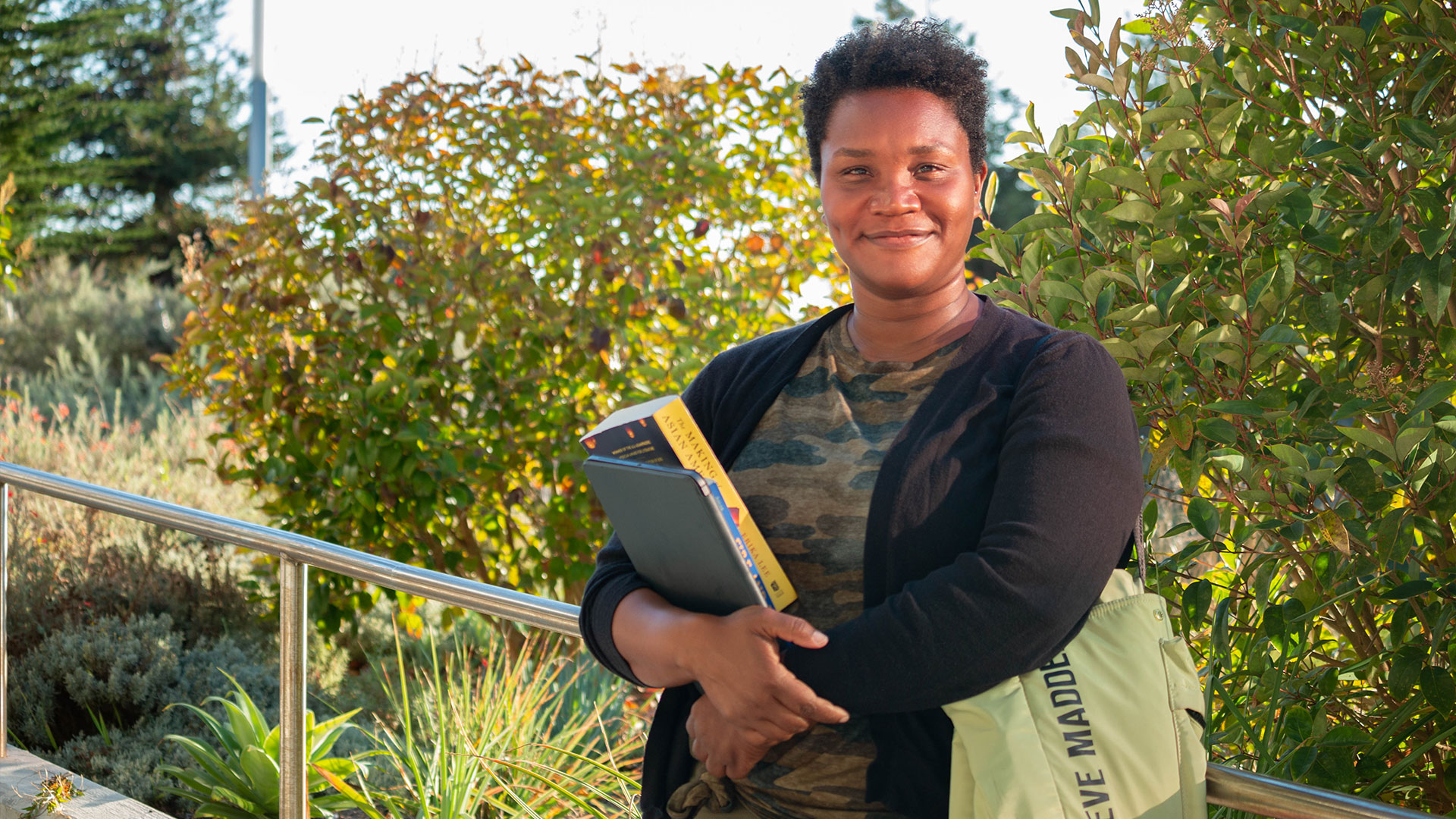 Valerie Anthony at the College of Arts, Humanities, and Social Sciences | Photo by Tatiana Muniz

Valerie Anthony, who is studying at CSUMB to become a writer, shares part of her story to offer insight to what it's like to be a veteran who is also a student.

She grew up the oldest of four kids in St. Petersburg, Florida, in close proximity to military bases for the Marines, Coast Guard, and Army Reserve.

She grew up middle class, sheltered under strict rules, and thought about going into the military as a way of getting out of her home and seeing the world.

Her biological father had been in the military briefly. Her step-father, who in 1997 was ill and close to dying when Anthony was a high school senior, encouraged her to go through with her plan, to gain experience and independence.

After her step-father passed, her mom met a man who was in the Army Reserves; he helped Anthony physically train and took her to a recruiter where she took the ASVAB test and did well.

She decided to join the Air Force. After she went through basic training, she was given a supply assignment.

“It was counting nuts and bolts and I was really disappointed,” Anthony said. “This is what I left home to do?”

But as a first-termer, she was allowed to cross-train, and for that career assignment she chose air traffic controller.

A world tour of duty

Her years in the military were very informed by 9/11, but also by seeing the world first-hand. She was given plenty of temporary duty travel (TDY) and went to Kuwait, Turkey, and Greece, just to name a few places.

“It opened up my perspective of the world,” she said. “I’m a Black woman who grew up Florida, and it’s still the South. I had a controlled and limited idea of what it means to be Black.”

In Kuwait she encountered a culture in which women — including her — had to be fully covered in public. In Turkey she went to a little spa and the women were kind to her.

“One of the women called me ‘chocolate’ and it was the first time I realized there was nothing wrong with me. It’s ok for my hair to be this way. It’s ok for everyone to be who they are.”

She describes those places as different and beautiful.

“The world was bigger than St. Petersburg, bigger than kids driving with Confederate flags on their trucks, bigger than America,” she said. “It was eye opening.”

In 2006 she was stationed in Barksdale Air Force Base in Louisiana when the military was looking for air traffic controllers to send to Spain or Honduras. But you had to know Spanish, which Anthony didn’t. So she took a language aptitude test, scored well, and attended the Defense Language Institute in Monterey to learn Spanish.

“Monterey was like Florida on steroids,” she said. “It had beaches but also mountains where you could go hiking. It was small, quaint, fairytale-ish. It reminded me of all these places I had been overseas. After I graduated from the DLI, all I wanted to do was come back here.”

First, she got her Honduras assignment. Then Italy, then back to her home state of Florida. She married a Marine, had three kids, and they were sent to various bases over the years. Anthony ended her career in Emergency Management, still working with aircraft, but learning to coordinate with military and civilian agencies for missions domestically and worldwide. When she retired from the Air Force after 20 years, she remembered the Monterey Peninsula, applied at CSUMB, and was accepted. She and her kids moved here in 2019.

CSUMB, then and now

She said that the campus in 2019 was very different from when she had last encountered it in 2006.

“When I was here in 2006, my friends who were people of color were here because of Fort Ord,” she said. “A friend of mine was living in former military housing here and I went to visit her. You’re driving, seeing military buildings, then all of a sudden ‘Oh, there’s a small campus here, in the middle of nowhere’.”

She continued: “CSUMB is huge now, with new buildings, a full campus.”

She said the remnants of Fort Ord are receding, as the stature of the campus and surrounding communities are growing.

She’s a Humanities and Communication major, with a concentration in English Literature and Creative Writing and Social Justice, and a minor in Cinematic Arts. She eventually wants to pursue a career as a writer.

But she’s raising her three sons by herself, so in the immediate future she’s planning to get her teaching credentials so she can get a teaching job that allows her work to be in alignment with her young kids’ schedules and vacations.

She also wants to encourage more diversity in schools. They live in Pacific Grove.

“It was a little bit of a struggle for my kids, trying to fit in, being made aware by others of their skin color,” she said. “It’s important that our curriculum be diverse. Every child needs to see themselves in it.”

She herself has fit in at CSUMB to the extent that she wants to.

She describes Giselle Young, CSUMB’s Veterans’ Services Coordinator, as amazing and readily available to help with anything that comes up. Since Covid, Anthony doesn’t come onto campus much. But before Covid, she appreciated the Veterans’ Services and Support office as a place to drop in and do work, stash her lunch, use the copier, or talk with other veterans who can relate to her experiences.

“I’m in my 40s and I just don’t need to sit in a library full of 20 years old,” she said. “That’s not where I am in life. My thought process is a little different and I’m a single mom. I’m consumed by being a mom.”

She calls the VSS office a haven.

She says that the adage “freedom isn’t free” is still relevant today. For Veterans’ Day, she encourages the campus community to reflect on the experience of soldiers.

One way she recommends others, especially civilians, can do that comes from one of her classes.

“I’m reading a book right now for my creative writing class by Tim O’Brien called The Things They Carried,” she said. “It’s a phenomenal book. When I read this book, it brings me back to combat training and deployment.”

Her ex-husband retired from the Marines after 20+ years.

“A lot of us, our military experience was defined by 9/11, Iraq, Afghanistan. I never had to take a life or defend my life. Marines saw real war. They saw war.”

She said everyone should read that 1990 book of short stories, written by a war veteran.

One passage is about Jimmy, a U.S. Army lieutenant who at the end of marches in the Vietnam War reads letters from a girl back in New Jersey who is a college junior.

“She was an English major at Mount Sebastian, and she wrote beautifully about her professors and roommates and midterm exams, about her respect for Chaucer and her great affection for Virginia Woolf. She often quoted lines of poetry; she never mentioned the war, except to say, Jimmy, take care of yourself. The letters weighed 10 ounces.”

Valerie Anthony has traveled the world and carries those experiences with her still; maybe one day she will have the opportunity to write about and share them with others.