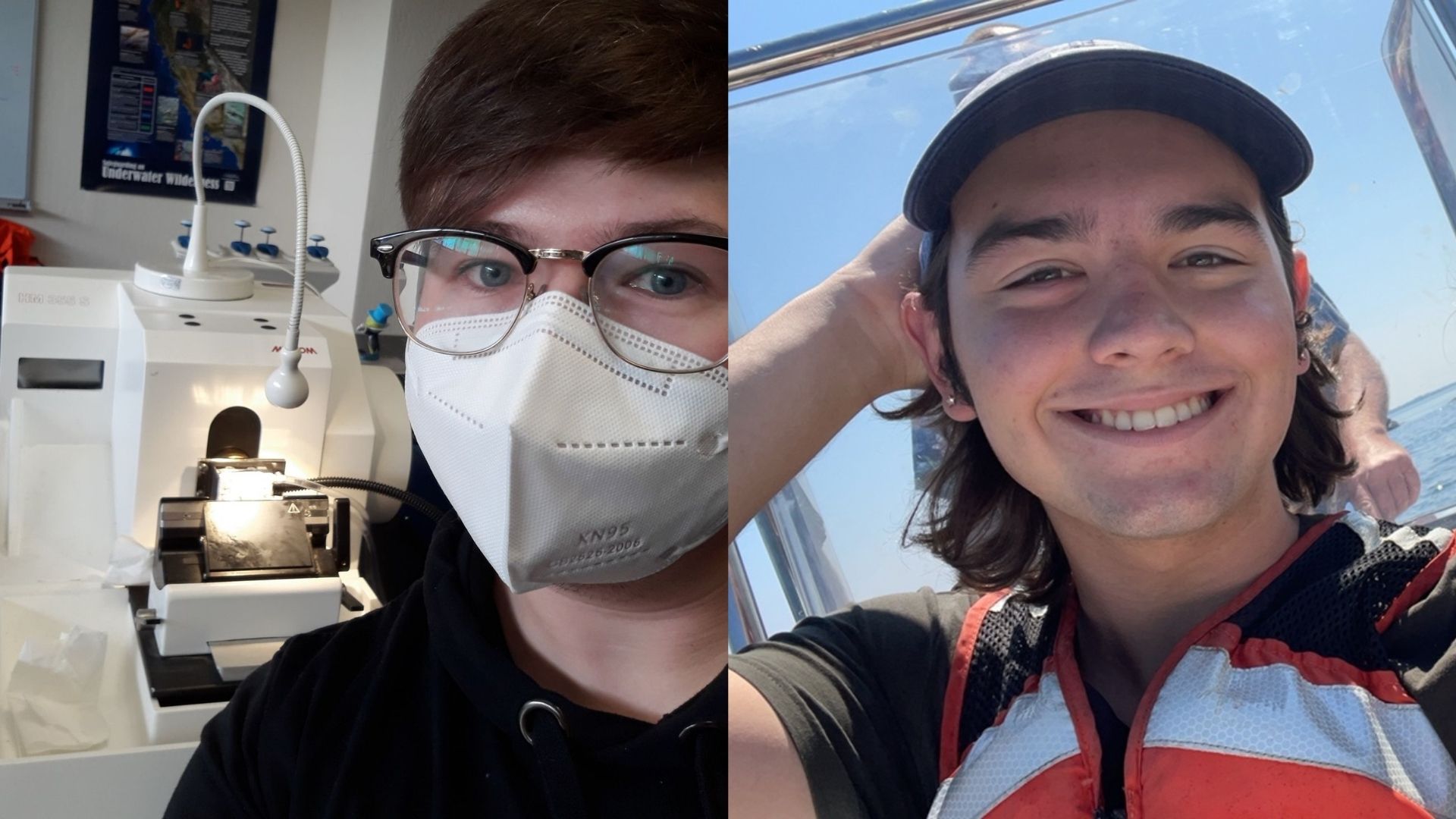 Two CSU Monterey Bay students have earned one of the most prestigious undergraduate awards for science, technology, engineering and mathematics (STEM) in the country.

Charles Scrivner and Spencer Hart Winter have been awarded 2022 Barry Goldwater Scholarships, which goes to top sophomores and juniors in STEM fields who demonstrate both exceptional merit and outstanding research aptitude.

Scrivner and Winter, who are both scholars at CSUMB’s Undergraduate Research Opportunity Center (UROC), are two of only five awardees in the entire CSU system.

"In the wake of climate change and other environmental crises, I hope to shed insight into how marine systems are changing at large spatio-temporal scales,” says Scrivner, who’s a marine science major and a chemistry minor.

Winter, himself a double major in molecular biology and human development and family sciences, was mentored by Zurine De Miguel, Rob Weisskirch and Tim Hanks. He plans to work on molecular programming using DNA strands to form neural networks which can then be used to create fully biological robots.

“DNA-based robots have a lot of potential,” Winter says. “They're sustainable and biodegradable, and have possible avenues both as smart medicine delivery systems and as environmental cleanup crews since they can naturally sense and respond to molecules. The other hope is that they may give us some insight into how our own nervous systems developed.”

John “Buck” Banks directs UROC and serves as the Goldwater campus representative. Natasha Oehlman also works at UROC as a writing and professional communication associate; after working with Scrivner and Winter at UROC, she came away impressed by more than their scientific skills.

“They both have done a lot of work to bridge STEM — which historically hasn’t been inclusive — with historically marginalized communities,” Oehlman says.

Winter wants to break down still more barriers surrounding STEM by integrating it with art. In fact, he’s already begun: At CSUMB he runs a student publication called Creative Scientists that collects and publishes submitted artwork related to science and STEM, with the goal of showcasing campus talent and the possibilities afforded by merging art and science.

“Creativity and artistic sense is huge in science and can make an enormous difference in the impact of science and how effectively science can be communicated,” he says. “Even just experimental design can be very artistic, and thinking about experiments with a creative eye helps us find unique solutions to complicated problems.”

Colleges and universities can nominate up to four undergraduates for Goldwater Scholarships annually. CSUMB has had scholarship recipients for seven consecutive years. Each Goldwater Scholar receives money for tuition, fees, books, and room and board, up to a maximum of $7,500 per year—but Oehlman is among many who feel the greatest benefit isn’t financial.

“The name recognition of the award is powerful — it puts them in touch with scientific communities, makes them competitive for PhD research programs, and helps their chances for national fellowship awards,” she says. “Which is pretty awesome.”