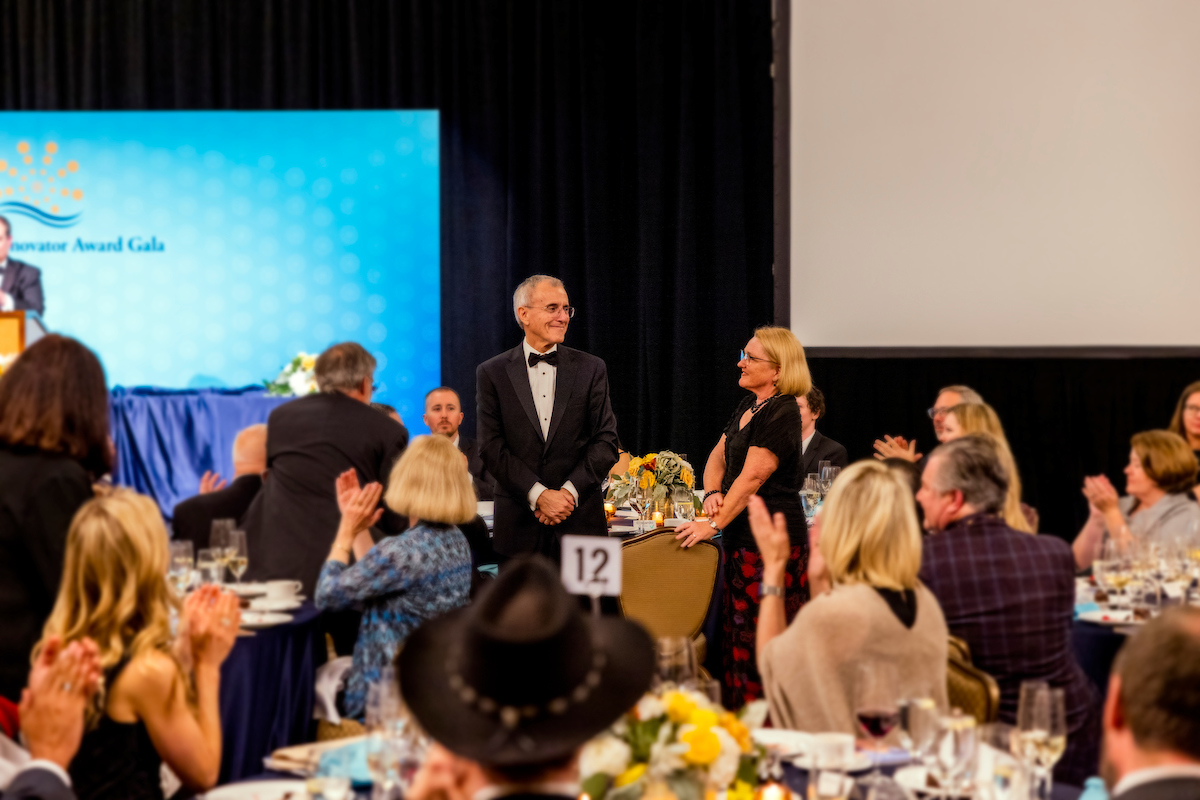 As the COVID-19 pandemic has receded from the case spike in winter, in-person events that were previously postponed have begun to return.

In the last two weeks, the graduating classes of 2020 and 2021 got to walk on a stage in front of family and friends in an in-person ceremony that they waited one to two years to have.

The same happened with the inaugural Visionary Innovator Award Gala. In 2020 the program had been designed, the menu was curated, tickets were being bought — and then the pandemic brought it all to a halt.

But two years later it finally came to pass, in person, on the evening of April 22, at The Inn at Spanish Bay.

A retirement celebration of President Eduardo M. Ochoa was added to the evening’s itinerary. He had originally planned to retire in 2020, but stayed on to lead the university for two more years through the worst of the pandemic.

The event began with a cocktail mixer, which represented for some the first big indoor, maskless event they have attended.

During the first half of the main program, KSBW anchorman Dan Green emceed the evening, cracking wry jokes, acknowledging guests, and waxing philosophical (“The most valuable gift is education”).

Green introduced Steven Mello, the son of the late Senator Henry Mello, to receive the posthumous award on behalf of his father.

“My father always said that there were no limit to how far you can go in life,” Steven told the audience, “if you don’t care who gets the credit.”

When Sam Farr came to podium to accept his award, he recounted the obstacles to the idea of bringing a university to the county. 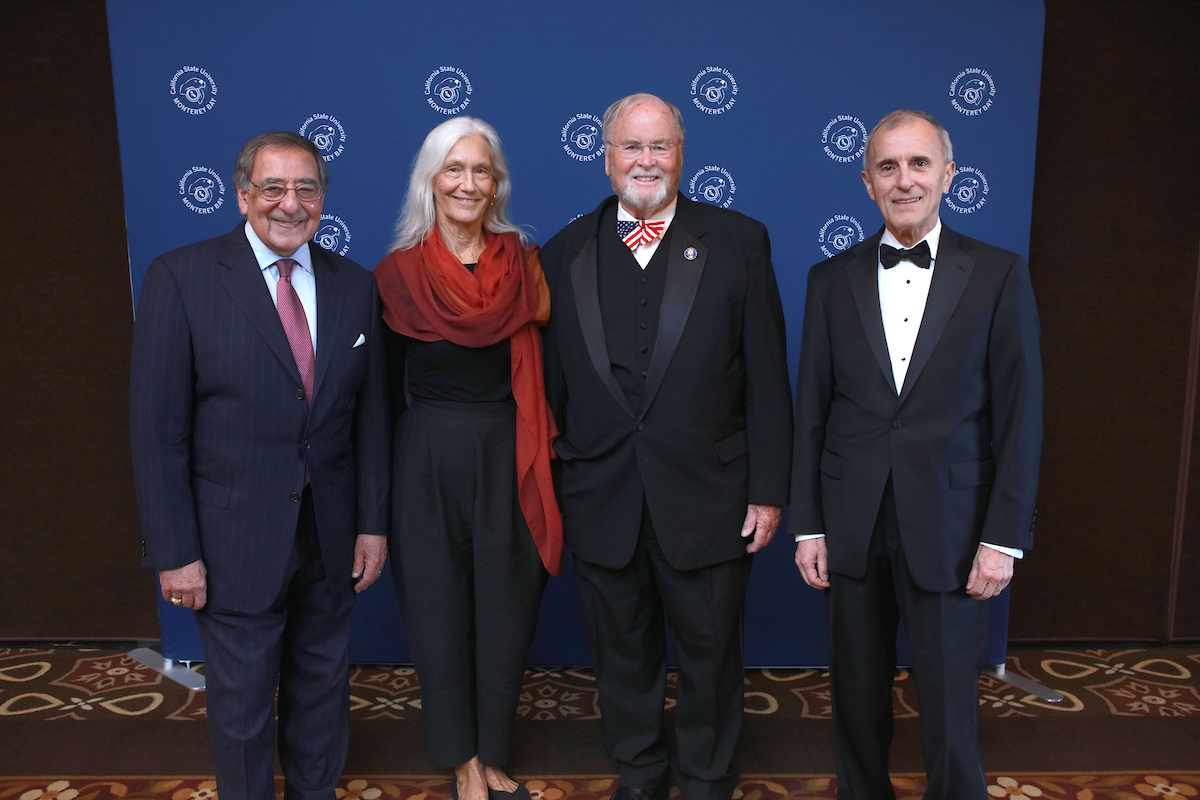 He said the “bluebloods of the Peninsula” first rejected the prospect in 1965, fearing it would bring the kind of radical culture and a politics they saw coming from other college campuses like UC Berkeley. He said the CSU wanted a campus established in Southern California instead, while a local military colonel told Farr “it’ll never happen [here].”

Leon Panetta opened with words of appreciation for his partnership with his wife Sylvia and their 60-year anniversary together.

He said that Henry Mello was someone he misses to this day: “With him, what you saw was what you got.”

He turned his attention to Julie Packard, calling her a “true leader” and praising the Monterey Bay Aquarium, he talked about immigrants like his own parents and the American Dream, about the Base Realignment Closure that closed Fort Ord.

Picking up from where Panetta left off, Dan Green quipped that the Fort Ord closure threatened more than just “losing Mortimer’s in Marina.”

President Ochoa then introduced Packard to the podium.

“We think it is fitting that the first recipient of our Visionary Innovator Award is Julie Packard,” he said. “The leader of an organization that has played a pivotal role in fostering a greater understanding of the ocean ecosystem, thereby advancing enlightened stewardship not only of the Monterey Bay but of the world’s oceans.”

After the screening of a short video about her relationship to the ocean, Packard spoke.

“There is no place I would rather be on Earth Day than with all of you here on the Monterey Bay,” she said.

Of all the habitable environments on Earth, she said, the ocean accounts for 99% of where life exists. She called the ocean the Earth’s lungs, pantry, playground, warehouse, a climate driver and source of joy. She said the Monterey Bay Aquarium has had 60 million visitors over the years.

She said to President Ochoa, “We love to hire your students [at the Aquarium].”

The second half of the gala was devoted to President Ochoa on the occasion of his imminent retirement.

Tim White, the CSU Chancellor Emeritus, said, “In meetings, some people talk a lot. Some people think waiting to talk is listening. Not Eduardo.”

He chronicled some of Ochoa’s accomplishments including removing blighted buildings and erecting new ones; growing vital programs in health sciences, sustainable hospitality and agriculture; and partnering with regional schools and colleges.

White introduced a series of videos about Eduardo as well as Holly, then Eduardo at last came to the podium to speak.

Ochoa recognized a number of people in the room and elsewhere as “wonderful pioneers for CSUMB.” 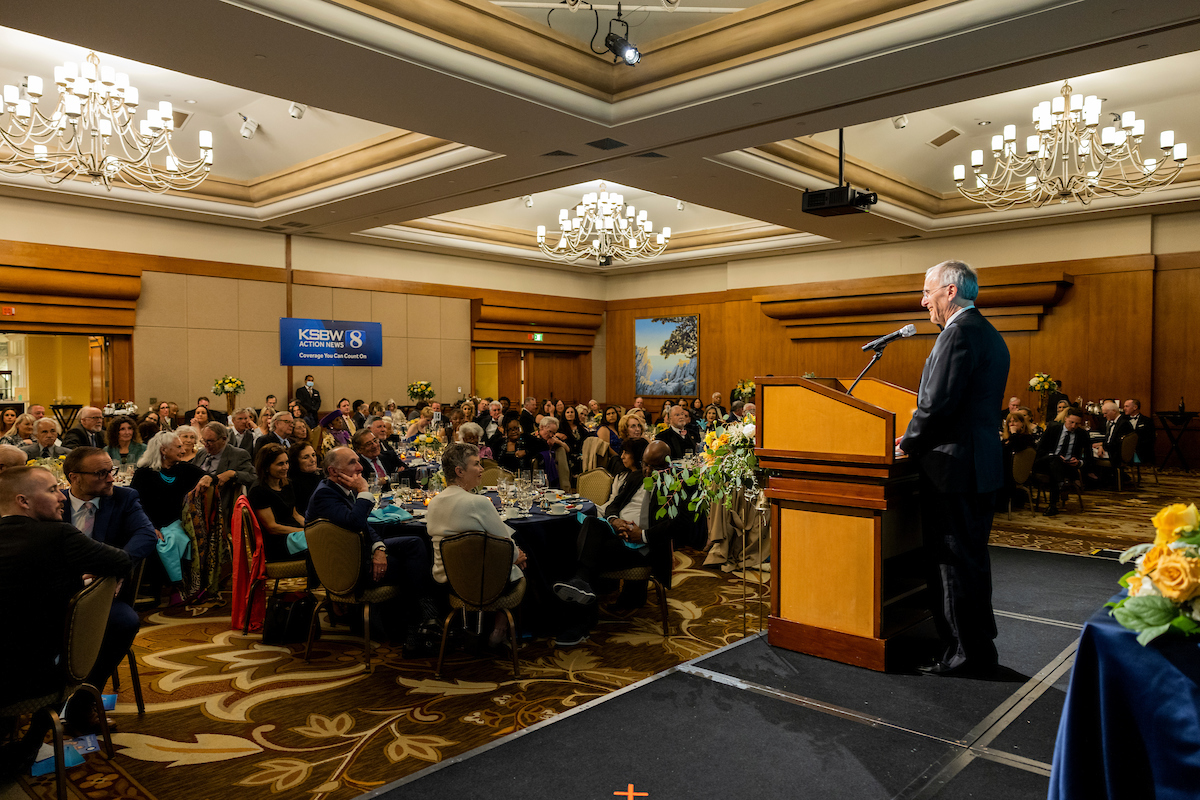 He recalled that he and his wife Holly were received warmly when he first arrived at CSUMB. At the same time, Hartnell College and Monterey Peninsula College also had new presidents — “the three amigos” he said. He expressed appreciation for donors and organizations that have supported CSUMB.

“CSUMB’s progress these past ten years is also due in large part to the extraordinary faculty and staff of our institution,” he said, “and to the remarkable culture Cal State Monterey Bay cast at its founding.”

After his remarks, President Ochoa received a standing ovation. And White concluded with a champagne toast: “Eduardo, you have left a remarkable legacy.”

With the formal events done, guests mingled and chatted before departing.

One guest, Jim Guss, said he was impressed with the event and the honorees.

“President Ochoa is fostering growth to make it brighter for kids’ futures,” he said.

Another guest, Paulette Lynch, said it was “galvanizing to know there are leaders like this in Monterey County” and that the Ochoas have created opportunity in the region.

The next day, President Ochoa was due to preside over a full day of in-person, make-up commencements for the class of 2021, who had missed out on the opportunity to walk due to the pandemic. With COVID-19 receding, it seems the time to celebrate past accomplishments has arrived.