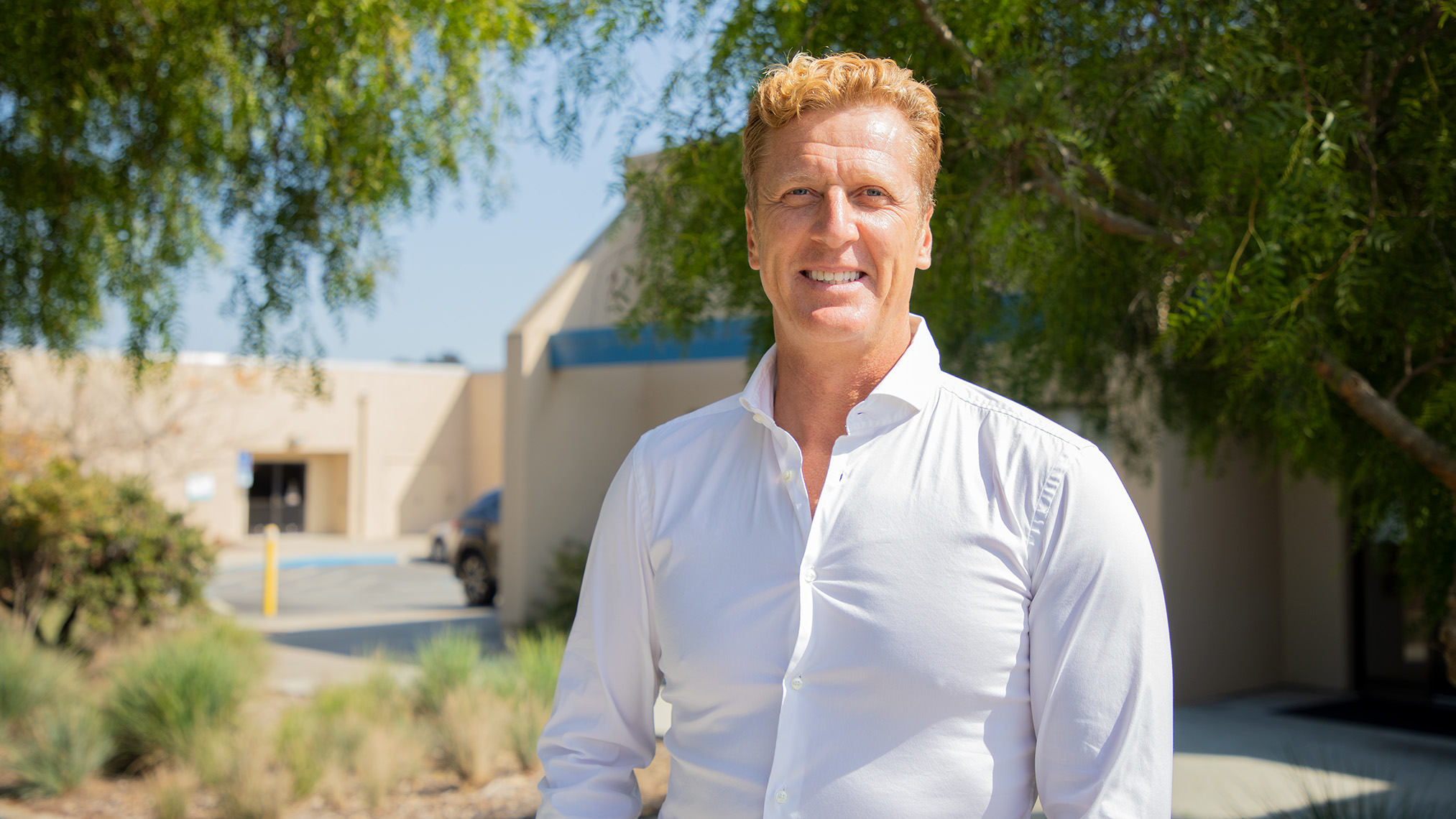 Harald Barkhoff, dean of the College of Health Sciences and Human Services. Photo by Florenz Tuazon.

Harald Barkhoff became the dean of the College of Health Sciences and Human Services on July 15. His arrival to the post looks like a continuum of a study and career trajectory that started in early formative experiences.

In Hawaii, where he was living and working prior to coming here, he shared that people would say to each other “Let’s talk story.” And that’s what he did.

Barkhoff grew up in Germany in a family of very modest resources and a high degree of temperance.

“We kids were never deprived,” he said. “But we were never allowed to throw out any food. If you asked for more food, my parents asked ‘Are you really hungry?’ There were moral implications. You didn’t get soda out of a vending machine because you could get water out of the sink.”

He said his generation grew up in the shame, guilt and consciousness of post-World War II Germany, with many excursions to Holocaust commemorations, which sensitized him to history, reconciliation and justice.

His parents improved their lives through education — his mother was the only one of nine siblings who completed schooling — and so they instilled in him the importance of education. In Germany he didn’t have to pay tuition, and he believes if that were not the case he would not have attended university.

“This is why I’m sensitive to lower student costs and equal opportunities,” he said.

He described his younger self as hyperactive, a lover of the outdoors, and a voracious reader, and believes those forces guided him to earn a master’s degree in kinesiology and a doctorate in sports psychology.

“My dad had certain priorities,” he said. “Education and travel. Germans are known as big travelers, being curious about different places and cultures. I see myself as a lifelong learner.”

That interest in different cultures, combined with a love of sports, drew him to Hawaii and surfing. He lived and worked in Hawaii for 20 years.

He was most recently a tenured professor and department chair in the Department of Kinesiology and Exercise Sciences at the University of Hawai'i Hilo, College of Natural and Health Sciences.

In a welcome email to the campus, CSUMB Provost Katherine A. Kantardjieff wrote that Barkhoff’s accomplishments at UH Hilo included “guiding the development and implementation of a certificate program in indigenous health at UH Hilo, leading the growth of the KES Department through expansion, the successful recruitment of diverse faculty, and meeting the needs of indigenous students through a culturally sensitive indigenous-focused curriculum.”

Barkhoff said he was eager to learn about the very diverse community there, and about indigenous knowledge and world views. He registered at the local community college and studied Hawaiian language, chants, and hula dancing. At UH Hilo he became part of a movement to decolonize and indigenize the curriculum.

“In Hawaiian culture, a lot of indigenous culture, people are not the center. The environment is,” he said. “When you get the lei, the physical environment is being put around your head. At that moment you are the center. Hawaiian’s have a chant to ask permission to enter the ocean before surfing. That’s a humble approach. Nature is a big part of the community.”

Barkhoff said he didn’t grow up on the ocean, but has always felt a deep affinity for it. He believes it is cleansing. He relates its ebb and flow, its tides and demeanors, to life itself.

All these factors, and more, brought him to CSUMB.

He resonated with the mission of the College of Health Sciences and Human Services, its integration of social justice, diversity and inclusion as part of health, its community-based approach. He says the pandemic gave everyone a more vivid picture of the importance of health, and that awareness gives CHSHS’s mission even more urgency.

“Every community is different,” he said. “You never come in and say ‘I am here, this is how we’re going to do things.’ That’s a very colonized approach. I want to find this path forward together. So I build trust. I have to earn peopleʻs trust and for that I first have to learn.”

He said that he sees his job as serving everyone around him so they can succeed; to have important discussions but also action. He says that leadership comes with privileges, but it also comes with the Hawaiian idea of kuleana — responsibility. He wants to be easy to approach and to be professional always.

“And stay kind,” he said. “That’s a big part of the aloha spirit. In Hawaiian it’s called haʻahaʻa, being humble. They care more about you being a kind person and contributing to the community than if you have a PhD.”

He sees the influx of new leadership and staff at CSUMB as an opportunity to reset entrenched ideas that aren’t working and to bring fresh perspectives and experience to the campus. But he acknowledges that there is institutional and historical knowledge that is lost, and they will have to ask more questions to understand how things work.

He describes his attitude as one of positivity.

“In Hawaii we say, Aʻohe pau ka ʻike i ka hālau hoʻokahi. All knowledge is not taught in the same school.”

That could mean it comes from different people or places or experiences. Before he left Hawaii, Barkhoff’s kumu (teacher) gave him the blessing to leave and share what he had learned there. He was sent off with a sunrise ocean ceremony. He was given a massive lei and a kava drink to put into the ocean. It’s meant to symbolically connect the community he left with the community he joins.