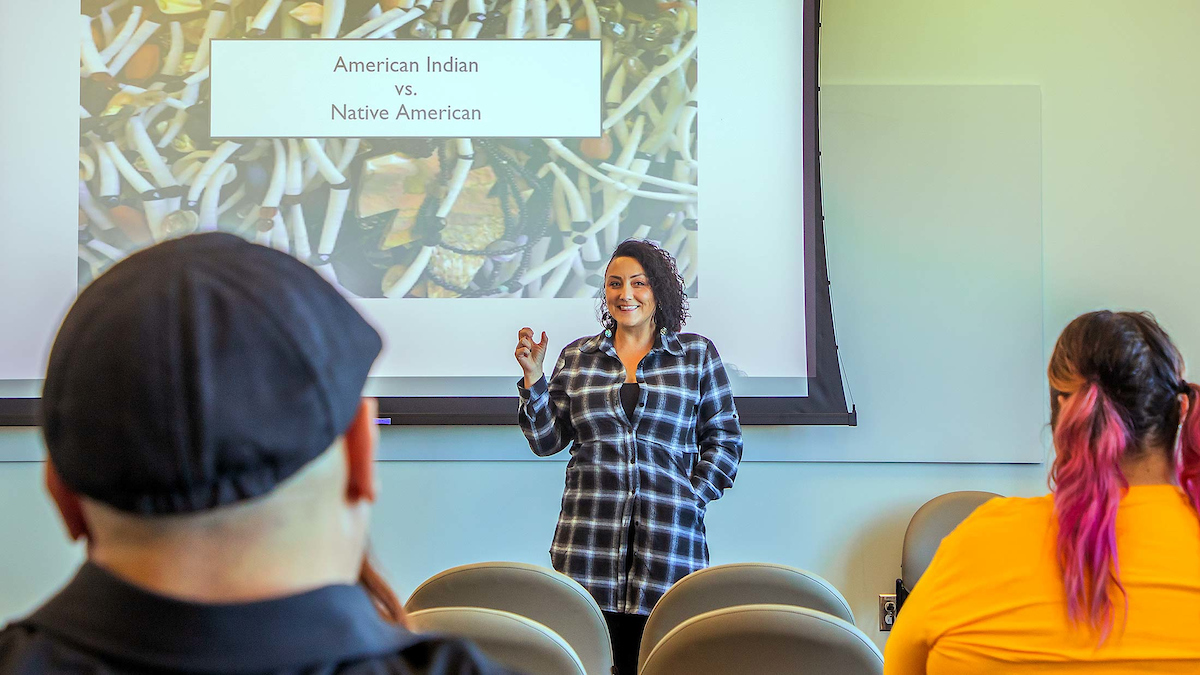 Dr. Melissa Leal spoke on Wednesday, Nov. 16, at CSUMB’s Otter Student Union at the invitation of the Otter Cross-Cultural Center. Born and raised in Sacramento County, she is a member of the Ohlone/Costanoan Esselen Nation, earned a Ph.D in Native American Studies from UC Davis, and is currently a professor, department chair, and tribal liaison at Sierra College.

Her talk, titled Native American Voices, was one of the campus’s two major celebrations of Native American Heritage Month. The other was a performance later that evening of "IYA The Ex’celen Remember," a play about an Esselen family grappling with history, which also includes poetry by Leal.

She began her talk, before a small gathering of mostly students and in front of a projector screen, with a greeting spoken in the indigenous Esselen language, which broadly meant “thank you” but literally translated to “my heart feels good.”

“I’m a descendent of people who were thought to be extinct, and whose language no longer existed,” she said.

She showed a presentation slide about Robert Muckle, stating that she would use language derived from his book Indigenous Peoples of North America. She framed her talk broadly around the issues of indigeneity, terminology, culture and sovereignty, animated by questions and dialogue.

“Who is indigenous?” she asked the audience.

To which one audience member replied: “Someone whose ancestors are part of a land.”

“So if you move away from the land, do you become less indigenous?” Leal asked.

Leal went on to explain that everyone can claim indigeneity to some land, and urged everyone to explore their own indigenous culture and ancestry.

She described the latter as a PC term that a lot of indigenous people do not subscribe too, especially the elders, preferring the term American Indian, which carries political and legal status and not just an ethnic or racial group.

“I am Hispanic, Latina, American Indian, and White. I used to check all the boxes [on government forms],” she said. “But if you check them all, they only count the Hispanic box. They like to say [American Indians] don’t exist. It makes it hard as a tribal liaison not to have accurate data.”

She surveyed the room, asking what indigenous people have in common. The responses: a deep connection with nature; a spiritual component and creation stories; persecution by oppressive groups; performance and crafts that today would be called “the arts.”

“Song, dance, it was never art,” she said. “It was prayer, ceremony, feasting, renewal. We didn’t make things to look pretty, but for a purpose.”

According to her bio, her dissertation was on “the reciprocal relationship between Hip-Hop Culture and Indigenous Communities with an emphasis on performance, activism, and visual sovereignty.”

She spoke about Native American tribes today having sovereignty in the United States, but having to endure the wars, aggression, trickery, religious persecution and genocide of the colonizing newcomers.

“Most of these colonizers were Catholic and Christian. How was it for your guilt if the people you’re stealing from are still around and see you? We don’t want to see the human beings we’re killing, terrorizing and stealing from,” Leal said. “They tried to move Indians onto reservations and rancherias.”

Rancherias were tracts of land set aside for homeless American Indians, often from different tribes, who were forced to settle there so that their land could be taken.

“None of the tribes on the San Francisco and Monterey Bay coastal regions are federally recognized. Why do you think?” Leal posed.

“Property values?” someone replied. To which Leal swept her arm across to indicate the totality of the region’s landscape.

“This land is the cream of the crop.”

She said she urges everyone to reclaim their indigenous roots to reconnect to the earth, to their ancestors, and most importantly to the language of their heritage.

“Those languages teach us so much more about the world than English and Spanish,” she said.

One audience member who teaches kids, some from indigenous families, in Salinas said that they are ashamed of their roots and are eager to lose their inherent identities in order to assimilate.

“That assimilation has to do with capitalism,” Leal said. “The way poor people are able to survive is by selling their stuff in larger towns to people who only speak Spanish. I think that carries over here. But there are indigenous people here learning their language. Spiritually, environmentally, we need those other languages.”

She expressed skepticism of the notion of the United States as a melting pot (because valuable native identity and knowledge is lost) or as a nation of immigrants (when whole nations of indigenous people were here already).

“But I understand why we’re saying that in these politically charged spaces.”

She spoke about descendants of indigenous people trying to reconstruct the links to their ancestors, about the Native American Graves Protection and Repatriation Act, the California Judgment Roll, and land acknowledgements (like CSUMB’s) being an important step that should be followed by other steps.

For instance, she said, “I’m meeting with a tribe in Sierra College’s boundaries to create a certificate program where tribal youth can come and learn traditional ecologic knowledge, burning practices, tribal monitoring so ancestors aren’t dug up, inclusive messaging.”

After her formal talk, she acknowledged some ambivalence about the occasion.

“I hate heritage months. For that month, [a few people] are asked to do all these things, then they collapse from exhaustion. We should celebrate people every day.”