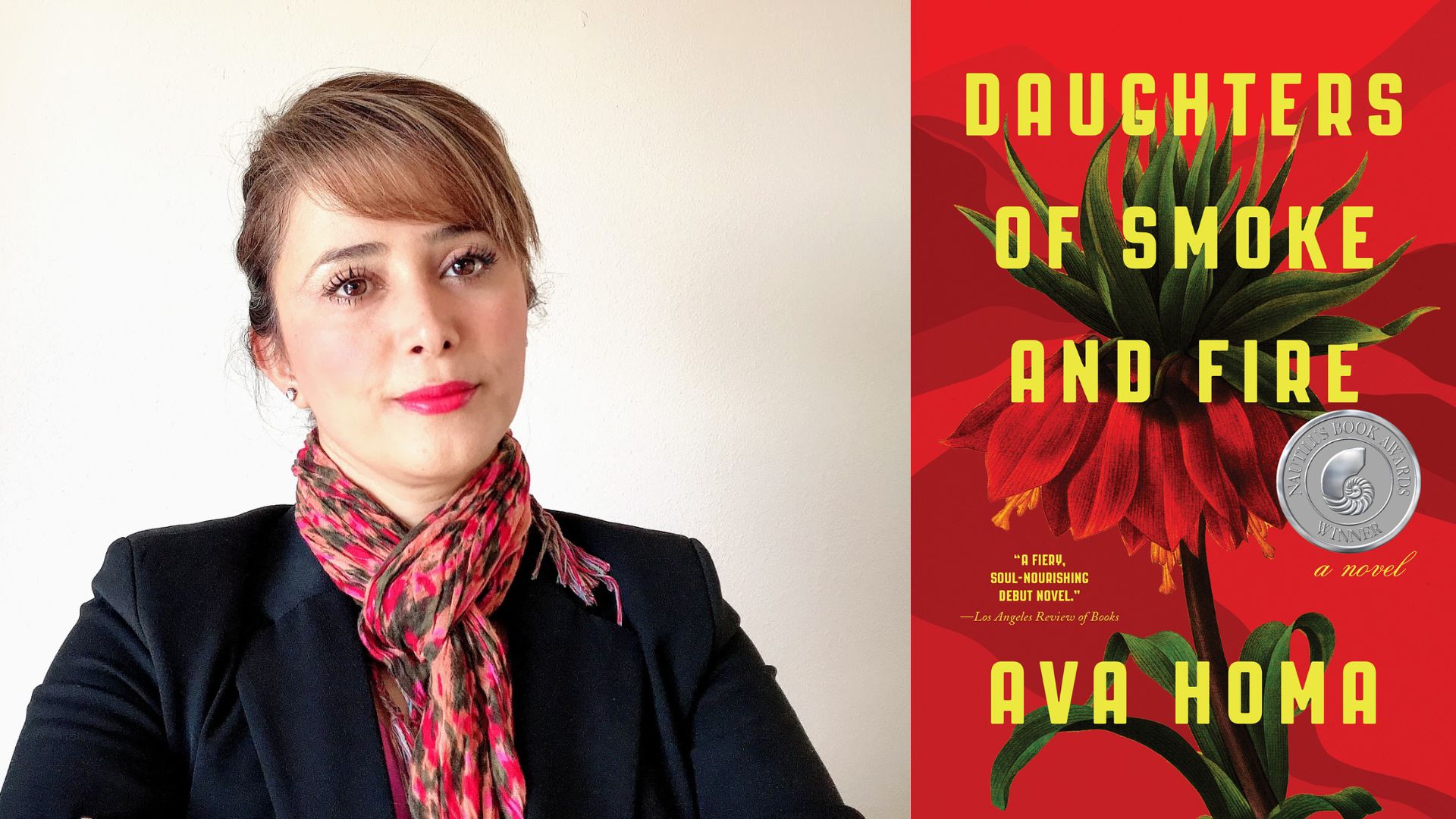 Ava Homa with her book Daughters of Smoke and Fire

The first speaker, at 4 p.m., is Andrew Loomis, Senior Advisor for External Relations to the State Department’s Under Secretary for Public Diplomacy and Public Affairs, who will talk about Ukraine and Myanmar.

He’s followed at 4:20 p.m. by journalist, activist, and author Ava Homa, who will talk about the women’s rights movement in Iran.

Her writing has appeared in the Globe and Mail, BBC, The New Statesman, Literary Hub, Toronto Star, and more. Her novel Daughters of Smoke and Fire tells the story of women's resistance in Iran, and will be available for purchase and signing after the event (which is free, RSVP to attend).

She answered questions ahead of the event about the current resistance movement in Iran.

Question: What does a novel like Daughters of Smoke and Fire allow you to do with the narrative of resistance in Iran that maybe wouldn’t come across the same way in journalistic reporting or a nonfiction book?

Homa: Media tends to report on destruction, not rebuilding; on death, not on rebirth and growth. A book like Daughters of Smoke and Fire surpasses stereotypes, bridges gaps, and allows for true understandings and connections to happen by taking readers into the everyday life of one family. The novel offers many moments of defiance, small and big. This matters, I believe, because little acts of resistance, ingenuity, and courage can change the world. Non-fiction books can offer larger contexts than journalism, but I didn't write one because I see that our global village is already inundated with information. What I believe we need is the power of untold stories to help us metabolize facts into knowledge, and knowledge into wisdom. Literature can give us the depth and transformation that we need to live a more harmonious life.

There have been other uprisings in oppressive countries that did not succeed. How hopeful are you that women will prevail in Iran? And why?

Women in non-oppressive countries seem to also be losing some of their freedom. As such, I am aware of the possibility of the uprising being hijacked, of women and minorities being yet again used and erased. But we can’t allow fear to shove us into inaction. We forge ahead, knowing that pushbacks are inevitable. We learn, we grow, we demand justice. That’s what Iranian and Kurdish women have been doing for over a century. We are unstoppable and we will eventually prevail.

Why was it the death of Mahsa Amini that sparked this level of protest?

Her real name — the name her mother calls out at her funeral — was Jina. It has the same roots as the words jin, woman, and jiyan, life. A decades-long policy of the Islamic Republic has been to either outright ban Kurdish names or make life so difficult that Kurds opt for two names, an official one that could potentially reduce discriminations and a mother-tongue one that friends and family endearingly use. The heart name and the facade name.

Her death — over a few strands of hair — coincided with the Iranian President’s white-washing of the state’s image in the United Nations in New York. The current U.S. administration has been showing an interest in signing a deal with the Islamic Republic which would improve the economy for the citizens of Iran but would also greatly empower the Islamic Republic. Meanwhile Iran’s ally Russia is too steeped in war to assist the regime.

So much was aligned for this to happen. Yet, too much wrath at the government has been brewing for too long. The Islamic Republic has shot, imprisoned and executed hundreds of thousands over the years, has failed to provide basic welfare for its citizens, and controls every aspect of their private lives. On a daily basis, Iranians deal with an increasing array of problems — financial, safety, and environmental — to name a few.

They merge when Iranian feminists embrace intersectionality and acknowledge the ethnic oppression that Kurds face. But that hasn’t always been the case. Iranian Kurds are affected by what Kurds achieve in Syria, Turkey, and Iraq. The very slogan of women-life-freedom that’s chanted daily in Iran was first chanted by Kurds in Syria. Women-life-freedom are the pillars of a Kurdish feminism called Jenology, a portion of democratic confederalism. The ideas were founded by the jailed Kurdish leader Abdullah Ocalan who famously said that “a country can’t be free until women are.”

When did you leave Iran? And why? What would have to happen for you to go back?

Sixteen years ago. For freedom. And when the Islamic Republic is toppled, which can happen in my lifetime, I can travel safely back. Until then, I won’t risk it. Monterey is too beautiful and I am happy here.

Regarding the California State University Monterey Bay event where you are slated to be a keynote speaker, what do you want to share and convey?

I have two goals: to be a voice and to inspire the audience.

Your writing seems very engaged with the real world. Do you also use writing or reading for escape?

Where to? I like reality in its ungraspable vastness and complexity. There’s so much beauty and awe in it. But, reality is not limited to the human world. I like to read and write about nature, the generous Pacific Ocean that allows me to swim and paddle alongside seals and sea otters, the Big Sur mountains that help me feel small, connected, part of the breathtakingly intelligent, mighty flow of life. I like to write in nature. I tend to  take a notebook with me when I hike or walk, so I can write.

Do you ever wear a headscarf?

Never! Why would I? Do you?