Bernard Green is helping to create an alternative transportation culture at CSUMB.

Green’s work has earned an excellence award from the Transportation Agency for Monterey County.

The award was among 10 presented at a recent TAMC board meeting; they recognize individuals, groups and businesses for efforts to improve the way people get around in Monterey County.

Green, a junior Human Communication major from Los Angeles, works as the Monterey-Salinas Transit outreach coordinator on campus. He was nominated by his supervisor, Anya Spear, for his “creative and tireless work” to promote alternative transportation and coordinate outreach efforts to nearly 6,700 students and more than 1,000 employees.

“Bernard is helping to create an alternative transportation culture at CSUMB whose benefits, we hope, permeate throughout the county and reach us all,” Spear said.

“When the campus needs expertise, he does the research. If we need student buy-in, he presents at an Associated Students meeting. If there’s no funding, he applies for a grant,” she said. 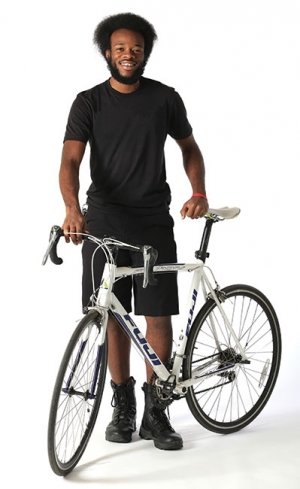 Bernard Green shares the joy of bicycling, and other forms of alternative transportation, with his fellow students

• He worked to secure changes to MST routes to better serve the growing student population and then employed creative ideas to communicate those changes to students.

• He helped to identify and convert a small car parking lot into a bike parking area where 14 bike locker stalls and a bike rack were installed. The project helped to remove cars from the campus core.

• He pointed out the need for additional bus stops along Inter-Garrison Road, and helped to identify an accessible location.

• He has proposed a design concept for a series of separated bikeways connecting Main Campus and East Campus, where 3,000 students and employees live.

• He represents the city of Marina on TAMC’s Bicycle and Pedestrian Facilities Advisory Committee; is a certified instructor with the League of American Bicyclists and founded the Monterey Bicycle Project.

“CSUMB is lucky to have a student bring so much value to our campus and our region . . . He’s a delight to work with. I can’t wait to see what he has accomplished in 10 years.”
— – Anya Spear