From Soldier to Student

The challenges and merits of being a student veteran, and how CSUMB provides support. 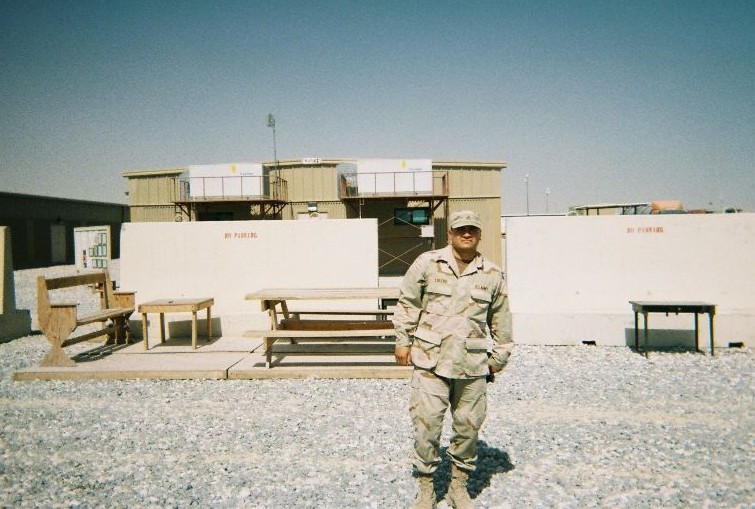 Antonio Lucero while stationed overseas in 2005-06 as part of Task Force Gator platoon.

Serving in the military can be one of the most adventurous, arduous, tedious, formative and dangerous times in a person’s life.

After the military, the transition to student life comes with challenges that may not be apparent to those who haven’t served.

For a moment, imagine you are a military service person. You enlisted about the same age as when your peers were heading off to college or jobs. You’re immersed in a culture of discipline and following orders, of hierarchy and chain of command, of service to your country.

You might be assigned to duty stations in several countries around the world for days, months or years. Maybe you get sent into conflict zones in ongoing wars. Hopefully you make it through without serious injury. But some of your battle buddies, your friends and allies, may not have been so lucky. This can cause emotional distress that is hard to talk about.

You are honorably discharged, but shifting back to civilian life can be difficult; the language, patterns and concerns are different. You might be affected by post-traumatic stress symptoms, which your civilian peers may have trouble relating to. Or the wide-open array of life choices you have may be daunting after having lived under military strictures.

To further your goals you decide to pursue higher education. The academic world has its own values, rules and expectations. You're generally older than your cohorts, with more real-world experiences under your belt. You have access to VA benefits, but the bureaucracy can be a maze to figure out. Maybe you have a family to support.

This is plenty to navigate. Plus you’ve got the same demands as any other student: paying rent, tuition and bills; keeping up with your studies; trying to figure out where you’re going with all this. Not to mention coronavirus.

Giselle Young was a military spouse for 10 years and is now CSUMB’s Veteran Services Coordinator.

“Military culture is very different from the culture of most institutions of higher learning,” Young said. “Military units follow a strict set of rules, and leadership is clearly defined and followed without question. This is not the case in higher education.”

CSUMB currently has more than 70 student veterans and more than 200 military dependents. Asking for help is not always easy for them; there is a military-bred self-sufficiency and pride that works against it. But help is here, as well as peers.

The mission of Student Veteran Services (SVS) is “assisting veteran and military-connected students in achieving their higher educational goals on our campus.”

To this end, Young works with Amy Whitson, a half-time veteran services adviser who supports and processes those enrolled in the online Extended Education degree programs.

They help student veterans and military dependents use federal and state benefit programs, connect them with on- and off-campus services, and are raising funds to create a Veterans Emergency Fund for immediate/urgent financial hardships.

According to the SVS website, the application processing for federal VA educational benefits can take between eight to ten weeks.

Student Veteran Services also manages a Veterans Resource Center (both reside under Student Affairs and Enrollment), which offers a place to gather for support services, study, meetings, and to just gather, kick back and relax with peers.

That space has been closed due to the coronavirus, but in its place there is a daily drop-in Zoom hour from noon to 1 p.m., Monday through Friday. There are monthly virtual VRC social events like “Friday Night Art,” and special workshops like the Nov. 9 “You’ve Got Skills” workshop hosted by Thomas Rogers, which will focus on translating military experience into marketable skills.

Ken Townend is a student veteran. He’s a collaborative health and human services (CHHS) major with a dual concentration in social work and public administration. He’s also president of the Student Veterans Organization and a chaplain at the King City VFW (Veterans of Foreign Wars).

“I served in the Army for eight years,” he said. “Five-and-a-half years in Germany, six months in Saudi Arabia, and Iraq during Desert Storm. I then went into the California National Guard, and my first official drill was being deployed for the 1992 Los Angeles riots.”

One of his most memorable times in service was being in Germany when the Berlin Wall fell.

He said that he learned discipline in the military, which has helped him as a student, but it’s also frustrated him when he’s been in classes that don’t exhibit a similar degree of discipline. Young can help bridge that culture clash between the military and academia. She helped Townend get into CSUMB.

“She has been a rock for all of us veterans,” he said.

“The VRC program and Giselle Young in particular have been a huge support system for me,” Lucero said. “If ever I need anything, I know that I can reach out to her, and she can help provide me with the support that I need or ask for.”

He’s an Operation Iraqi Freedom veteran who served overseas with the 115th Area Support Group of the U.S. Army. He was stationed at Camp Virginia in Kuwait, and was assigned to provide convoy escort and security for the Coalition troops. He was the noncommissioned officer in charge of the Delta team which completed over 100 missions without injury or incidence.

“I am currently attending college on VA Chapter 31 vocational rehabilitation benefits,” he said. It helps veterans who have service-related disabilities with employment. Like Townend, he’s also a student in the CHHS program. "Being a military veteran helps in the way that I have a strong focus on attention to detail and time management."

Assimilating former military service members into the campus isn’t always problematic. Townend cites the historical importance and presence of the Fort Ord military base upon which the university sits (and where plenty of legacy still persists).

For many, those years of military service can be among the most memorable of their lives. But there are hardships too. Some stay in for their entire adult careers; some leave but find other ways to serve the military and its people. A day like Veterans Day seems an apt time to reflect on all this.

Townend shares some aspirations about it.

“It would be wonderful to know who the veterans are and reach out to them to say thanks,” he said. “Do not let them be lonely as the suicide rate, which was high at one time, has gotten worse under Covid.”

Lucero adds to that.

“I think that in the current environment there is not much that we can do to celebrate Veterans Day responsibly,” Lucero said. “I think just telling any vet that you see a simple ‘thank you for your service’ is good enough for 2020.”