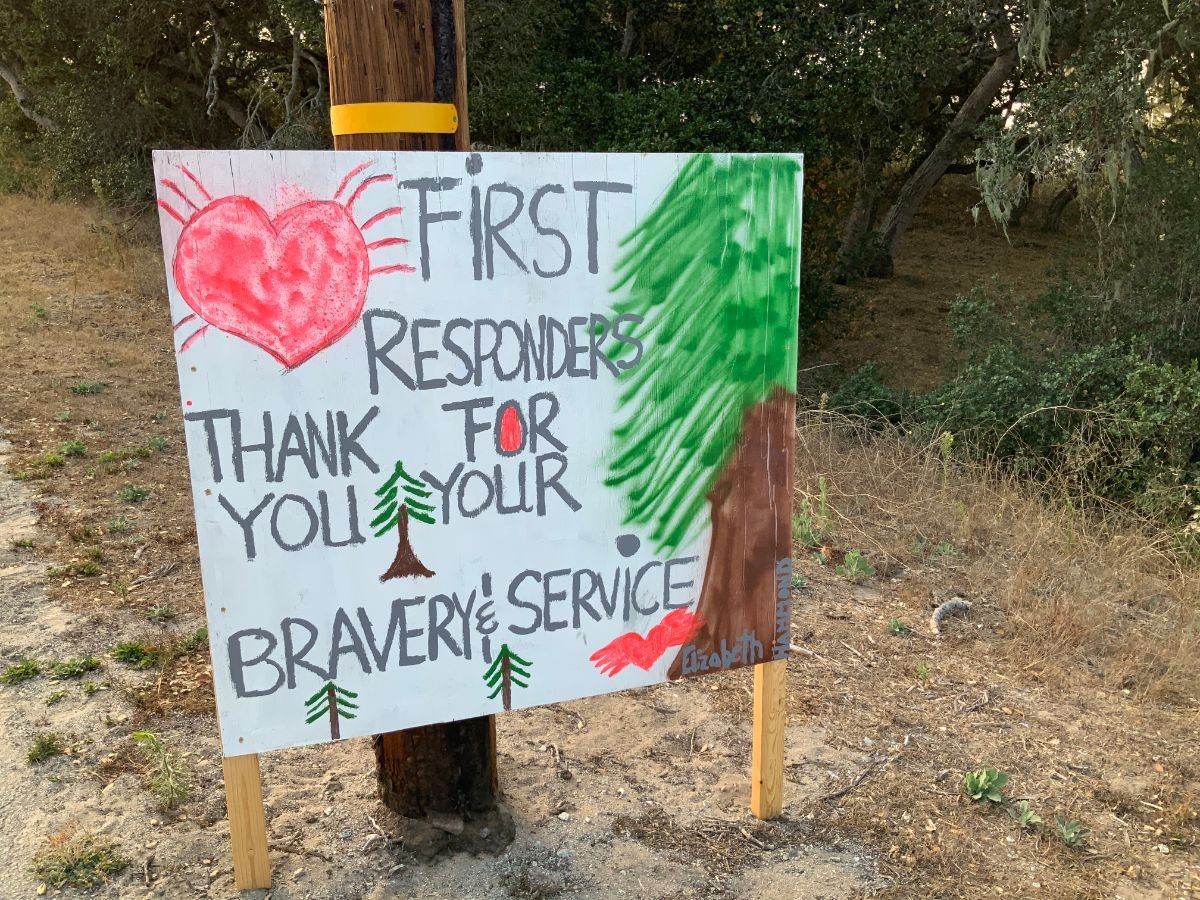 Photo by: Sydney Clemann
Kids from Girl Scout Troop 32096, some of whom have family who are firefighters, made roadside signs thanking those fighting the fires.

On August 16, a lightning storm ignited a wildfire southeast of Salinas, in Pine Canyon, near Mount Toro and River Road—the road that would give it the namesake River Fire. It grew to 2,000 acres that first day.

On August 18, the Carmel Fire near Carmel Valley and Dolan Fire in Big Sur broke out. According to Ken Folsom, CSUMB’s Emergency Manager and a former decorated firefighter, they could have begun from that same storm two days earlier.

“Lightning hits a tree and it smolders and smolders, then the wind kicks up and starts it,” Folsom said.

The campaign to fight the Carmel and River fires was led by CAL-Fire BEU, the San Benito-Monterey unit of CAL-Fire. (The Dolan Fire in Big Sur has another command post, that one headed by the U.S. Forest Service.)

“The dangers and hazards were several,” said Jacobo Artiaga, Fire Captain for CAL-Fire BEU. “High temperatures, low relative humidity, and dry vegetation made for a rapid spread. Accessing the areas was difficult due to drainages and [remote terrain]. It wasn’t easy to get equipment up there.”

At one point, the two fires seemed like they might grow into each other and merge. The sound and sight of air support helicopters and planes flying over the campus community through smoky air became a constant reminder of the campaign to control and extinguish the fires. This coincided with the first week of CSUMB's 2020-21 academic year, in an environment of distanced virtual learning, amidst a global pandemic.

In accordance with CAL-Fire’s priorities of life, property and environment, mandatory evacuations were ordered. CSUMB’s University Police Department were enlisted in that effort.

“They got called to the River, Carmel and Dolan fires to do evacuations,” Folsom said. “Multiple days upon days. There’s video of them driving to the Dolan Fire.”

Other campus resources were also deputized in the firefighting efforts. Because of its central location and large parking lots, CSUMB is an ideal staging area for ground support to fight nearby fires. So every vehicle on the River and Carmel fires came here to be repaired and demobilized. Sleeping trailers, tents and portable showers were set up on Parking Lot 59.

“We’ve assisted [CAL-Fire] before," Folsom said, referring to the Soberanes Fire in which CSUMB supported the efforts of 5,000 firefighters and support crew. “We’re partnered with first responders in a way that’s special.”

Folsom, having come from that world, is a liaison between them and the campus.

“It helps when you understand what they’re talking about, their needs, when you come from an emergency background,” he said.

CSUMB also housed firefighters in the Pinnacles residence hall in single and four-bed units. Starr Lee and Cece Chavez, both Senior Facilities Coordinator for Student Housing & Residential Life, said that their numbers ranged from the 50s to 115 at a time, amounting to more than 1,000 bed nights (one occupant sleeping overnight) over 14 days.

“CAL-Fire guys and gals enjoyed running around campus, hanging out in the North Quad green, and running to grab food…at Hulas, Smashburger, Las Consuelas, Isidros, Starbucks,” Chavez reported. “The lobby space quickly became the movie spot as movies played all day/night for anyone to watch.”

“The first couple of nights the fires were so intense that instead of staying here and regrouping, the [firefighters] got sent straight to the fire,” Lee said.

He knows of three firefighters who, while fighting the blazes, lost their own homes to fire.

Folsom said that the job can be sometimes thankless.

“You go to someone’s home, put a fire out, and you go home,” he said. “You rescue the person, load them in the squad, and never see them again.”

Sometimes, though, it’s not thankless.

Melanie Cooper is married to Jeff Cooper, director of CSUMB’s Student Housing & Residential Life. Their daughter, whose school was in the evacuation zone, is a member of Girl Scout Troop 32096, which created signs thanking and supporting the firefighters. With Folsom’s help they placed them on both sides of InterGarrison Road where the firefighters would see them while driving to, or coming from, the fires.

“Families were uncertain of outcomes and this scared everyone—especially the kids,” Melanie said. “When you are feeling anxious or overwhelmed with emotions, find a way to help others. When you do this, you will always feel better.”

Fire Chief Artiaga said that it helps firefighters’ morale tremendously to know that the community is behind them.

CSUMB administration mobilized many resources in an effort to convert residential housing, left vacant to halt the spread of coronavirus, into evacuation shelters in case the county needed more.

CSUMB urged the campus community to sign up for OtterAlert text and email messages, and kept up a fire and air quality web page to track and share information. The CSUMB Emergency Operations Team received daily updates from fire and emergency offiicials. Folsom met with the CAL-Fire BEU firefighting command every day, getting briefed on the status of the River Fire and Carmel Fire.

The Dolan Fire in Big Sur and the CZU Lightning Fire in Santa Cruz are still active and being fought. With the expected heatwave and possible rolling blackouts, this Labor Day weekend will be trying for many.

On Sept. 4, CAL-Fire reported that the River and Carmel fires are 100% contained. Crews are “mopping up” and patrolling around the clock for hidden fires so that there is no reignition. Vehicles have come back from the line for repairs. Fire personnel are returning to their respective units or being reassigned to other fires. CAL-Fire vacated the campus on Sept. 4, but California Highway Patrol is still using CSUMB as staging for their support of the CZU Fire.

CSUMB launched a Fire Impact Reporting form, asking the campus community about their losses or displacements from the fires; Folsom said about 158 people have reported on there. Monterey County is continuing to track the River, Carmel and Dolan fires, and has compiled a webpage of resources to help or inform people. Gift card donations from the Naval Postgraduate School and Defense Language Institute are available to those who have been impacted by the recent fires at Monterey County Community Resilience Program.

The River and Carmel fires may continue to smolder, and smoke may drift across the campus and nearby communities from active fires in Big Sur and Santa Cruz. The impacts of this episode with wildfires will linger.

But the immediate threat is over. Now begins the clean-up, the lessons, the rebuilding and the healing.

Photo by: Michael Darcy of CAL-Fire BEU
Firefighting and ground support vehicles in a motor pool at a CSUMB parking lot.