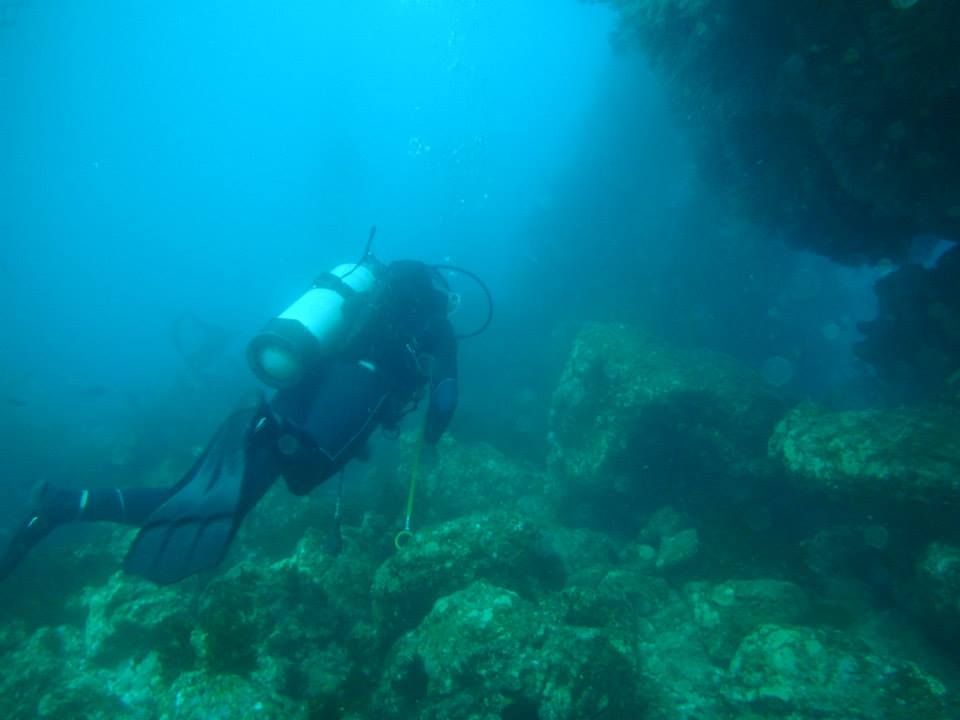 This Research Coordination Network (RCN) focuses on the planning and development of Regional Ecosystem Services Observation Networks. RESONs are regionally-focused networks of sensors and data sources necessary to take the pulse of coastal ecosystems, spanning their structure, function, and services provided to people. In our vision, RESONs extend the framework of the regional Ocean Observing Systems (OOSs) to explicitly consider biodiversity, ecosystem function, and species migration in the context of fisheries and coastal infrastructure needs. THis RCN will bring together marine scientists, modelers, engineers, spatial statisticians, and computer scientists from academia and industry in collaboration with stakeholders and managers. Funding for this project is provided by the National Science Foundation.

In collaboration with Rutgers University we are enhancing the capacity of polar scientists for communicating and engaging with diverse audiences. This project will create scalable, in-person and virtual research opportunities for educators and students to engage with polar scientists and their research through data visualizations, data activities, educator workshops, webinars, and student research symposia. The desired product is a set of data rich instructional materials and customized professional development trainings that virtually expand access and opportunity to engage more educators and their classrooms in polar science. This effort will improve the communication capacity of the polar science community. It will help bring real-world datasets, models, and simulations into the classroom and make scientific data from the poles and information about polar research widely available and useful to various audiences. The project will engage under-represented and underserved students in polar scientific research and many of the materials created and connections between scientists and educators are likely to be sustainable. Additional information can be found on our main project page, Polar Interdisciplinary Coordinated Education (ICE). Funding for this project is provided by the National Science Foundation. 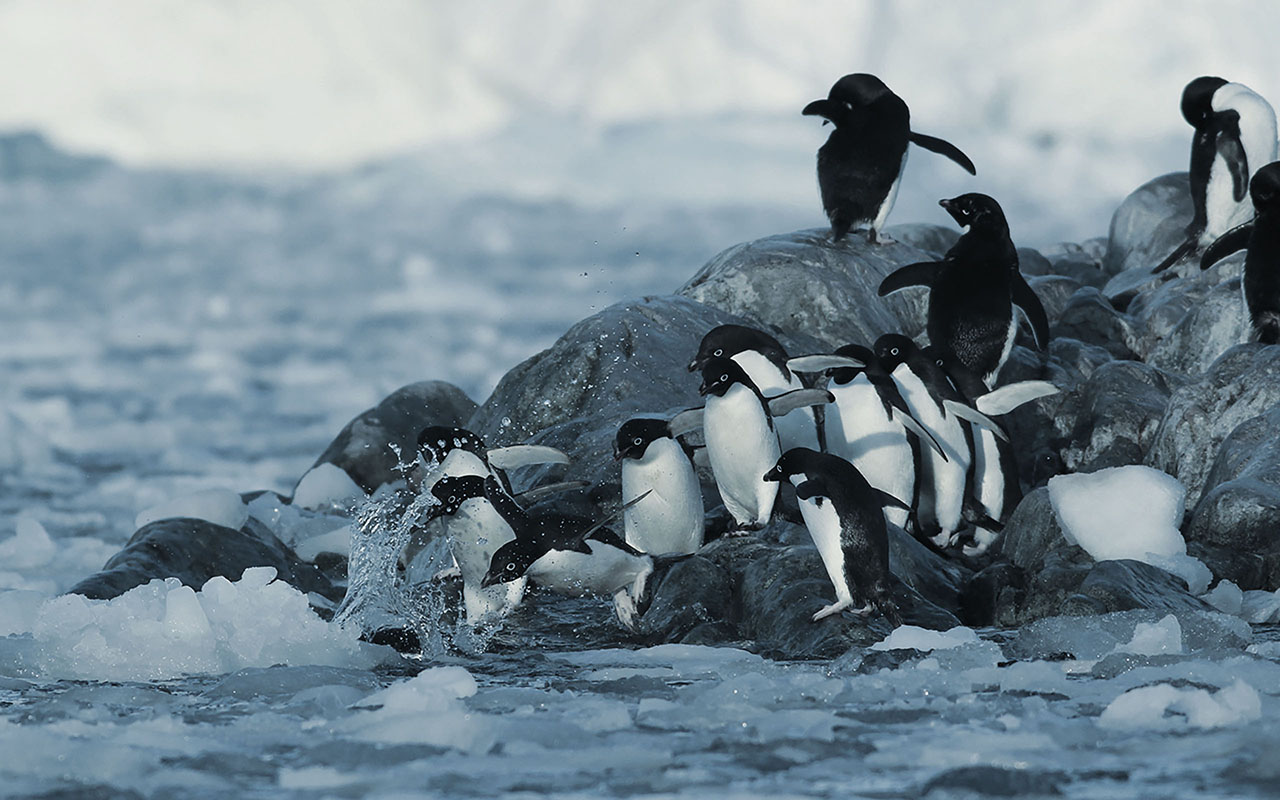 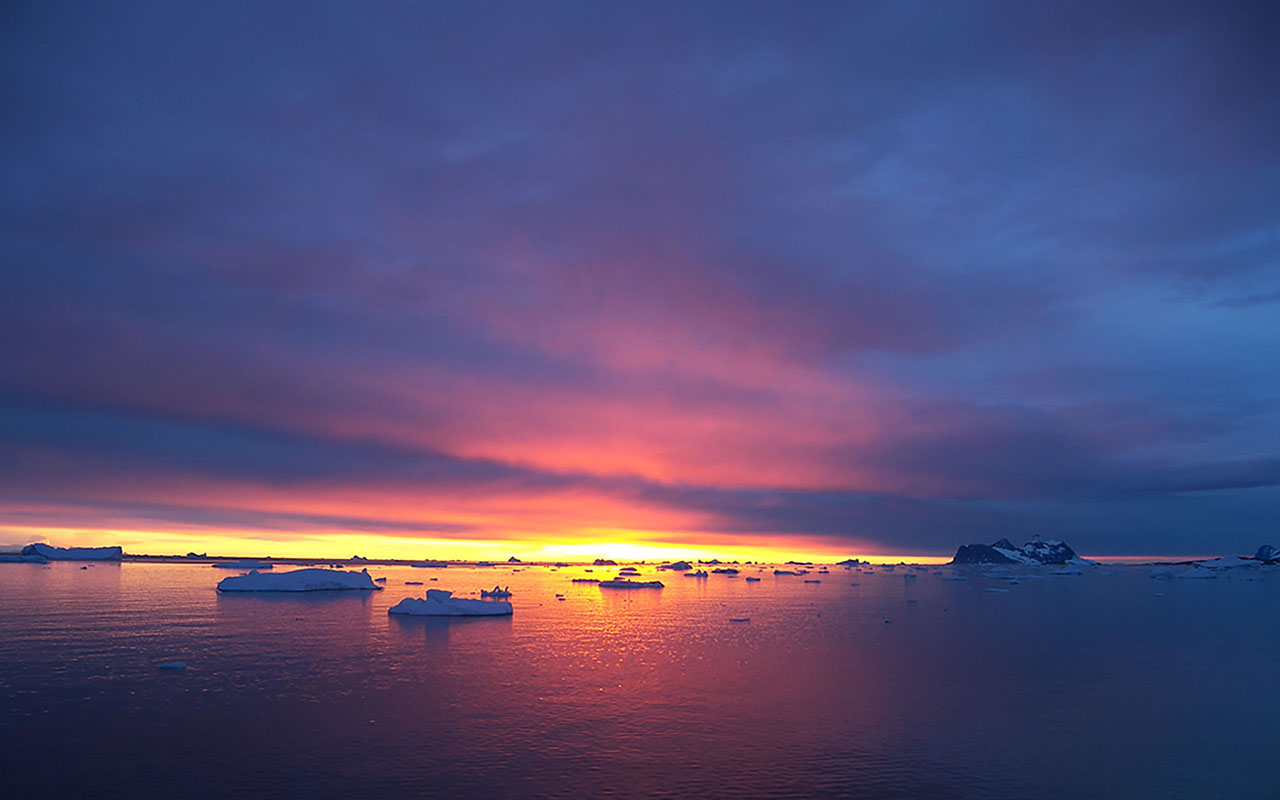 The value of habitat diversity in marine reserves: spiny lobster use of the intertidal zone at the Santa Catalina MPA

A guiding principle in the design of marine protected areas is that a diversity of habitats must be included to provide the complete range of ecosystem services for exploited species. This is especially true of species that use different habitats at different times in their reproductive cycles. In this study we propose to use a long term data set on intertidal habitat composition and demography of spiny lobster in the Santa Catalina Island MPA. This set of data is unique in that it contains information on intertidal habit composition and demographic information for spiny lobsters in the years preceding the establishment of the MPA, the year the MPA was established and in the years following the establishment of the MPA. As part of this project we will collect two additional years of survey data which will then be analyzed in a Before After Control Impact Paired Series (BACIPS) analysis. Our project can provide researchers and managers with strong quantitative information on the impact of the Catalina MPA on key demographic features of in populations of spiny lobster. This project will also provide insight into the importance of incorporating intertidal habitat into the design of MPAs that target spiny lobsters Southern California. Funding for this project is provided by the National Oceanic and Atmospheric Administration.

In collaboration with California State University, Los Angeles and UCLA we are conducting a project to enhance our understanding of how disturbance structures natural communities. Our work tests assumptions and predictions of an alternative view, that disturbance in marine communities shows predictable landscape patterns that depend not merely on spatial distribution of external forcing (wave stress) but also on biological processes determining the structure of species aggregations, in this case aggregations of mussels in the intertidal. Therefore, spatial patterns of gap formation and recovery in the intertidal should emerge from a unified landscape process. Our work emphasizes construction of a detailed GIS database using geospatial sampling methods applied to mussel bed sites in Barkley Sound, British Columbia.Our GIS data layers for each site include wave force, topography (tidal height,slope, and aspect), mussel size structure, mussel bed thickness, differentiation of layering, and size-specific attachment strengths stratified by layer. GIS interpolations and regression analyses are first used to examine assumptions of the hypothetical landscape process and then test specific predictions regarding spatial patterns in the occurrence of disturbance and recovery. Finally, we are conducting controlled field experiments test the key proposition that different mussel bed structures cause different resistance to,extent of, and recovery from disturbance. Data from this project will be made publicly available through the NSF Biological and Chemical Oceanography Data Management Office (NSF BCO-DMO). Funding for this project is provided by the National Science Foundation. 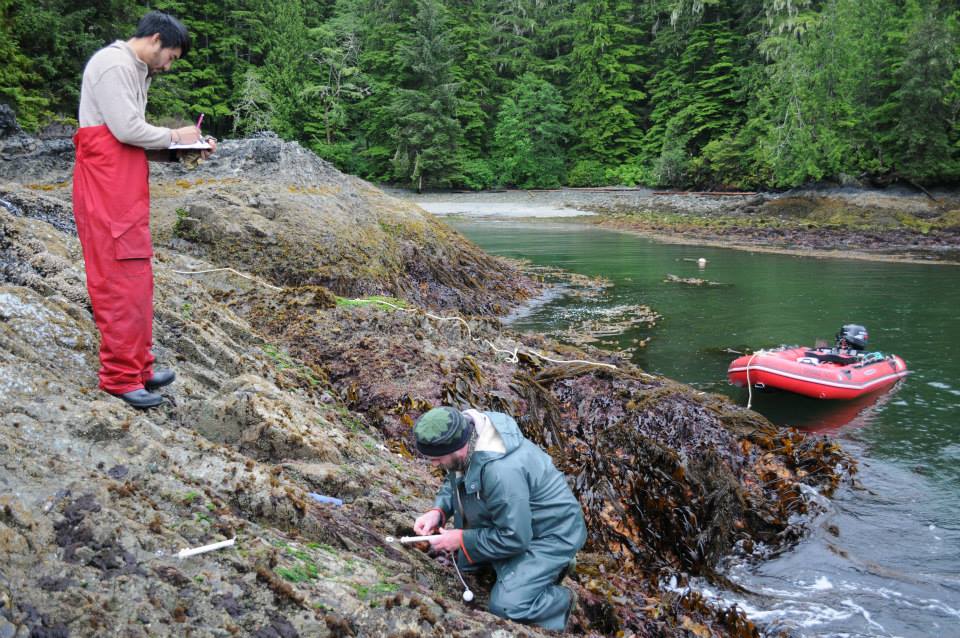 The seasonal dynamics of sandy habitat geomorphology and epifaunal associations on the continental shelf of Monterey, California

In many areas geomorphology drives species distribution and abundance. On the continental shelf, the sandy plains habitat comprises one of the largest habitats of the north-eastern Pacific and is of great importance to California’s largest commercial fisheries, Dungeness crab and market squid. Yet, large knowledge gaps remain and impede a clear understanding of the dynamics of the sandy substrate geomorphology as well as for understanding of what drives organismal distributions. This research will investigate how structural changes of the seafloor of the continental shelf (15-160 m depth) impact the biological habitat. Seasonal use of, acoustical methods (mulitbeam and side scan sonar) will be used to quantify geomorphological dynamics of the seafloor and video methods gathered via remotely operated vehicle will be used to quantify associated epifaunal species densities. The results of this research will not only fill needed knowledge gaps for the scientific community but, it will also provide timely information to coastal marine resource managers and policy makers. Additional information about this project can be found on the main project page (Link). Funding for this project is provided by the National Science Foundation.

It has been suggested that the distribution of many species, and structure of many habitats, is constrained initially by broad scale variability in coastal geomorphology and geology. Thus the spatial characteristics of rock types can be an important determinant of the types of organisms that can settle, grow, and survive in a given location. A faulted rock substratum creates crevasses that can be colonized by marine organisms such as abalone. Harder, weather resistant rocks form promontories that can affect local circulation, the locations of coastal upwelling centers and ultimately the formation of the large intertidal communities that occupy these headlands. At scales below which ecologists traditionally study these systems, the microscopic scale, rock micro-textures can also effect the benthic community that emerges in a single location. For instance, rocks can be rugose and hard at the microscale but appear to be smooth and friable when observed at larger scales. Consequently, the controls that rocks can exert on intertidal ecologic processes such as recruitment, growth and survival vary with varying sizes and types of organisms and with the spatial scale at which rock-organism interactions occur. Hence a strong geological habitat/species relationship may exist across multiple spatial scales and these relationships are strongly dependent on the scale of observation. As part of a collaboration with Moss Landing Marine Lab we developed high resolution, three dimensional models of intertidal communities in California that can be used to quantitatively assess the relationship between geomorphology and community structure in the rocky intertidal. This project resulted in the development of new interdisciplinary methodological approaches and tools to study California’s coastal environments. Funding for this project was provided by the California State University Council on Ocean Affairs Science and Technology.

Development of ecosystem based management strategies for Long Island sound

Our lab participated in a comprehensive review of the last 20 years of marine and watershed research in Long Island Sound as part of an effort to advance an ecosystem based approach in this large urban estuary. The results of this work resulted in the publication of the first comprehensive Long Island Sound Research Synthesis Volume. Funding for this project was provided by Connecticut and New York Sea Grant.

Landscape based mechanisms of boundary formation in rocky intertidal communities

As part of a long term collaboration in British Columbia, Canada with the Center For Environmental Analysis at California State University, Los Angeles and the California Institute of Technology our lab investigated the interaction between landscape driven physical and biological processes that drive boundary formation in the mussel Mytilus californianus, a prominent member of rocky intertidal communities in the Pacific Northwest. Classic ecological theory views the distributional limit of M. californianus as an equilibrium process whereby the predatory sea star Pisaster ochraceus maintains the lower distributional boundary of the mussel in the intertidal by foraging on mussels that fall within the upper limits of the sea stars foraging range. Our experimental studies suggested that this interaction may be a nonequlibrium process that is in part related to the interaction between the physical landscape, physical forcing factors and the ability of Pisaster to forage in different physical environments. Our work has helped to further quantify the biological and physical mechanisms that drive boundary formation in marine species that inhabit coastal communities. Funding for this project was provided by the National Science Foundation. 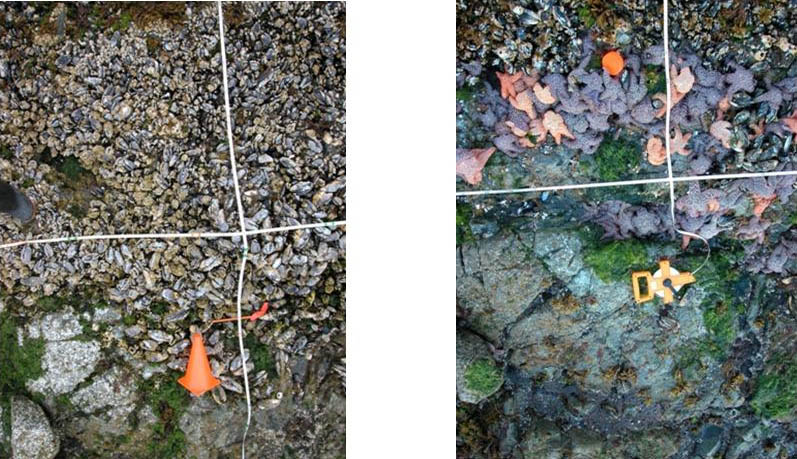 The lower distributional limit of Mytilus californianus before (left photograph) and one year after (right photograph) an experimentally induced increase in the abundance of Pisaster ochraceus. After one year the lower boundary of the mussel bed has demonstrated a significant upward recession.

As part of a collaborative effort with Fairfield University and the Northeast Fisheries Science Center of the National Oceanic and Atmospheric Administration our lab has recently completed a study looking at the impact of foraging by the invasive Asian Shore Crab, Hemigrapsus sanguineus, on populations of the blue mussel, Mytilus edulis. Our study suggests that Hemigrapsus can cause a 30% decrease in survivorship in populations of this conspicuous member of the Long Island Sound shoreline. When measured in conjunction with natural background mortality of this mussel the additional mortality imposed by Hemigrapsus can potentially reduce the ability of this economically and ecologically important organism to filter the waters in Long Island Sound. The ongoing loss of this essential ecosystem service may thus contribute to the severe hypoxic events that are often observed in Long Island Sound. Funding for this project was provided by the National Oceanic and Atmospheric Administration Fisheries Service.