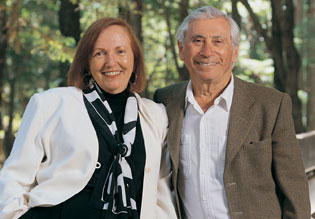 Jack and Peggy Downes Baskin settle into comfortable chairs in a living room appointed with significant art brought home like souvenirs of meaningful experiences around the world. A wall of French doors reveals a silent view of the sea, hanging like a faded watercolor in the distance, until darkness closes in like a curtain, and the conversation shifts.

Peggy is unsure of the exact moment she became clear in her drive to champion the rights of women, but she keenly remembers the moment she found her voice about it. As valedictorian of her graduating class from Carmel High School, she approached the podium on the stage in the Sunset School community theater, prepared but unwilling to give her speech on cheerleaders, football heroes and the school administration awaiting her praise. Instead, she spoke of the importance of bringing women into politics, which landed on a silent and stunned audience.She was 20 years too soon.

Morethan 60 years later, Peggy looks back on a life spent championing women inpolitics, in boardrooms, in classrooms, and in the community. The woman who went to Vassar on a full-ride scholarship and graduated magna cum laude in four years, who returned to college at age 52, commencing from the Claremont Graduate School of Government with a PhD in politics, is still championing education. And the woman who, in an era of housewives and homebodies, developed her career as a professor at Santa Clara University and UC Santa Cruz, where she focused on the politics of aging, women and power, and presidential management styles, is still championing women.

“Seven years ago,” says Peggy, “we founded the Jack and Peggy Baskin Foundation, whose aim is to encourage, support and sponsor the education of women. We want to help sendwomen to college, who really deserve the opportunity and would otherwise haveno chance. We’ve heard young women tell their stories of their mothers sayingthey must make something of their lives, and they must go to college to do so,but their fathers cut short the conversation by saying there’s no money. Wedecided we would step in for as many of these women as we could.”

The couple has long been interested in higher education. Inspired by their careers, Jack as anaeronautical engineer, and Peggy as a professor, Jack funded the Jack Baskin Schoolof Engineering at UC Santa Cruz, while Peggy advocated for female professors.

Jack’s interest in higher education was inspired by his father, an immigrant who worked 10 hours a day yet managed to go to night school to earn his high school diploma. When Jack graduatedfrom high school in 1936 and promptly found a job, his father insisted, despitefew resources, he go to college, instead.

“We forget what it was like to go through the Great Depression,” says Jack. “I went to the Universityof Colorado for $24 a semester, and got a good education. In 1940, a few of us were offered free flying lessons, if we agreed to join the Air Force after graduation. So I became a pilot. But when WWII was declared, they said, ‘Ittakes six months to train an Air Force pilot, and four years to train anengineer. Stay in school, and we’ll call you if we need you.’ I probablywouldn’t be here today had that call ever come.”

Despite their involvement in UC Santa Cruz, the couple was very pleased when CSU Monterey Bay opened, bringing exceptional opportunities in higher education to Monterey County.

“To witness this university emerging and developing in this area is exciting,” says Peggy, “and we’d like to get more involved. Jack and I both advocate for women in education. I know what it’s like to be told you’re not good enough, or tobelieve you are but not have the resources to get to college. General Stilwell’s wife gave me the winter coat I took to Vassar. What I learned then and still know now, is that this is a very supportive community. Through ourfoundation, we are going to continue to do our part to help women get theeducation they need and deserve.”

Jack and Peggy Baskin have supported the Women’s Leadership Council, which provides educational opportunities for re-entry students at CSU Monterey Bay. They also have supported the Osher Lifelong Learning Institute, an educational program for adults age 50 and above, interested in exploring traditional and new areas of knowledge. And they have endowed scholarships toopen the doors to education.