The Catalina frame is composed primarily of 1/2" (nominal) PVC pipe and fittings. These are inexpensive, easy to cut and glue, waterproof, totally corrosion resistant, and widely available in hardware stores and online sources.

The purpose of the frame is to support, align, and protect the major underwater components of the ROV. These are: 1 camera, 3 lights, 4 thrusters, 2 floats, and various wires.

We will start by describing several specialized parts of the frame, then conclude by explaining how to put it all together.

The thruster mounts attach the thrusters (motors with propellers) to the main ROV frame. In the photo below, you can see the white thruster mount connecting the black thruster motor in the foreground to the yellow frame. 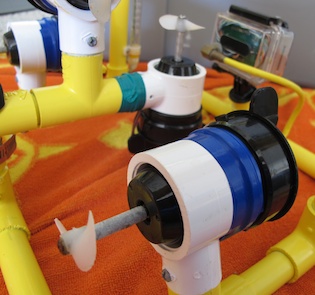 The thruster mounts are made by sawing the ends off a PVC “reducing tee” as shown in the next photo. We used a bandsaw, but you can do this with a hand saw, too. Note that we inserted a long section of 1/2" PVC pipe in the stem of the “T” and positioned the part against a wooden guide that was clamped in place. This allowed us to hold and align the part for a nice, straight cut without getting our fingers too close to the saw blade. 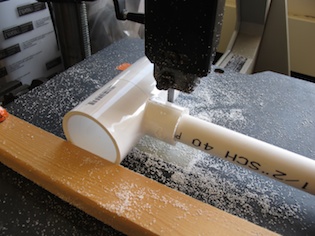 The final photo below shows an example of the thruster mount before and after trimming the ends off the “T.” 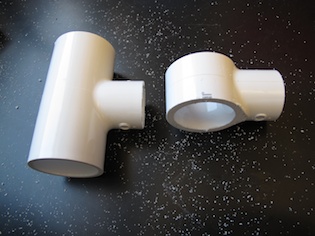 Before and after thruster mounts.

The camera mount consists of a GoPro tripod mount bolted by a 1/4"-20 stainless steel bolt, washer, and nut through a short piece of 1/2" PVC pipe that then gets inserted into a 1/2" tee in the front of the frame. 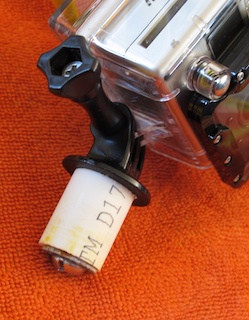 The photo above shows the bolt and washer at one end of the short pipe section screwed into the bottom of the GoPro tripod mount and used to clamp the tripod mount firmly to the PVC pipe. The GoPro dive housing attaches to the tripod mount using standard GoPro mounting hardware. 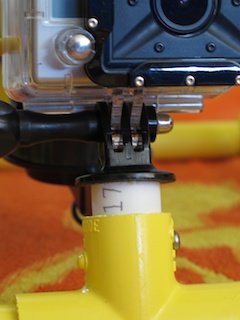 The photo above shows the camera mount inserted firmly into a tee in the front bottom center of the ROV frame and held in place with a stainless steel screw that passes through both the tee and the short section of PVC pipe. You’ll need to drill a small pilot hole for the screw to avoid cracking the plastic.

The mounts for the three LED lights are quite simple. Each light is held in place with a pair of nylon wire clamps and stainless steel screws that attach it directly to one of the pipe sections of the frame as shown. One light is mounted above the camera, and the other two to either side of the camera. It’s important to mount them as far away from the center of the camera as practicable to minimize backscatter from particles suspended in the water. 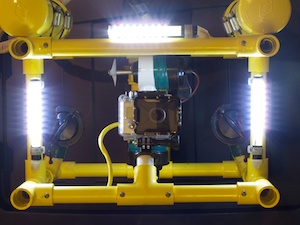 Two floats, each made from air-filled 2-1/2" (nominal) diameter PVC pipe sections with end-caps glued in place, are attached to the frame with stainless steel hose clamps. We put black heat-shrink tubing on some of ours to protect the paint from scratches and to give the whole thing a more stylin’ look.

In the photos below, you can see two floats (on two different Catalina ROVs in the top photo) clamped directly to the frame with hose clamps. These clamps make it easy to make slight adjustments to the float position to trim the vehicle, so it doesn’t lean too far forward or backward in the water. In the top photo, the clamps have been slipped through heat shrink tubing for a more professional look and to protect the paint. In the lower photo, electrical tape protects the paint on the floats from marring by the hose clamps. 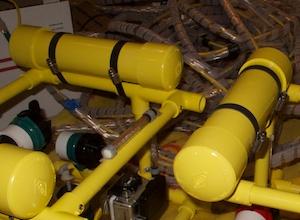 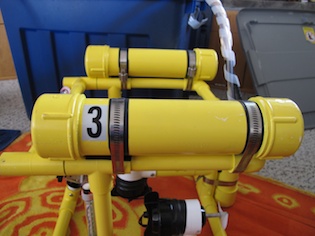 Putting the frame together

In our design of the Catalina ROVs, we decided to run the wires inside the frame. This has pros and cons. On the good side, it makes for a cleaner look with fewer loose wires to get caught or broken. On the down side, it’s harder to assemble and MUCH harder to repair if any wires need servicing, so it’s doubly important to make sure all wire connections are solid and well protected from corrosion. 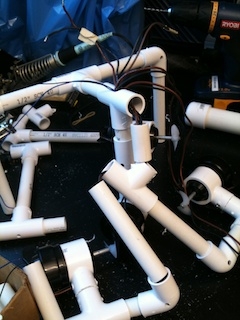 The photo above shows the tangled mass of wires and frame bits that occurs as the frame is assembled, because the wires for the thrusters, lights, and camera must be run through the frame as it’s being assembled. It would simply be too difficult to try to run the wires through the frame after it was all put together. Functionally, it works just as well to run wires on the outside, as long as you are careful to avoid loose wires that could get snagged on something or sucked into the propellers. 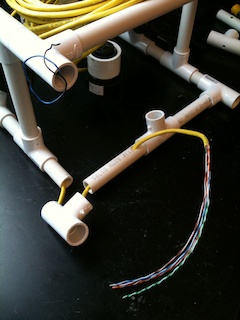 The Cat-5e cable, which is part of the tether, emerging from the frame near where the camera will be mounted as the final parts of the frame are being assembled.

This is a vertical section of larger diameter PVC pipe designed to hold and protect the vital wire splices that connect the long tether wires to the shorter wires coming from the camera, lights, and thrusters on the ROV. It has end caps drilled with lots of holes to facilitate rinsing and draining, so these delicate wire connections don’t sit for long periods of time damp with salt water between dives. You can use hose clamps or velcro cinch straps to hold the canister to the frame, as shown in the photo below. 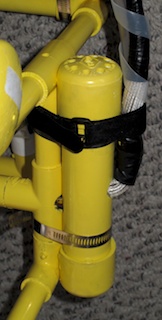 All of the thruster wires and other wires going into the frame exit through a hole at the back of the frame. That hole lines up directly with a corresponding hole in the wire junction canister. Inside the canister, there is enough extra wire that the splices can be pulled out for servicing after one of the end caps is removed, if needed.

Although the frame does not need to be painted, it can be fun to give your ROV a distinctive hue. We chose yellow to make it easier to see the ROV in water. We used spray paint specially formulated for use on plastic and taped over everything we didn’t want to get yellow. 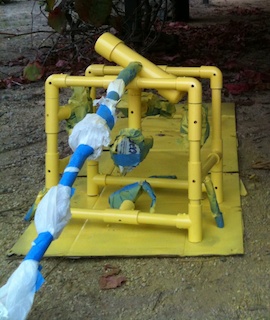