Most research projects in the EEL fall into one or more of three broad categories:

Documentation of Wrecks and Reefs through ROV-based 3D Photogrammetry

In collaboration with the Monterey Bay National Marine Sanctuary, we are developing methods for using small ROVs to gather video data for generating accurate 3D photogrammetry models of maritime heritage sites, including shipwrecks, particularly those that are below safe scuba diving depths. The long-term goal is to be able to revisit historically, culturally, or ecologically significant maritime heritage sites repeatedly to document any changes in the physical condition of these sites, which the Sanctuary is responsible for managing. We are also evaluating the techniques to see if they can be used to document changes in biological communities growing on rocky reefs or wrecks at mesophotic depths. 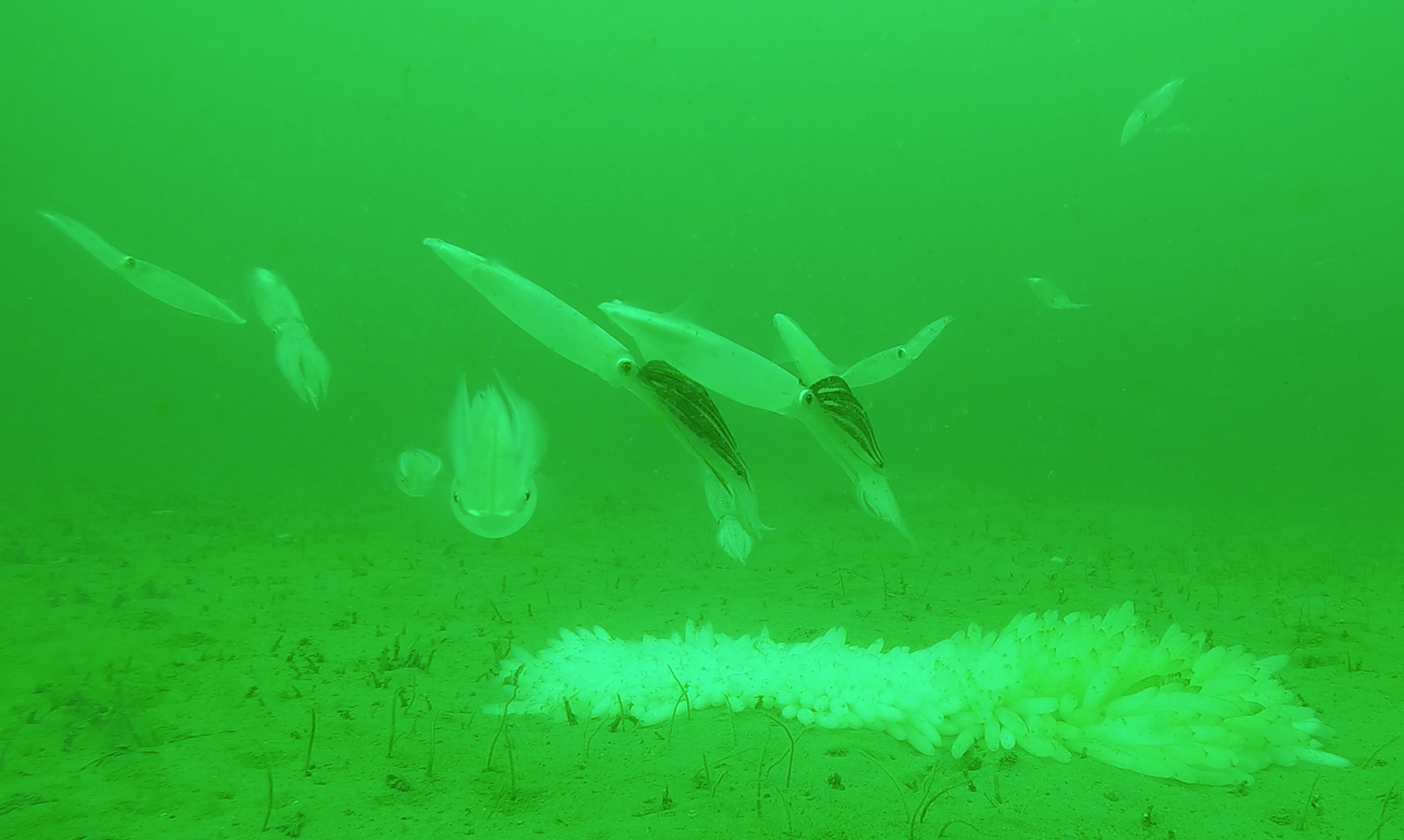 California Market Squid (Doryteuthis opalescens) are ecologically important as both predators and prey, and they comprise one of the most important commercial fisheries in California, yet the factors that control exactly when and where these animals aggregate to breed and lay their eggs remain poorly understood. In an effort to learn how to "think like a squid," the EEL has begun to correlate habitat characteristics with squid egg laying sites. We have also collaborated with the Gilly Lab at Hopkins Marine Station to develop and deploy underwater camera systems to record mating and egg-laying behavior of D. opalescens off Cannery Row. CSUMB’s Undergraduate Research Opportunities Center (UROC) has provided the EEL with a precision oxygen sensor, so EEL students can study how occasional, naturally occurring pulses of low-oxygen water affect the behavior of the squid and the survival of their eggs. With funding from C-DEBI and a CSU Faculty Support Grant for Engaging Undergraduates in Coursework Related Research, students in the EEL-affiliated course MSCI 337 developed two programmable, time-lapse video camera systems, called SquidPods to study the squid. In this photo, captured by one of the SquidPods, you can see squid breeding above their egg capsules. 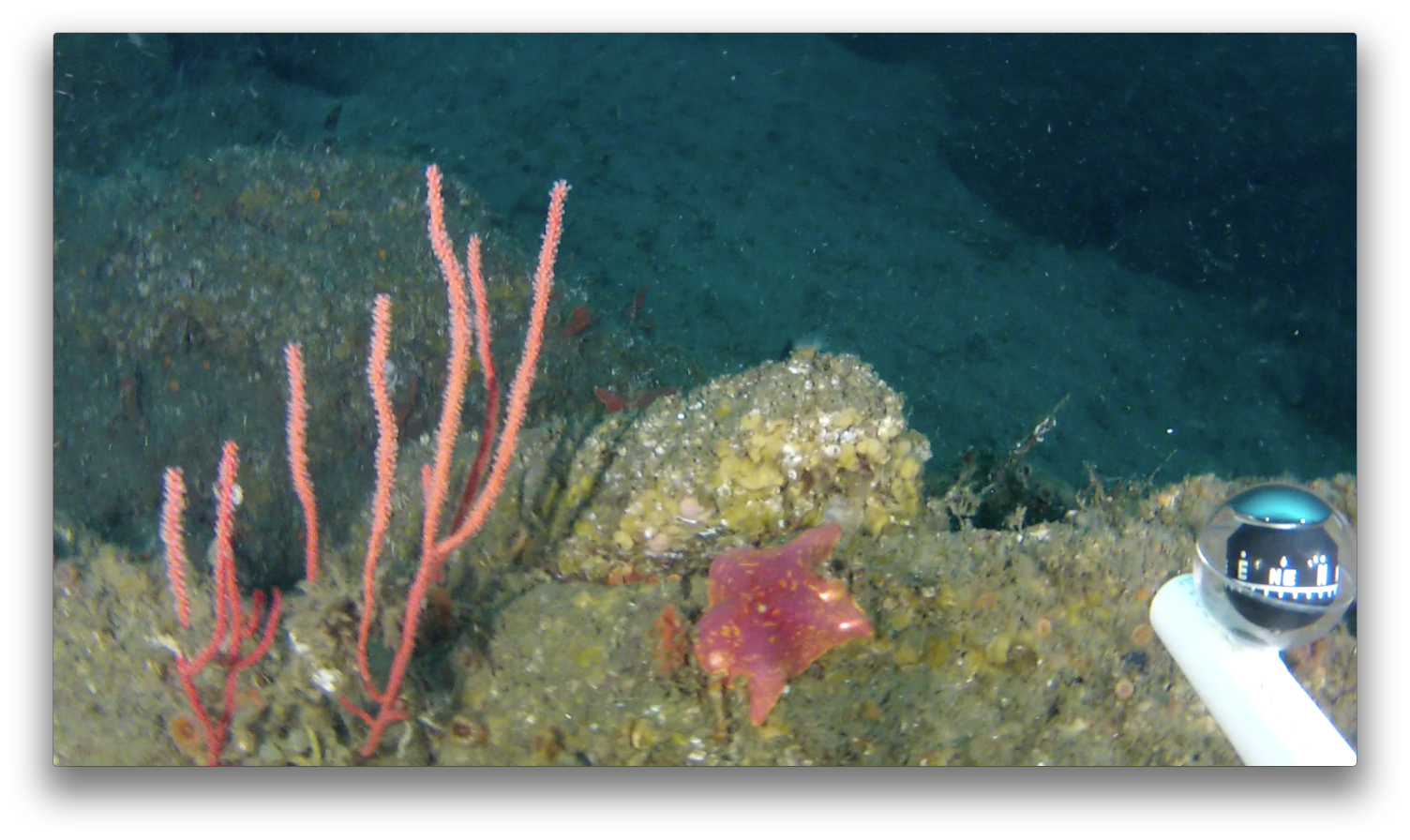 The Carmel Submarine Canyon (CSC) is a side branch of the well-known Monterey Submarine Canyon. The head of Carmel Canyon supports an amazing range of microhabitats and fascinating marine life, but it is exposed to open ocean conditions, making routine access somewhat challenging. We are developing custom technologies to make routine visits to this site possible, so that we can do a better job of documenting the dynamic changes that occur here. We kicked off this long-term study with small ROVs and small in-situ instrumentation platforms developed in the EEL with funding from NSF’s Center for Dark Energy Biosphere Investigations. This photo was taken by our student-built ROV "Ulithi." It shows a red gorgonian coral and bat star living on a rocky slope in the Carmel Submarine Canyon. 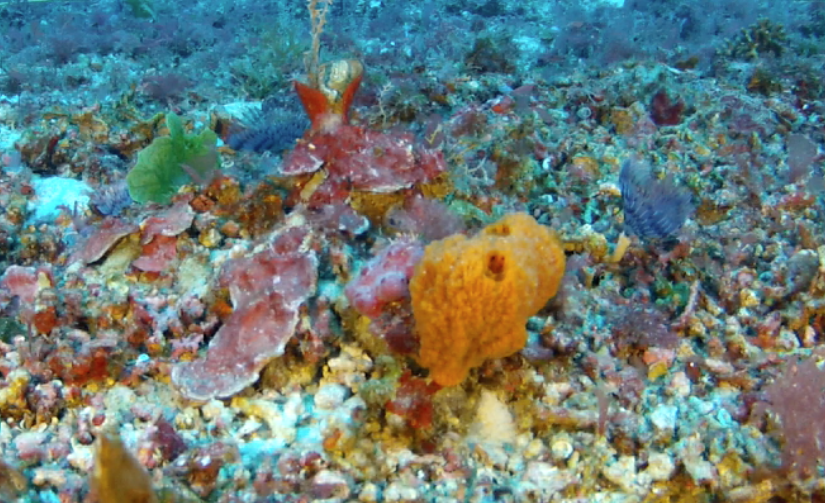 During the summer of 2015, EEL students Lauren Boye and Samantha Whitney joined Professor Moore and other scientists on an 11-day oceanographic cruise to characterize the biodiversity of Pulley Ridge, which is believed to be the deepest coral reef in U.S. waters. Using EEL's "Ulithi ROV," they obtained video footage of fish and invertebrates in water about 60 m (200 feet) deep in the Gulf of Mexico. The work was done in collaboration with two other teams on the cruise: an AUV team headed up by Dr. Arne Diercks (University of Southern Mississippi) operating the autonomous underwater survey vehicle "Mola mola" and a technical diving team lead by Dr. Marc Slattery (University of Mississippi) using rebreathers. Working together, the three groups conducted detailed surveys of several distinct sites. 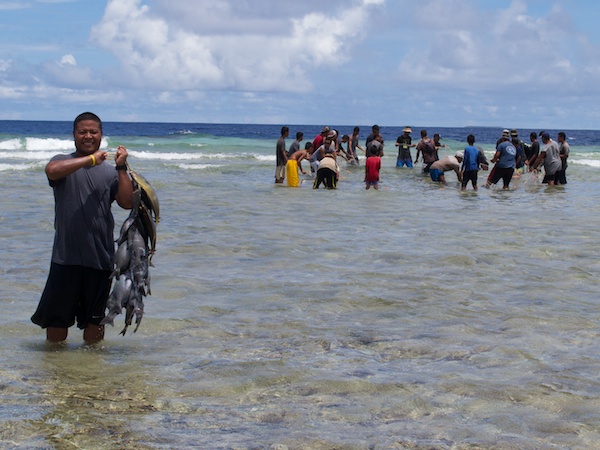 For countless generations, the people of Ulithi Atoll in Micronesia have obtained enough food and water from their islands and coral reefs to sustain their traditional culture. But changes brought about by WWII, sea level rise, and a gradual loss of traditional knowledge have made sustainability more difficult. In 2013, and again in 2016, EEL students were invited to join a team of dedicated reef ecologists, fisheries scientists, and native Ulithi islanders who are working together to better understand and manage Ulithi's living marine resources. The collaboration is called One People, One Reef. The EEL developed and used specialized ROVs and camera stations to gather information about fish populations and coral reef health from parts of Ulithi’s fore reefs and inner lagoon that are otherwise too deep to access for study. In this photo, fishermen from the Ulithi island of Falalop use a net to capture reef fish for food. 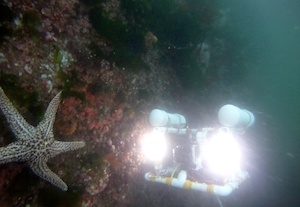 The Center for Dark Energy Biosphere Investigations has funded EEL students to develop of a small fleet of ROVs for outreach and education activities at the middle school through college levels. Young scientists can use these ROVs to explore marine life from a wharf, dock, or even a kayak. Three of these vehicles are based at the Wrigley Marine Science Field Station on Catalina Island. Three others support educational programs in the Monterey Bay area. Each ROV features precision joystick control, lights for night dives, and high-definition video recording. Here one of the ROVs checks out a sea star under the Monterey wharf.