This project, being conducted in collaboration with the California State Parks system, is a multi-year study of the ecology of Carmel Submarine Canyon, which is located just south of Carmel, California. The head of this canyon provides near-shore access to a wide variety of sub-tidal habitats including kelp forests, bare sand/mud bottoms, and nearly vertical rock walls. The bottom drops steeply into very deep water, so bizarre pelagic creatures from the open ocean can also be found here. 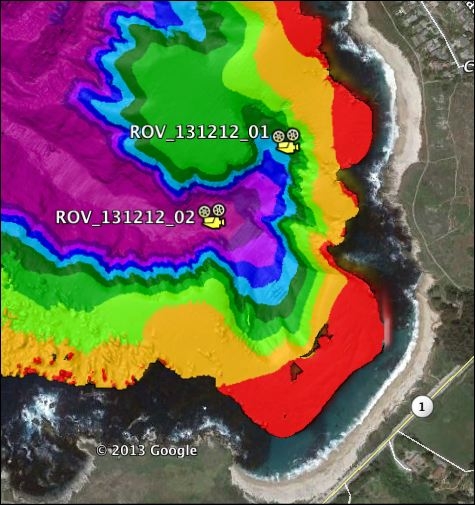 The image above shows the bathymetry (depth contours) of the canyon head superimposed on a Google Earth image of the Monastery Beach area along Highway 1, just south of Carmel. This high-resolution depth data was provided by CSUMB’s Seafloor Mapping Lab (SFML). Each colored band represents 10 meters (about 33 feet) of depth, down to 90 m (295 feet), beyond which everything deeper is shown in magenta. To explore and study this canyon, we are using an ROV and a set of deployable instrument platforms designed and developed by CSUMB students with funding from NSF’s C-DEBI program. This equipment is capable of working at depths of up to 150 m (500 feet), so we can reach, explore, and study most of the area pictured in this bathymetric image.

We launched our CSC study in December of 2013 with the first in a series of ROV surveys at strategic locations around the head of the canyon, all the way from very shallow water near the beach to our current maximum working depth of 150 m (500 feet). The two small video camera icons mark the location of the first two deep ROV dives our lab made in the canyon. Our initial, exploratory observations will form a baseline data set we can use to detect and analyze changes in the spatial or temporal abundance of organisms in subsequent years.

To give you an idea of the wonderful diversity of life and terrain present in the canyon, here are just a few frame grabs from videos we've taken at several different places in the head of the canyon using our C-DEBI-funded ROV: 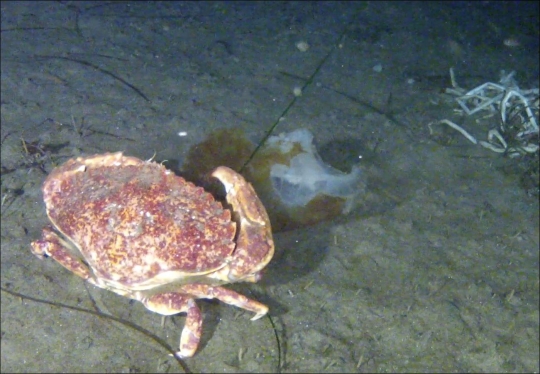 We found this rock crab eating a dead jellyfish on a sloping sand/mud bottom at 110 m depth. The white soda-straw like objects in the background are tube worm casings. 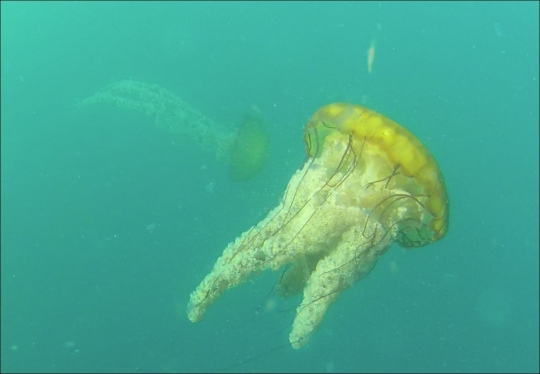 We passed dozens of Sea Nettle Jellyfish (Chrysaora fuscescens) as the ROV was descending through deep water toward the bottom. 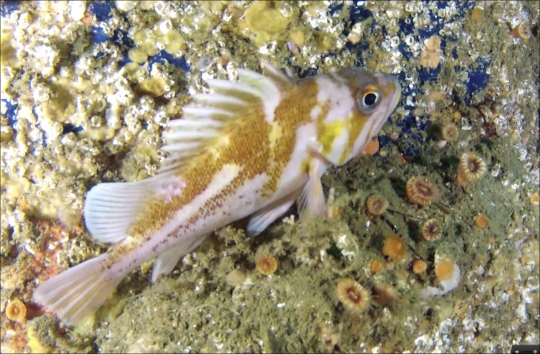 We found this Copper Rockfish while exploring a steep rocky cliff. It was resting on the rock surface, which was covered in cobalt blue sponges, brown cup corals, and polychaete worm tubes at a depth of 45 m (about 150 feet). 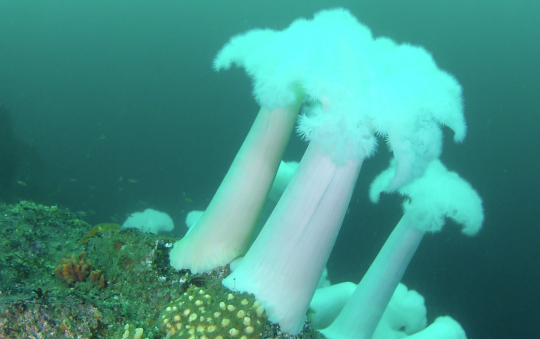 These Metridium anemones are about 60 cm (2 feet) tall. They were growing in a cluster at a depth of 41 m (135 feet) near the top of a steep rock wall. The yellow dots on the rock are part of an aggregated nipple sponge. 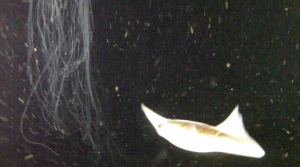 Here a Market Squid (Doryteuthis opalescens) approaches the dangling tentacles of an Egg Yolk Jellyfish (Phacellophora camtschatica) at a depth of 100 m. Interestingly, the squid was able to slip, apparently unscathed, through the tentacles and up under the bell of the jellyfish, where it appeared to reach out and grab something (a food morsel?) from the underside of the jellyfish before jetting away.