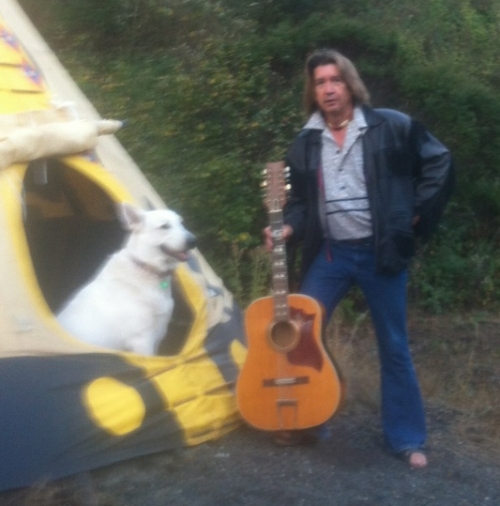 George was born in Ponca City, Oklahoma. For the first few years of his life , his father (David) of Osage and Kaw descent and mother (Carolyn) raised him on Uncle Lessert’s ranch on Kaw tribal land. David moved the family to attend the Haskell Indian College in Kansas. After graduation, he accepted a job with the Bureau of Indian Affairs (BIA) as an Adult Education Specialist. The family moved to the remote Bannock Creek region of the Fort Hall Indian Reservation. This move was the first of a series of moves for the Baldwin family as they followed David's career with the BIA. Moving from one reservation to another, George, his brother Robert and sister Marcylyn became "BIA brats". They lived in government housing and attended Indian schools on the Shoshone-Bannock Reservation (Idaho), Umatilla Reservation (Oregon), and the Yankton Sioux Reservation (South Dakota). David was honored by the Osage Tribe during the early 1970s: the family returned to Oklahoma where David was appointed as the first tribal member to serve as the BIA Superintendent for the Osage Tribe. David is retired today and lives in Fort Gibson, Oklahoma. Carolyn is a well known Oklahoma environmental activist and lives not far from Tulsa.

George received his B.A. degrees in Psychology and Sociology from Northeastern State University in Tahlequah, Oklahoma (the capitol of the Cherokee Nation). At Oklahoma State University, he completed his Master's degree in Indian Manpower Economics and he published his first study on American Indian employment patterns in Osage County. His Ph.D in Social Psychology is also from OSU, where his areas of specialty are Research Methodology, Social Ecology, Complex Organization, and Deviant Behavior

Currently, he is a Professor at CSUMB in the Division of Social, Behavioral and Global Studies. As a founding faculty member at CSUMB, he has served the institution in a variety of positions, including planning faculty member, co-author of the first 10 Year Plan, member of WASC accreditation committees, as an academic senate member, Vice President of the CFA chapter, faculty sponsor for the Martial Arts Club and as Dean of the Social and Behavioral Science Center during the fall of 2002. He acted as Chair for the Division of Social, Behavioral and Global Studies for over 8 years.

In his current position, he serves the people of Monterey County by directing nearly a dozen social science program evaluation projects for community organizations. These studies are designed and published by his students as part of the University’s service learning pedagogy. He teaches research methods courses in the Psychology Dept. and in the Social and Behavioral Sciences Dept. teaches a range of courses in the interdisciplinary major including research methods, social psychology, sociology topic courses, and a specialty series in Crime, Violence, and Terrorism.

For the past decade, George's research interests have defined him as a "futurist." His work has focused on the potential role of technology, especially telecommunications and multimedia as a development tool for rural communities. He is the former Director of INDIANnet, the first Indian owned nonprofit community computer network and the former director of the INDIANnet Census Information Center. During the last century he assisted numerous tribes with reorganization and development issues related to telecommunication policy and organizational change brought on by casino income and explosive growth in tribal enrollment. His concerns for equity of access to information technology and the creation of an "information poor" lower class played a central role in his policy studies during the early 1990’s. This work was funded in part by the National Science Foundation’s Technology and Values Program and the Kellogg Foundation. His research and demonstration projects were supported by grants from the W.K. Kellogg Foundation, the National Science Foundation, the National Network of Libraries of Medicine and the National Endowment of the Humanities. He has consulted for numerous agencies, including the Department of Commerce (Telecommunication Infrastructure Assistant Program, Census Department, the National Science Foundation, and the Smithsonian (National Museum of the American Indian). He has successfully lobbied for Indian people, including the inclusion of Native people in the telecommunication provisions of the Farm Act.

His publication record covers a range of topics including the social construction of Indian identity, outcome based education, online college courses, music, poetry and works related to identity construction and the Internet. He is the cofounder of one of the largest independent marital arts organizations in the United States, and is internationally recognized as a Grand Master 9th degree in TaekwonDo.

George lives on a “mini-farm” in Prunedale, California -- roughly 5 miles from the coast with his beloved white German Shepherds and a dozen chickens. He has a busy tribal consulting schedule, music performances, self defense / mixed martial arts seminars, lecturing, and visiting his two adult daughters (Angela and Dianna) who live in the Berkeley area.